Back in Mazatlan, after brief stateside visit

Well, we've returned back to Bravo after a 6 day whirlwind visit to Seattle.  Wow, the pace was hectic after getting used to life down here in Mexico for the past 4-1/2 months!!!  From the moment we stepped off the plane at LAX and dealt with customs, to our arrival back in Mazatlan, it was really a full tilt boogie all around!   We got to see many friends while back up north, but missed seeing a good many more.  Sorry about that...we'll do better on our visit this summer, where we hope to spend two or three weeks.

Speaking of LAX customs, we had a weird episode at the immigration window.  Adam's passport photo has his face hiding behind his full beard.  To those who haven't seen him in a while, he's now trimmed for speed!!!  Clean shaven for the first time in many a year!  (Dive mask fits much better, and it's a lot cooler as well)  Well, immigration officers don't take kindly to this sort of blatant attempt to change one's identity.  He wanted Cindi to advise him of any "distinguishing marks or characteristics" which would identify the reprobate, as well as prove that we are married (he also wasn't happy about married couples having different last names!!!).  Thinking officer was kidding around (he wasn't), and that he was probably in a joking mood (he wasn't), Adam couldn't help but let out some snide comment, purely in jest (have you noticed, immigration officers don't joke around...Adam made note to self..."immigration officers don't joke around!!!).  After a flurry of quick apologies all around, and trying hard to repress our giggles, we were allowed to proceed to the rest of the re-entry process.  No harm done!

The week in Seattle flew by, and we picked up a lot of items which are difficult to find in Mexico that we've come to want aboard Bravo.  Some mission critical (new raw water pump for genset), some nice to haves (new manifolds to replace the leaking ones on the watermaker), and some, well, how do you categorize a flat screen tv to better watch movies???

Getting it all down here was no picnic.  Even with our T.I.P. (Temporary Import Permit for yachts in transit) the customs officers were out to get SOMETHING!!!  They gave us a "good deal" of about $70 US (could have been as much as $300.  Said we could go the following day to the customs office downtown (about $80 round trip from the marina) to avoid paying anything while saying, knowingly, "most people just pay the duty"!!!  Felt like a shakedown, but "whatchagonnado"???

So we're back aboard at last.  Busy with a myriad of repairs and projects.  Friends David and Diana are coming down today for a couple of days in Mazatlan before we head out by bus and train to the Copper Canyon for some exploration and hiking.  Then it will be time to cross the Sea of Cortez along with the hordes heading north for the spring (25 boats left here yesterday!!!)

Had a great time at the Sunday market in the Juarez neighborhood of Mazatlan.  12 blocks of street stalls selling everything imaginable (and some not so...)  Here are a few pix...

Well, the weather window opened as anticipated, and we left La Cruz last Tuesday, 3/29, headed around Punta de Mita for an anchorage in Chacala Bay, approx 45 miles away.

Had a great day, w/ a good sail, close hauled most of the way to Chacala.  Anchoring in Chacala proved unbelievably rolly, as it's very open to the ocean swells.  One boat was using a stern anchor to keep pointed into the swell, and during the night, we certainly wished we had as well.  Not a lot of sleep that night, as we got tossed around the bunk.

The next day we woke to flat calm, and we motored out, heading north approx 150 miles to Mazatlan.  What little wind we had, up to 7 or 8 knots, was all right on the nose, and we motored and motor sailed all the way to Maz, arriving at the Stone Island anchorage at around 9am.  Saw several whales, with some grays breaching fairly close to the boat.  Also a few turtles bobbed by during the day.  One fish brought aboard, a little skipjack tuna.  Not great eating, we sliced him up into bait strips for the yellow fin and dorado which must be soon to follow!!!  All in all, a very calm passage, but we certainly motored a lot more than desired.

One scary sight was the flag at the end of a long line fishing rig, which panga fisherman set miles out in the middle of the ocean.  Happily we sailed by the right side of the flag in the evening, only missing it by around 100 feet.  Another boat reported getting caught up twice during the night, and having to stop and cut themselves free.  Amazing that the fisherman use BLACK flags to mark the nets, with no lights. 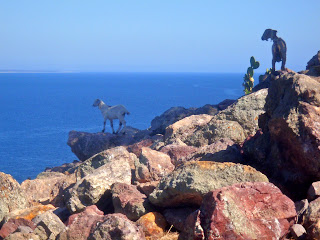 We anchored at Stone Island, a beautiful spot right outside of Mazatlan's big commercial harbor entrance and the city's "Old Mazatlan" section.  We took the water taxi over to explore the city, which really is beautiful.  Great historical sites, as well as a fantastic market, beautiful malecon beach walk, and excellent restaurants.  Benji's, right on the beach at our anchorage, had a special pizza, the "Shrimper", with shrimp, garlic, and ham....damn good!!!  And the hike up the hill behind the beach, complete with the local goat herd, had spectacular views of the city beyond the port.

A few shots of Old Mazatlan:


After two nights at anchor, we headed this morning to the marina district, about 5 miles north in an area known as "Nuevo Mazatlan".  Three marinas here, so many boats we've heard on the radio or met over the past few months are moored.  We just had a quick walk about, and the area is a pretty harsh contrast to the pretty and "seasoned" ambiance we experienced in Old Maz (not to mention La Cruz before that).  It's, well, as the name says, "Nuevo", or "New".  Pretty sterile, with resorts and condos surrounding the marinas.  There is an active cruiser's community here, though, so should be some good activities, such as tomorrow's bike ride, to keep us occupied until we fly to Seattle for a weeklong visit next week.

A boat checked into the local radio net yesterday, saying he was entering the marina on an "S&M 49".  Said he was here because he had heard Mazatlan is famous for it's great leather work, especially with studs.....Ahhhh, ya gotta love April 1, celebrated all over the world!!!!!
Posted by Adam at 11:54 AM 1 comment: