Welcome to our blog, describing our voyage aboard the two BRAVO's; the first boat a Kelly Peterson 46 with homeport in Seattle, Washington. The second is a Boreal 52. We headed south in 2010, and have been voyaging in one form or another since. Cheers, Adam and Cindi 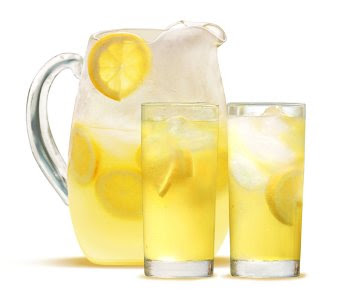 it's time for an icy cold lemonade!!!


Wow, hard to believe a half a year has passed since the last blog post.....Once again, I'd ask indulgence from you, dear loyal readers, but I can hardly blame all of you for long ago abandoning this ship!!!!  Nonetheless, I do see that the blog still gets several hits a day, so at least someone must be out there looking for an update!!!

So here's what the Bravo crew has been up to.......and where it's heading.......
In the last post we mentioned that we were heading back to the US for Thanksgiving. And yes, that happened.....the usual annual fest at the Hawkens Frog Dog Farm in Anacortes was wonderful as always. And it was terrific to see other friends, mates, and family from the Seattle area as well.


But one thing wasn't quite so terrific on this visit. Cindi had been continually bothered by pain in her left wrist, the one that she broke in the fall 6 months earlier. While in Seattle we decided to see an orthopedic surgeon specializing in hands and wrists. He took one look at her wrist, quickly measured angles, and confirmed that she needed full surgery. Rebreak the bone (which had set at a bad angle), do a bone graft w/ a putty of cadaever bone and her own stem cells harvested from her hip, slap on a titanium plate with 10 screws, sew her up and she'd be right as rain!

Didn't seem to be any other options, so she went ahead with the surgery.  Afterwards, we flew back to New Zealand, and she has been a physical therapy fanatic ever since.  We go to the gym every day, and she's been doing 3x daily wrist exercises.  She's even been wearing an electronic gizmo, a "bone growth stimulator", which keeps zapping her wrist, 24/7, with electric currents through electrodes.  Seems a bit like snake oil, kind of like strapping a magnet to your arm, but what is there to lose, and perhaps it will help.

Unfortunately, on x-rays taken 6 months after the surgery, the damned wrist didn't look like it was healing. The doc in Seattle was useless as tits on the proverbial boar, saying that "his screws" appeared to be holding and "until it hurts, you should be fine with sailing this summer.....and if it starts to hurt, it means the screws are pulling out, and you should come in for more surgery!!!)   Meaning the Seattle summer sailing the light winds in the San Juan Islands near Seattle, not dealing with offshore weather as we voyaged next to Vanuatu, the Solomon Islands, Papua New Guinea, and Palau, none of which are at all famous as Centers of Orthopaedic Excellence.

It seemed like a second opinion was called for.  We found a terrific doc in Auckland, another hand/wrist orthopod, but an avid sailor and kayaker as well.  He was down to earth, frank and open, and not at all of the "holier than thou" school of medicine of which it seems most US surgeons are enthusiastic alumni.  Mr. Foster (that's right, MR., not DR.; even the sign on his office lists him this way!  No white coats here) agreed that the wrist x-rays showed little sign of healing.  But he felt that a CT scan might show better resolution of what could be shadowed by adjacent tendons and the other arm bone.  He got us right into imaging, and within an hour we were back in his office to review the digital slices.  It was more promising, as we could now see threads of calcification starting to bridge the gap!!!  Fantastic!!!  We are now much more hopeful that with time, this may yet heal without another surgery!!!

But our 1 year extension to our New Zealand visas, granted due to the accident, expire in mid June. And the post-cyclone cruising season is upon us, with most boats already departed to the tropics. We don't feel that it would be a really smart idea to risk rebreaking the weakened bone in a fall aboard, especially hundreds of miles at sea.

So, where does that leave us?

Well, remember that pitcher of lemonade??  We've decided that rather than risking the wrist with passagemaking, especially in remote regions, to take a new direction for adventure.....  After our current 2 week sea trial cruising the Bay of Islands of northern New Zealand, we'll store Bravo back on the hard in NZ (in the same boatyard that we've lived for the past 1-1/2 years!!!) and fly on June 5 to Melbourne, Australia.  Stop in and visit former cruising mates Deb and Don of s/v Buena Vista.

We had originally fantasized about finding a suitable off road Unimog like this bad boy: 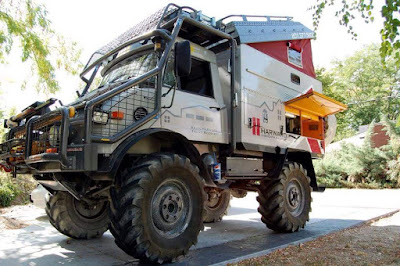 These rascals are the holy grail in the subculture of international off-road adventurers, but they're just a bit (like $200,000) over our budget. 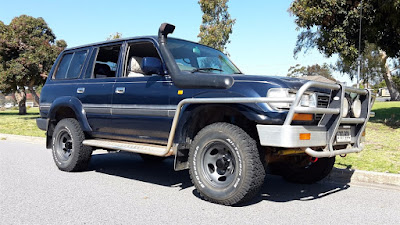 Instead, we've found and purchased an old beast of a Toyota LandCruiser, a grizzled outback veteran fully equipped for stream crossings, rock hopping, and desert storm, and with a roof rack and a roof top tent, we'll take advantage of the southern winter (the dry season in northern Oz) and head out to explore the Australian desert and outback for the next several months.  Searching for Crocodile Dundee!!!  What could possibly go wrong?????   Stay tuned.....


Our 2 year permit to keep Bravo in NZ expires in November, at which time she must either leave the country, or be officially imported, paying many thousands of $ in tax and fees.  Not good.

The plan is to leave our truck in Oz in October, and fly back to NZ.  Cindi will get new scans, and assuming all is good, we will sail Bravo over to Australia.  Possibly via New Caledonia. Put her in a marina there, and continue to explore by land until roughly April, when we'll sell the truck (original owner wants to buy her back!!!), jump back on Bravo, and explore the Whitsundays and Great Barrier Reef, before departing Oz in early June, likely for Indonesia and SE Asia.

So that's been the change in plans. The pitcher of lemonade, if you will.......It's been a frustrating and disappointing last year and a half, as we now watch the international cruising fleet depart without us from New Zealand for the second time. But we're excited about the new Oz adventure in front of us to explore some of the really remote regions of the Australian outback, Tasmania, and the inland deserts for the next year, before resuming our water borne lifestyle once again.  Our 1 year visas for Australia have just been approved, so we'll be good to go in about 2 weeks!!!

What have we been up to for the past 6 months, anyway, besides dealing with Cindi's recovery?  Well, for one thing, Bravo's projects continued to take up most of our time.  Now this next bit may get a bit.......ummmmmmm.......ok, BORING for you non-geek types who have managed to read this far.  Sorry 'bout that, but it's what we do when not out cruising. 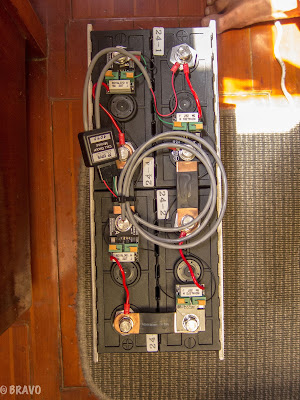 Electrical:  The lithium battery project proved to be a challenge.  Working with electrician Scott, we designed and installed what we think is a state-of-the-art lithium battery bank.  As we learned, changing over from traditional lead acid batteries is not simply swapping like-for-like.....rather it required a full rethink of all systems even remotely related to batteries and their charging, monitoring, and use.  We installed a BMS (Battery Management System) more typically used for electric vehicles.  It sends the 12 individual cell parameters (temp and voltage) to a computer brain, which monitors and can shut down either charging or loads via large relays to ensure the safety of both the batteries and the boat.  It reads out via Bluetooth all of the battery info to an Android phone app.  Sweet as!  If anyone has questions re: the installation in more detail, feel free to email for the good, bad, and the ugly. 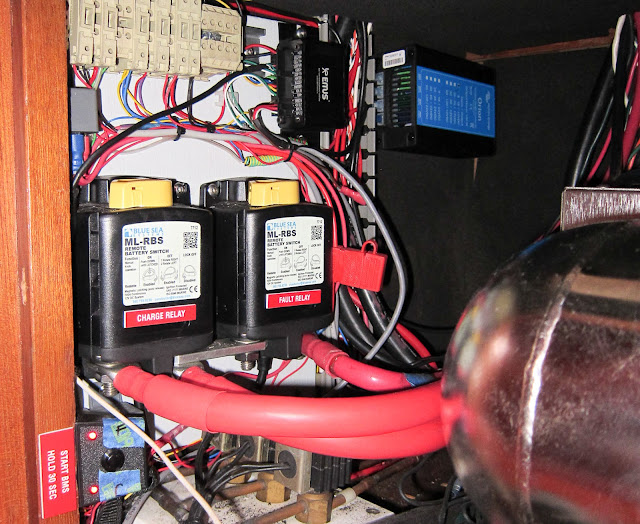 Getting all of this to work properly was not for the faint of heart.  Due to firmware and software growing pain issues (the system is designed and manufactured by some genuinely bright engineers who happen to be in Lithuania) it took a while for all of the components to play nicely together in the same sandbox.  New voltage regulation and battery capacity monitoring was required.  Some systems need work arounds to deal with the different voltages and charging algorthms.  But, knock-on-wood, things seem to be working very well at this point, and we're really enjoying the benefits of the lithium world, mainly amazingly fast charging, and deep level of allowable discharge.  We can now utilize approximately 80% of our 600 amp hours, instead of the 35-50% we were able to use before.  Also, the batteries stay at approximately 13.2 volts for most of their discharge cycle, which makes all electronics and motors very happy.


Other projects we've recently completed include: 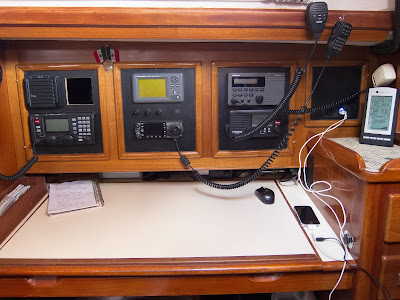 All projects have proven to be great successes, albeit not without a couple of teething pains discovered on sea trials over the past couple of weeks.  More on the sea trials in subsequent blog post(s).

In an effort to quickly get us caught up and back into the blogging mode, here are just a few vignettes of the past 6 months..... 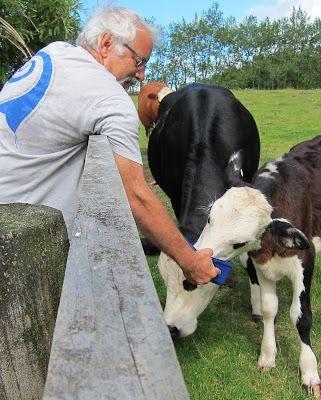 Other than boat projects, we've enjoyed our further explorations of NZ's north island.

We've had a couple of house sitting gigs for kiwi friends away on holidays.  Great opportunity to get out of the boatyard life for a while.  Both were on small farms, so we got a taste of cattle, sheep, donkey, and chicken husbandry (do you Americans remember the TV show "Green Acres".....thought so.....) as well as looking after two great labrador retrievers.  Good fun!


We never grew tired of the constantly changing view from Bridgette and Dave's deck..... 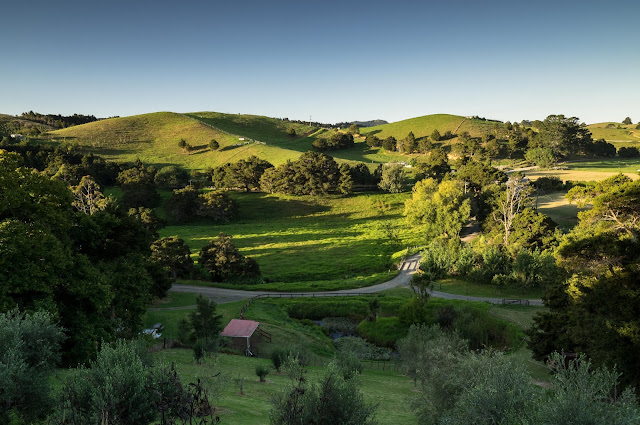 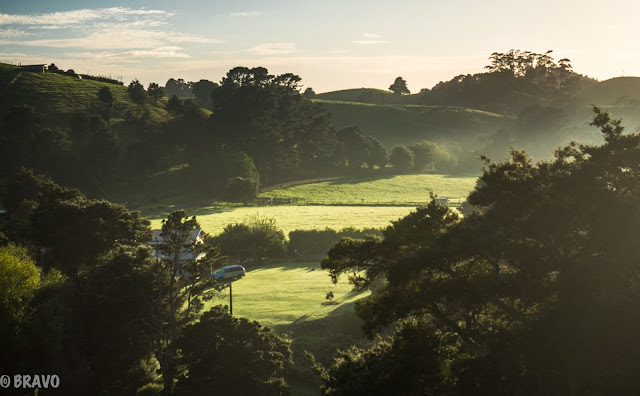 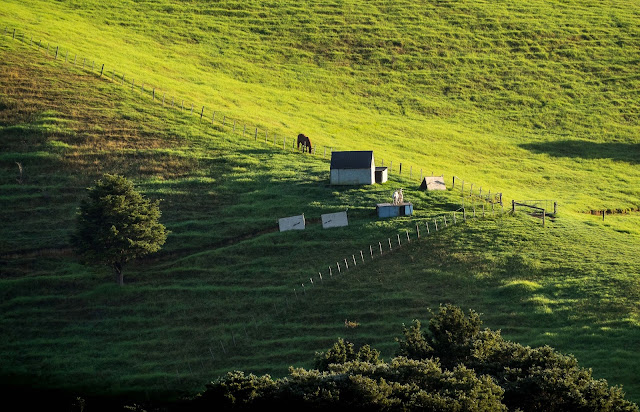 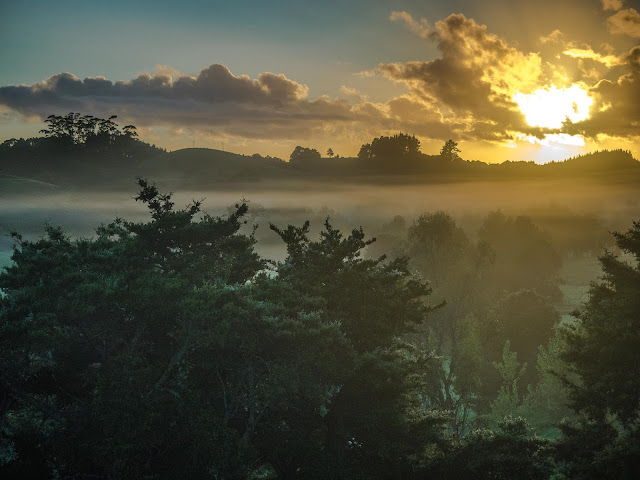 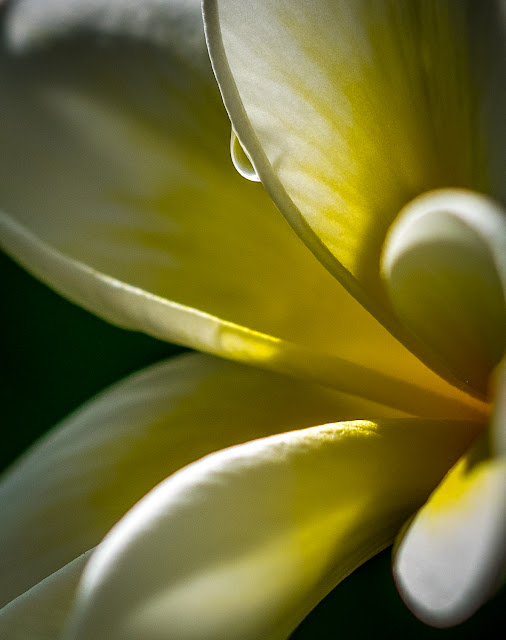 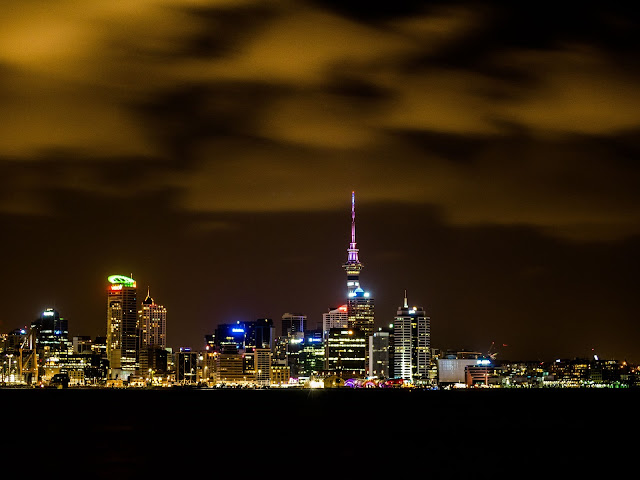 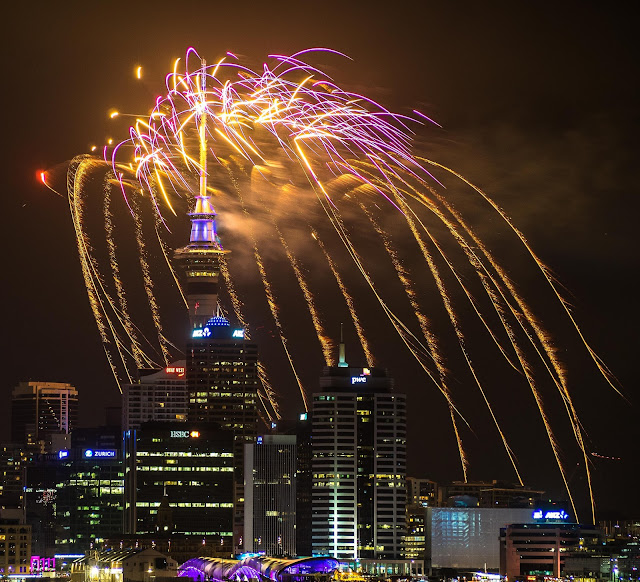 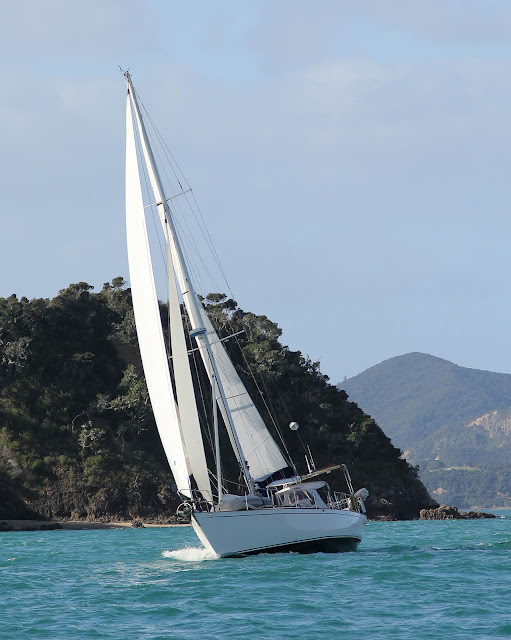 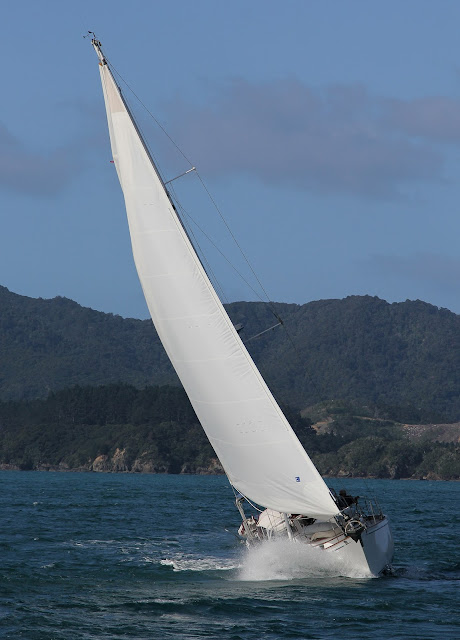 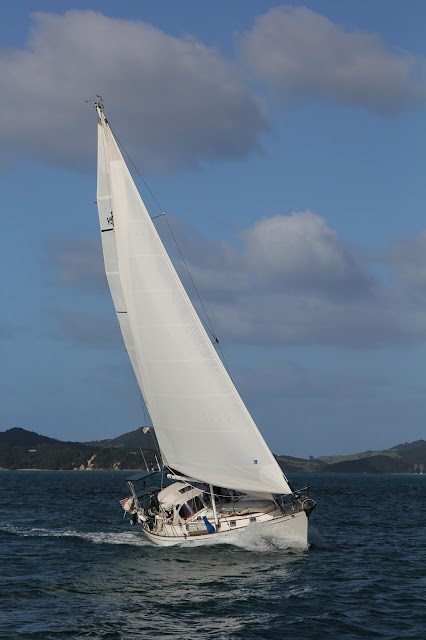 This country of New Zealand and her people are special indeed.  We feel so fortunate to have had the opportunity to spend the past couple of years here. 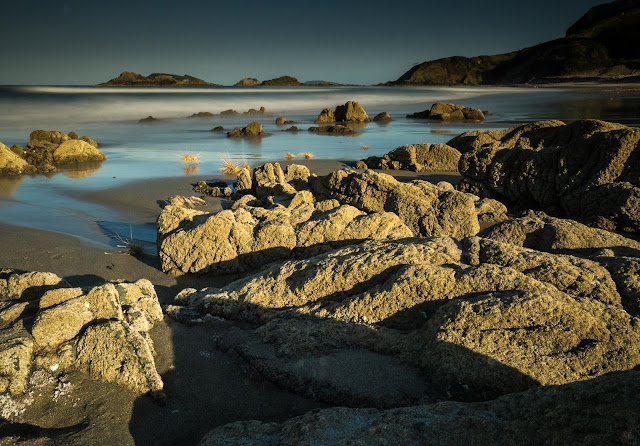 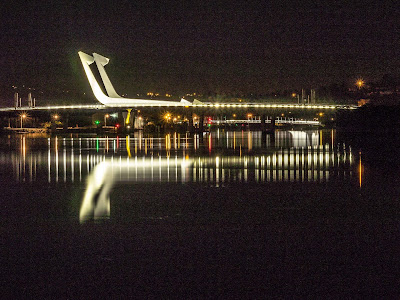 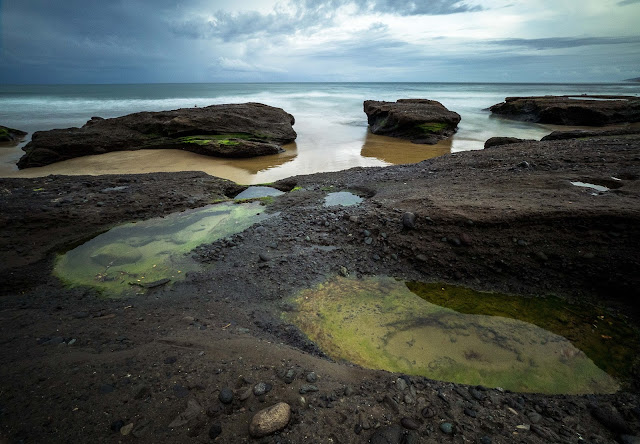 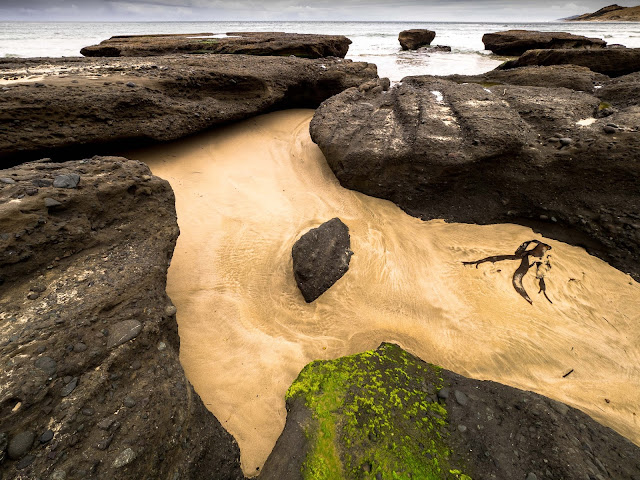 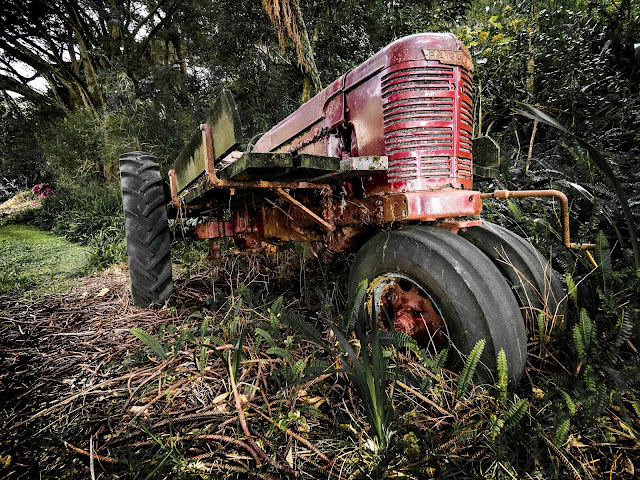 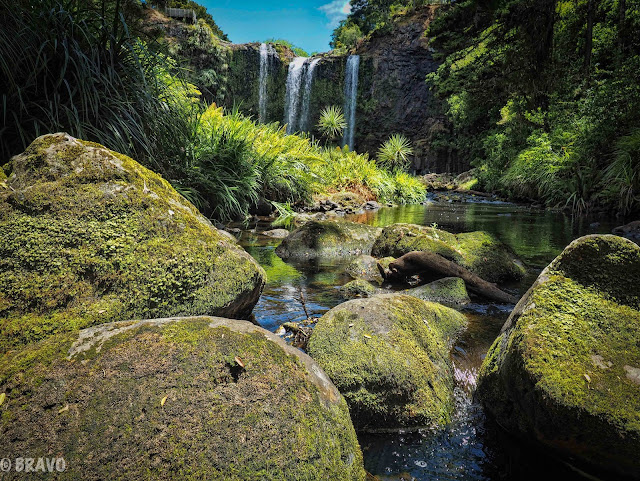