Wikipedia describes "PARADISE" as "a religious or metaphysical term for a place in which existence is positive, harmonious and eternal.....Paradise is a place of contentment, but it is not necessarily a land of luxury and idleness."

We recently completed our 2 week visit to Suwarrow Atoll, a series of motus ringing a lagoon in the middle of nowhere (actually a part of the northern Cook Islands, but several hundred miles away from the nearest other island).


Suwarrow is a national park, the only one in the Cook Islands.  It's caretakers are two terrific rangers, Harry and Charlie, who are stationed on the largest island for 7 months each year.  They receive minimal support from their government, and rely to a large extent on their interactions with cruising yachties for gas, staples, and fishing tackle.  Native Cook Islanders, both of them proved to be terrific hosts, as they proudly welcomed us to their remote Pacific outpost.  Charlie, in fact, spent his childhood growing up on Suwarrow, and this is his first year back, after spending the past 29 years in New Zealand and Australia.

Charlie enjoyed giving us the "true history" of Suwarrow, not missing any opportunity to mention Tom Neale and his account in his book, "An Island to Oneself".  In a nutshell, the book according to Charlie was total "Boo-Shit".  "An Island to Oneself???????"......Boo-Shit!!!"    Charlie and his father, along with another family, lived on the island the entire time that Neale was there.  "Tom Neale say he built the concrete wharf by himself????  Boo-shit!!!"  And when Tom Neale's brother, as well as 6 other fisherman wrecked their commercial fish boat on the reef, it was Charlie and his dad who went out to rescue the men.  They only found one, Neale's brother, or what was left of him (remember those sharks???  And a fish boat with hundreds of bloody tuna washing up on the reef?????  Not pretty.....)  They buried what was left there on the island.

The atoll is a popular spot for yachts to visit on their way to western cyclone havens in Tonga, Fiji, New Zealand and Australia.  Anchoring can be a bit of a challenge, with the entire lagoon strewn with coral bommies to snag anchor chains, but in the prevailing SE tradewinds the reef keeps the swell down, and we slept like babies in the calm waters.

A main attraction of Suwarrow is it's very remoteness.  No supply ships, tour boats, or cruise ships make their way here, and of course, there is no access by air.  The coral in most places is pristine, with spectacular hard coral structures of many types.  The lagoon is also famous for it's sharks, and it lived up to it's reputation, as reef sharks were our constant companions the entire time we were there. 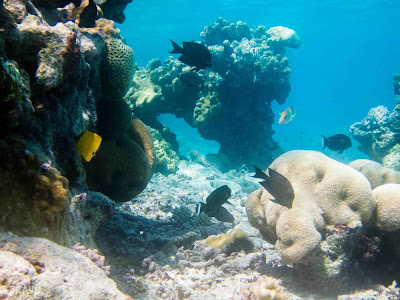 The snorkeling was good, especially on the outside of the reef where the fish were most plentiful, and at a manta ray cleaning station just a few hundred yards from our anchorage. 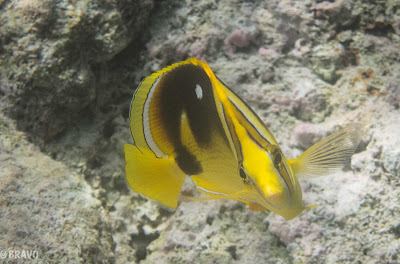 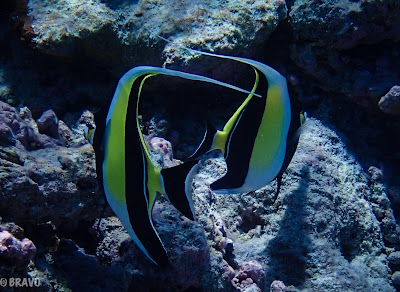 The mantas gather every morning, and we loved jumping into the dinghy for a snorkel session with these plankton eating giants (these rays measured 10-12 feet across). 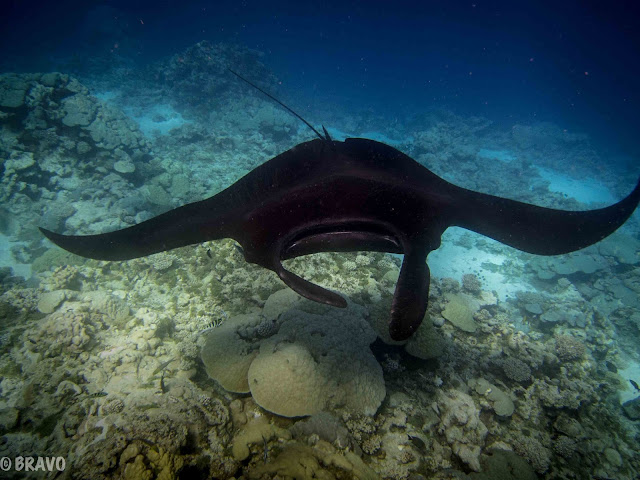 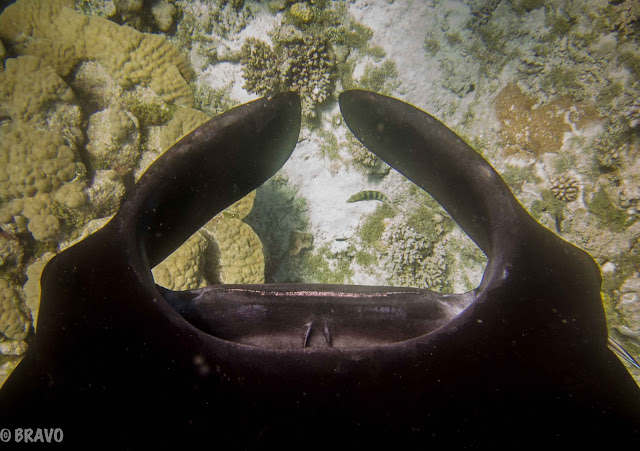 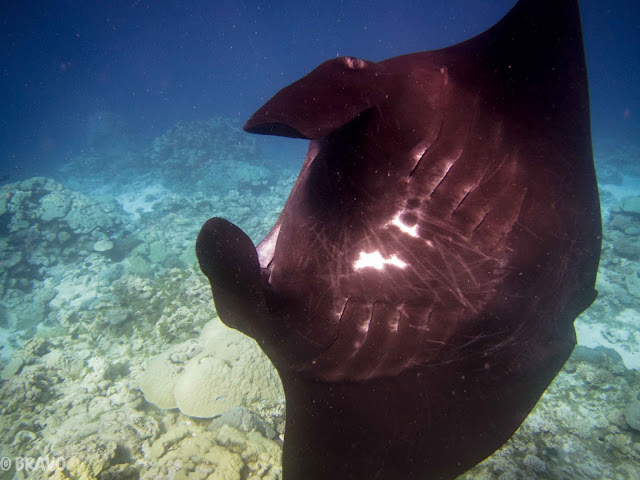 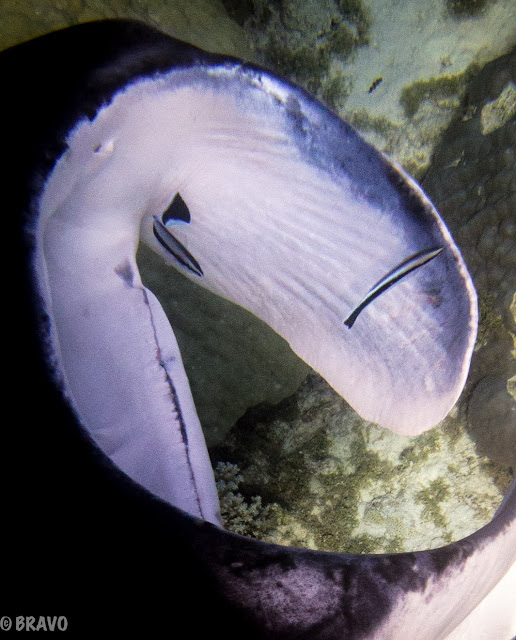 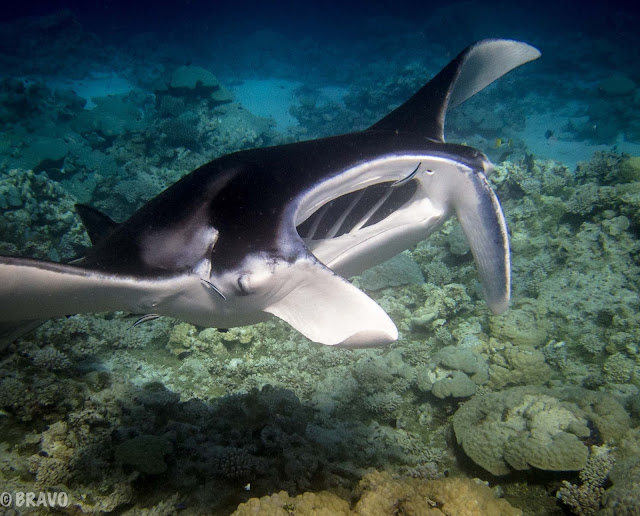 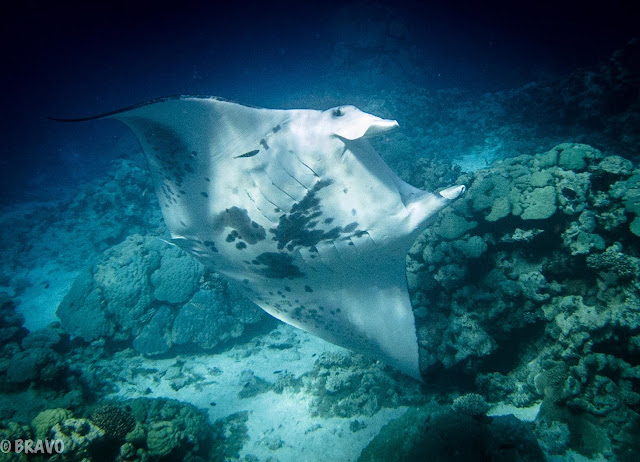 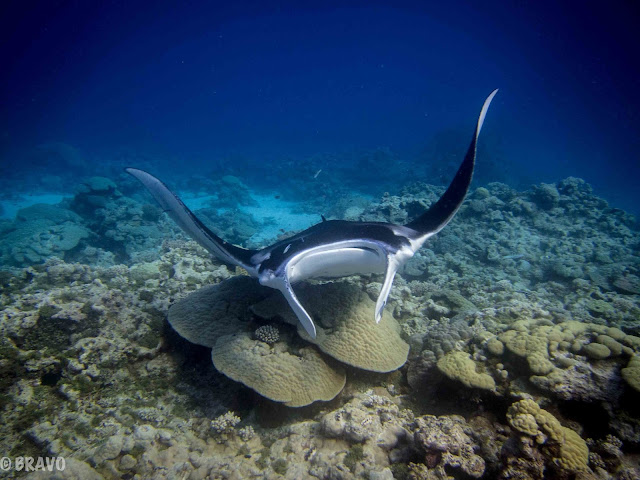 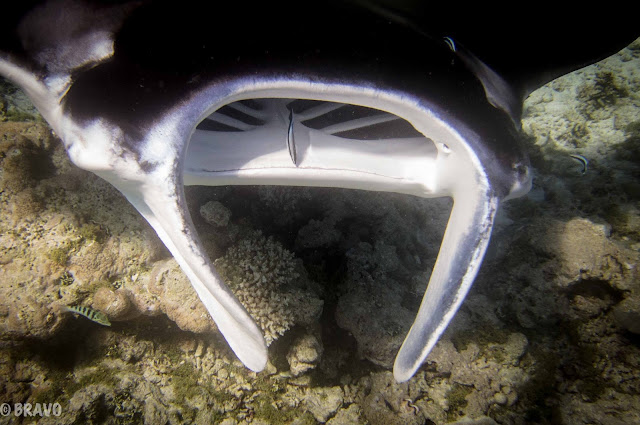 One day 6 of us from 3 boats ('Mystic Moon', 'Bella Vita', and 'Bravo') went out with Charlie for an all day tour of the atoll.  His sense of pride as he showed us his home was tremendous as we visited several of the motus surrounding the lagoon. 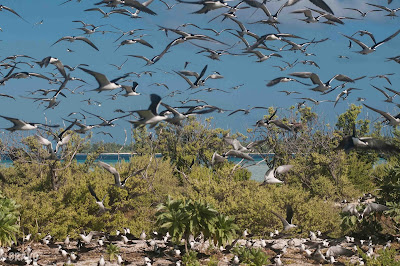 First stop was an island rookery for several species of sea birds, including frigate birds, sooty terns, boobies, and others.  We were able to walk amongst the parents incubating eggs, as well as the babies, some just a few hours old.  Truly amazing! 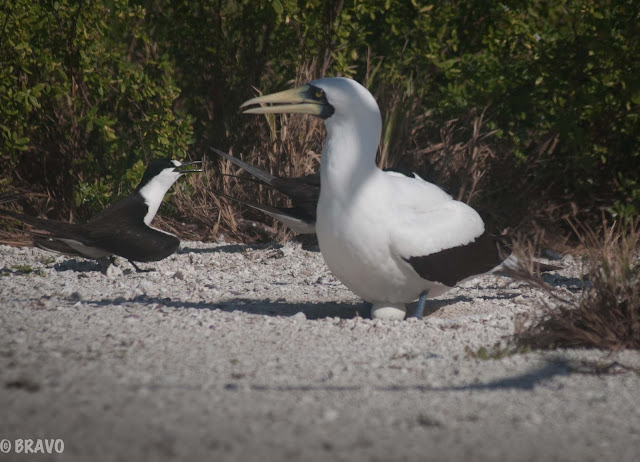 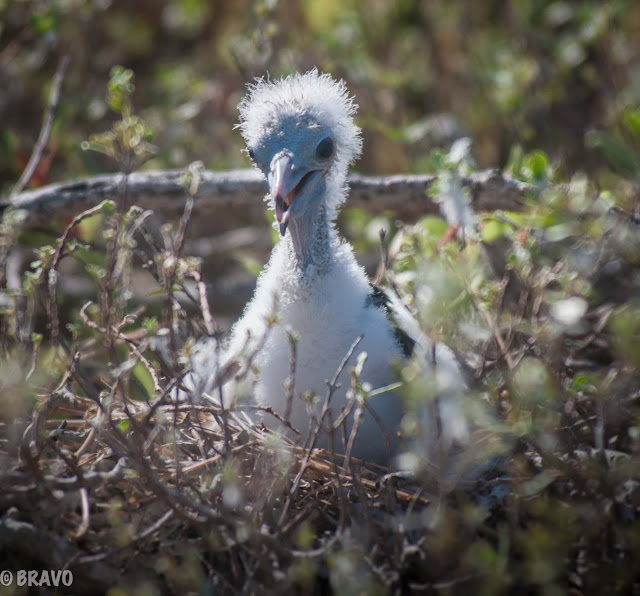 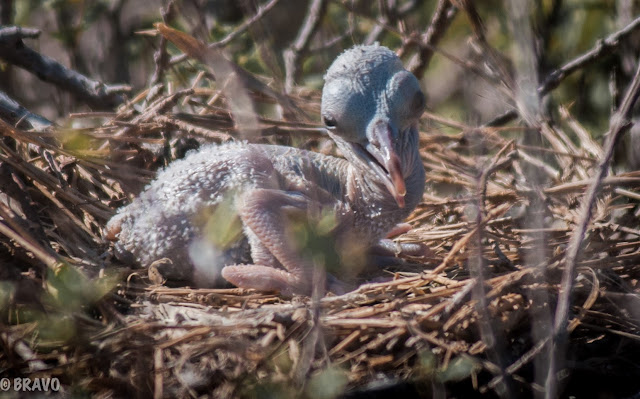 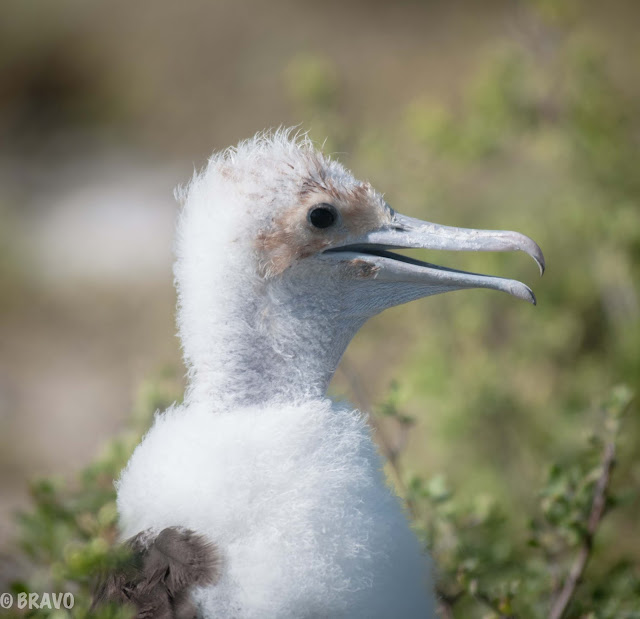 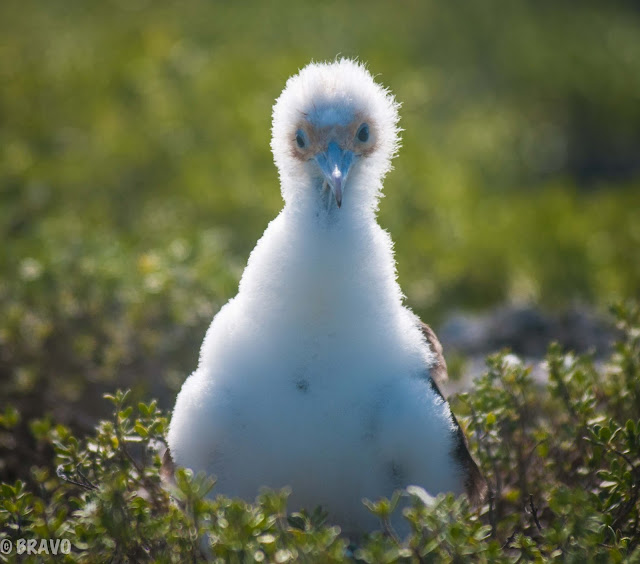 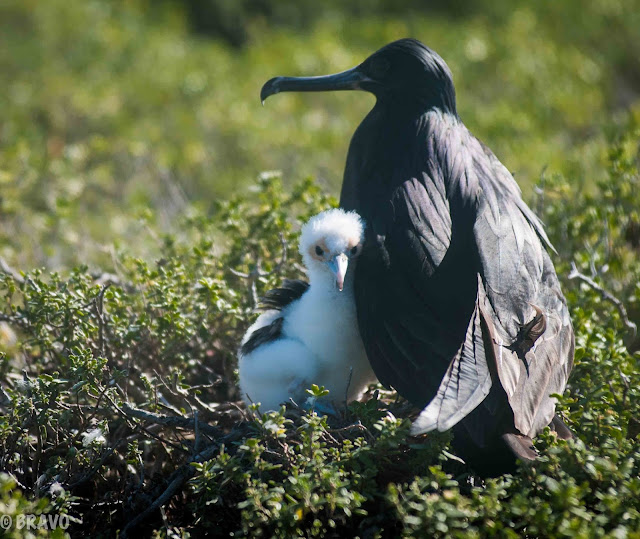 After an hour or so Charlie herded us up to head over to another motu in the 7 islands group.  Like all of them, the island was pristine, with little debris or trash washed up, and covered with coconut trees.  Charlie opened up lots of nuts to drink, before picking out a couple of coconut crabs for us to take home for dinner (the island was literally crawling with the tasty crustaceans!!!) 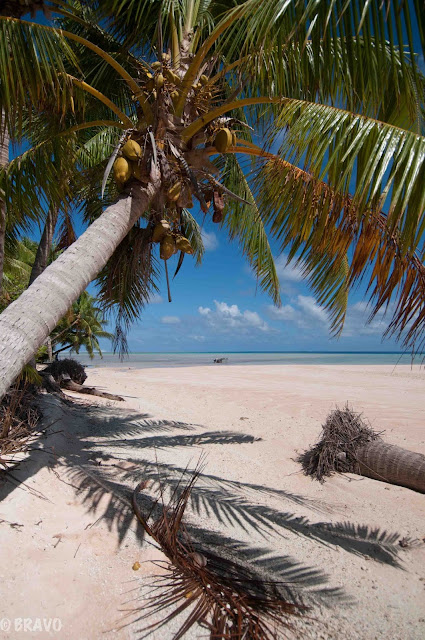 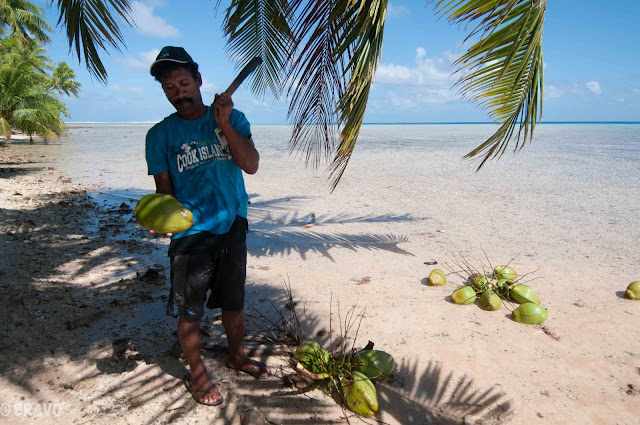 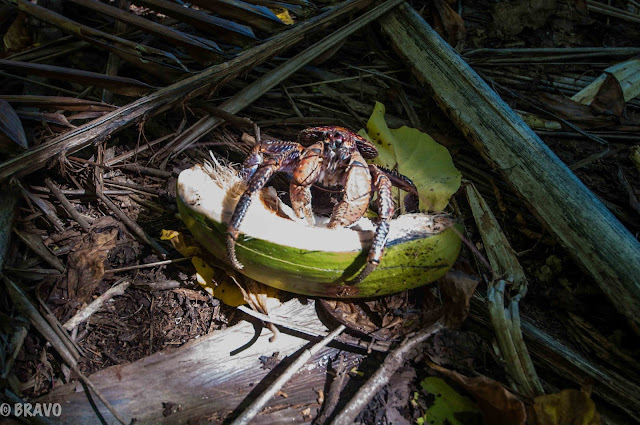 We wrapped up the day with a scuba dive.  Though we had eagerly anticipated diving in the gin clear water, the dive was actually the only disappointment of the day.  Not sure where the fish went, but the spot that we dove was virtually lifeless, and the coral not nearly as vibrant as our earlier snorkels in the lagoon.  Ah well, all in all, a truly spectacular day for all of us! 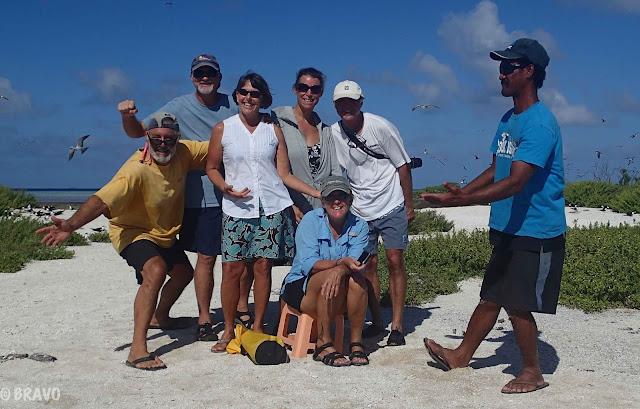 The beautiful beach of our anchorage island provided a fantastic venue for evening happy hours and potluck dinners, happily joined by the cruisers along with Harry and Charlie.  One of the traditions of the island is for the rangers to provide the fish for a bbq, and the cruisers provide the other dishes (and DRINKS!!!)  In speaking with Charlie the night before the bbq, Adam asked Charlie if he'd allow anyone to join him in catching the fish for the feast....."No worries", said Charlie with a big smile, if we'd supply the gas.  So the next morning at 5:30 Charlie picked up Adam and friend John off 'Mystic Moon' to head out trolling along the reef.  We fished for about 3 or 4 hours trolling Charlie's 2 handlines, before heading back in with 2 beautiful tuna and 2 barracuda.  Now, remember the bit about Suwarrow's shark population???  It's no joke.  As soon as a fish was hooked Charlie would "encourage" us with "fast....fast.....faster.....faster....." as the line was brought in hand over hand as quickly as possible, to beat the sharks to the catch.  Although it would take less than a minute to boat the fish, one tuna came aboard quite dead, with the top of it's head crunched off!!!  Amazing. 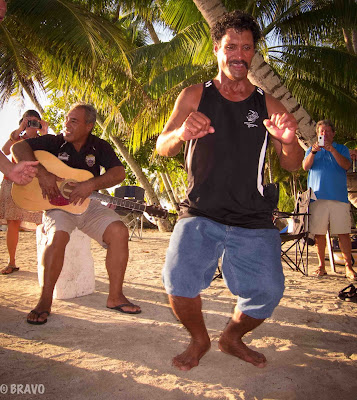 The evening get togethers were a blast.  Harry plays a very sweet guitar, and has a tremendous singing voice.  Charlie also sings, and is an accomplished Polynesian dancer as well.  We'd watch the gorgeous sunsets, and the parties would go late into the evening. 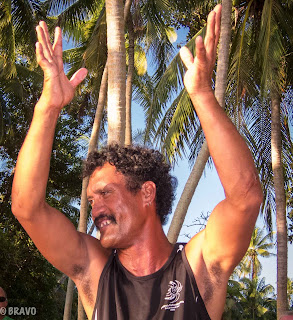 When it finally came time to weigh anchor and head out in a good weather window, the mood around the fire the night before was less upbeat than on previous nights.  Charlie was subdued, and for a long time Harry was no where to be seen.  We realized that our visit with these gentle, sharing hosts had touched us  deeply, and seemed to have touched Harry and Charlie as well.  Charlie was weeping as he announced again, "I love you people".  The feeling was mutual, as we got back in the dinghies misty eyed, aware that our special visit to this remote atoll would soon be ending.  When we sailed past the island the next morning, on our way to the island nation of Niue, Charlie was standing on shore, waving his arms over his head, wishing us a safe passage.  And that's No Boo-shit.....