After taking care of lots of boat chores, it was finally time to leave Bravo, safely tied up in her new temporary home in San Diego.  We flew back to Seattle Sunday night, for the next 2 months.  Cindi will finish up at work, and we'll get the house packed, moved, and ready to rent out.  Arghhhh....we're not looking forward to that!  Adam will also go down to San Diego in a month for a few days of work wiring and installing a new anchor windlass on the bow.

Then, in the first week of December, we'll head back down there and be off to Mexico.  Can't wait!!!

For both of us this shakedown cruise down the coast has been a great experience.  We learned a lot about Bravo, how she handles in heavy winds (and, more often, light!!!), and about ourselves, handling the boat and getting along in such tight quarters for a month.  Happy to report that it was a real success!!  It felt very strange to leave Bravo behind, as she has really begun to feel like a great home for us.  And we're eager to get on with the adventures that lie ahead.

So check back periodically over the next two months for the occasional post, and by all means, join us the first week of December as we get underway again!  In the meantime, here are a few last pix of the past few weeks...stay tuned for more to come!

Well, we finally arrived in San Diego yesterday.  Really culture shock coming into the Bay after weeks spent in relative peace and quiet.  Military presence everywhere, we felt were on the set of Top Gun, with fighters and choppers overhead, an aircraft carrier passing by outbound (with naval security keeping us at a distance), and huge ships all around the harbor.  Everything from jet skis to mega yachts buzzing all around.  Quite a scene, really!

We eventually made our way down the south Bay to our reserved marina, Pier 32 in National City.  It's several hundred $$ / month cheaper than the marinas in Shelter and Harbor Island, and since we're just going to be "storing" Bravo for a couple of months while we wrap up commitments in Seattle, we chose it based on cost.  But everything has a price.  The marina is brand new, and beautifully designed (by architects Miller/Hull in Seattle!!!).  But it's absolutely in the boonies.  When you ask "how do I walk to 'x'?", you either get a blank stare or a chuckle...you simply DON'T!  The place is surrounded by miles of industrial wasteland and freeways, but it's designed as an isolated oasis with a yacht club feel, with pool, lounge, etc.  We figured we'd rent a car, but none are available at the local places, so will take the tram and a bus to get into town.  Fuel is only available back at Harbor Island, nearly 1 hour back up the Bay!  Want to change the oil...none available here, need to drive to get it!  Oh well, will just be a couple of months here, then off to Mexico.

The last few days have been great.  While in Emerald Cove, we did go for a hike...on the hottest day ever recorded in LA history!  113 degrees, broke the thermometer at LAX!!!  Must've been 100 on Catalina.  We went for what we thought would be a scenic 5 mile walkabout, and it turned into a Batan death march...well, ok, that's a bit of an exageration, but carrying little water, it was a scorcher.

Next headed to Avalon.  We picked up a mooring there, and looked up to see friends from our marina in Seattle moored a couple of boats away.  Bill and Kat from KP44 Island Bound came over for dinner.  They're also on they're way south, and we had a good time comparing notes.

Leaving Avalon the next day, we headed across to Newport Beach.  Rather amazing place, with thousands of boats of all shapes and sizes on moorings, at anchor, and at slips behind folks houses, both in the main channel or in side canals.  Very cool, the entire town seems focused on boating in one way or another. 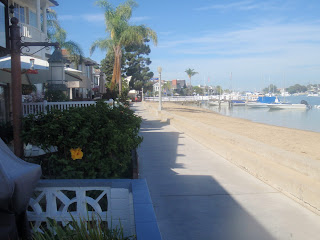 We picked up a mooring there ($5/night...nice!), and Cindi's brother Tom, his wife Alicia and son Ian visited us for dinner.  Really nice time had by all, and nice to share the Bravo experience with family. 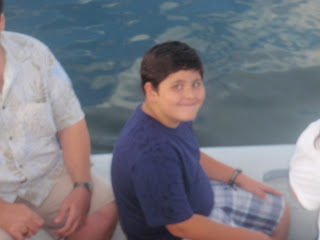 One new experience at our Newport mooring was "clicking shrimp", shrimp making clicking noises through the night.  We've since been hearing the noises at all other spots we've anchored or moored.  And speaking of anchoring...we've finally had to admit that our existing windlass, the winch which hauls up our anchor, is not up to the job.  The new anchor we added in Seattle weighs 30# more than the old, and when we anchor in 70' of water, it the windlass is nearly "brought to it's knees", struggling to lift that much chain and the larger anchor.  It's not possible to get a stronger motor for it, so we'll need to replace it while here in San Diego.  A big ticket item to be sure, but better to get it done now, than to find us in a remote spot unable to raise the anchor.

From Newport we headed to Oceanside for a night, and then yesterday to San Diego, where we'll spend the next couple of days doing boat chores...after we find a car!!!  Between Oceanside and SD we were visited by a pod of hundreds of dolphins.  They were all around us, and groups of 10-20 took turns playing in our bow wave.  Very cool, the biggest visit by dolphins we've ever had, and they stayed with us for perhaps 45 minutes.