Back aboard in La Paz after whirlwind US visit

Well, we're sort of back to where we left off when we last posted.  That is, we're still in La Paz, actually still at the same marina, Palmira, that Bravo's called home since November 10.  But there's been no moss growing on our north sides, and as of this week, there are no barnacles growing on Bravo's bottom either.

We left Bravo in her slip while we headed up to the U.S. for a couple of weeks of visiting with family and friends.  La Paz/LAX/Wash DC/Harrisburg, PA/Wash DC/Seattle/LAX and finally, La Paz again.  It was a hectic but fun trip, as we jammed in lots of visiting, eating, shopping, doctors, dentists, drinking, and oh yeah, did we mention "eating"???   Great to see folks, and sorry to those we missed...we'll be back in a few months, hope to do better on scheduling!

While in Harrisburg visiting with Adam's sister and her family, and his dad Lou, we spent a day joining  Lou at the senior center that he goes to a few times weekly.  While there, it was time for aerobics class.....led by a 92 year aerobics instructor!!!!!  She was terrific.  Yes, both Adam and Cindi were able to keep up, but admit to breaking a sweat!!!!!

Thanksgiving was spent up in Anacortes at the Hawkens place.  Had a great time, and even took out the "Golden Troll" for some dungeness crabs the day after the holiday.  Tasty business!!!

All in all, it was a great visit back to the states, marking our 1 year anniversary of cruising in Mexico.  It was really wonderful to see so many old friends, but it really felt great to finally arrive back aboard Bravo.  She was safe and sound as we left her.


But then the projects began...here are a few of the things we've been up to since we got back about 10 days ago:

*Watermaker rebuild:  Took entire beast apart to install new manifolds and membranes, as the water quality was getting up to about 800 ppm.  They say that membranes should last around 5 years, and as we've owned Bravo for 10 without replacement (and don't know how old they were then), it seemed like they didn't owe us much!!!  The project took about 3 full days, as the thing is a monster...motor/pump assembly alone weighs approx 100 pounds.   It's an aging relic of a watermaker, and some parts are getting pretty long in the tooth.  But it finally went back together, and with the new membranes we're now making extremely pure water, with a total salinity content of just 125 ppm.  (most sources say that a person can't even taste salt in water until approx 1000 ppm).

*Upholstery:  Cindi has been busy sewing new covers for all of the cushions in the main salon...Bravo is looking SHARP!!! 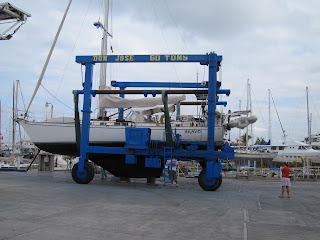 *Haul out:  We hauled Bravo out of the water for bottom paint.  Just splashed back in this morning.....went very well.  Palmar yard had a modern 60 ton travel lift, and their great crew was really careful with our home.

*Varnishing...5 coats needed, as the summer in the Sea of Cortez really took it's toll

*Fix a multitude of plumbing challenges...the Mayor of Bravo has really been having issues with the Water Department lately....ahhhhhh.....leaky toilet pumps, plugged sinks, and watermaker pre filter leaks.......


But as all of that continues, we've really been enjoying La Paz.  It's a great town to explore, and though the weather has been chilly (low 60's at night.....brrrrrr.......), it makes it easy to get things done.  Here are a few photos taken as the city starts to ramp up for Christmas..... 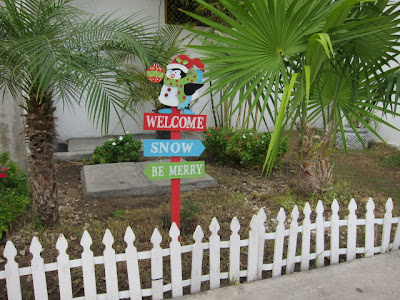 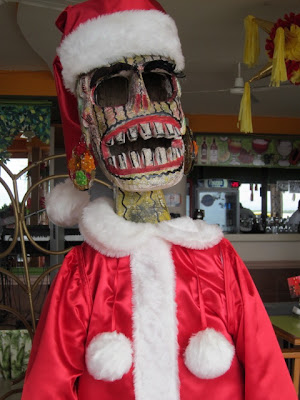 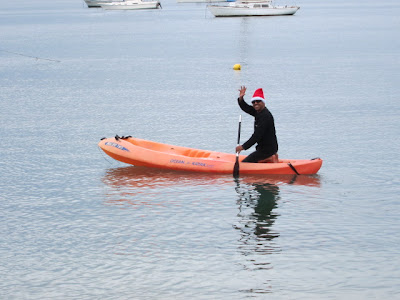 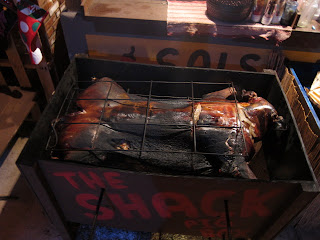 Went to a great carnivore's delight the other night...a pig roast at a local bbq joint, The Shack.  The guys cook a mean pig!!!  And while devouring a chunk of beast, I looked up at the wall (where folks can sign w/ a Sharpie), I saw names of old sailing friends CB and Tawn from Seattle!!!  We've just learned that they were visiting here last month (without their boat) while we were in the states.....Small world indeed!!! 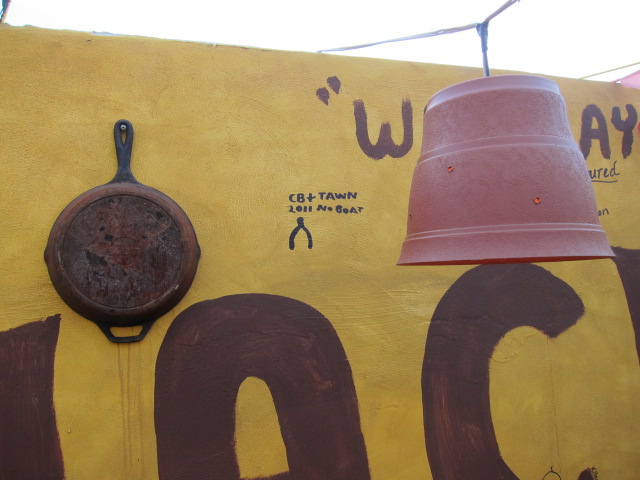 As the pig said, that's it for now...we'll be in La Paz through new years, when we'll start to work our way south.....cheers!