We left Chamela a few days ago, to continue our journey south down the Mexican Riviera.  Decided to stop in a beautiful bay, known as Paraiso in the cruising guidebooks.  Looked very wild, with little development anywhere nearby, except for a beautiful private resort/villa on the beach.

Wild it was, with the bay being a tiny box, with enormous swell waves crashing on the surrounding rocky cliffs and beach.  Very cool spot, though the tight quarters, coupled with the shallow depth was worrysome.  Bravo draws nearly 7 feet, and the depth at on our depthsounder showed 9.5.  Now, granted that was at what appeared to be low tide,  but the tidal range in these waters is little over 3 feet, and this didn't leave much of a cushion.  The water was clear, and we dove all around us, checking our anchor set on the bottom and checking for rocks.

Finding none, we decided to spend the night in this unique location.   Didn't have a very restful night, to put it mildly.  Left all instruments on, in case we needed to make a hasty retreat during the night.  But the wind remained calm, as expected, and we enjoyed exploring this unique area by kayak in the morning before leaving for Tenicatita Bay. 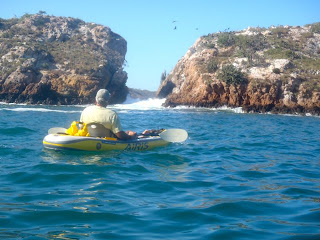 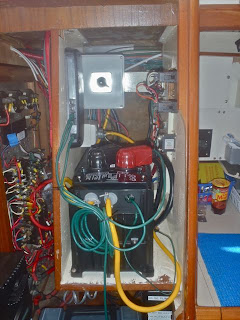 It's been a beautiful past week or so.  Friends Glen and Carol came down from Seattle, where we met them at the Puerto Vallarta airport for the bus ride back to the boat at La Cruz.  And miracle of miracles, they had an enormous box with them....our new inverter/charger!!!  The update:  we couldn't fix the old one, so we bought a new one in Seattle.  Needed that "TIP" mentioned in the last post for G&C to get it through Mexican customs without paying the 35% duty.  Well, the TIP arrived the day prior to their departure.  It was scanned and emailed to them, where they printed it, and had it ready for customs when they arrived.  It was necessary, and it did the trick!!!  The customs guys didn't know what it all meant, but it looked really pretty and all official with lots of stamps!!!  Official looking stamps seem to be the key around here.   Bingo, a new widget is now in country, and we installed it the next day, no fuss, no muss!!!

Spent a few more days in La Cruz with G&C, finishing projects, exploring, and provisioning for the next couple of weeks.  Went out to Punta de Mita for a couple of days of swimming and kayaking.  Glen and Cindi went kayak surfing while Adam and Carol focused on being the hunter gatherers...surfing proved more fruitful than fishing!!!

Then off to explore Islas de Tres Marietas.  Beautiful, wild islands at the mouth of Banderas Bay.  Much wildlife on and around these nature sanctuaries, both bird and marine critters abounded.  Saw many whales (humpbacks), and enjoyed snorkeling in the still rather chilly waters.  After a couple of days here, it was time to head south.  We did a night passage, leaving Tres Marietas at around 7pm, in order to round Cabo Corrientes (famous for challenging wind/sea combinations when the breeze is up) after the afternoon land breeze died down, and reach Chamela, approx 90 miles south, in daylight.  The night sailing was great, with fairly steady breezes after rounding the Cape of around 15 to 20 knots most of the night.  Arrived tired but happy in Chamela Bay at around 1pm.  All enjoyed a brief siesta!!!

Chamela has been a great spot to explore.  The water has warmed up nicely from the chilly 67 in Banderas Bay, now averaging 74 degrees.  We've been snorkeling every day, and kayaking among the nearby reefs.  Adam went scuba diving with friends Mark from Southern Cross, and Chris from Rocket Science.  Chris has a dive compressor, and with the Southern Cross gang they've been hitting the diving with gusto!!!

The beach hiking is great here.  Passed an estuary with many signs warning of crocodiles.  We saw one big guy, but he was a safe distance away.

The snorkeling has been good, though visibility has been only so so, perhaps 10-15 feet max.  Still it's nice to be in the warmer water, with thin shorty wetsuits.  For scuba diving, though, we've been wearing 7 mil wetsuits   ;-[   (that's what we wear in Puget Sound!!!!!) 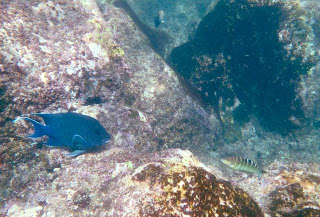 Glen and Carol left today, heading back to the soggy Northwest.  We'll be heading south in the days ahead, checking in to Tenicatita, Barra de Navidad, and points in and around there.  Not sure how far south we'll go before heading back north into the Sea of Cortez for spring and summer.  Perhaps down to Zihuatanejo, perhaps not.....These are the tough decisions we agonize over these days!!!  We love it!!!

Hola!  Sorry we've been somewhat delinquent in our blog posts...the old saying, "I get up in the morning with nothing to do, and when I go to sleep, I'm only half done" has certainly applied to us!  We've been busy, but "busy" down here has a rather different meaning than up north.  Sure, we've been working on various projects on "The List" nearly every day, but the work is at a rather leisurely pace, compared to working in our previous lives.

We've been anchored out at La Cruz for the past 8-10 days.  The town is small, but has what we need in terms of tiendas for groceries, tortillas, wonderful fresh fish, and access to services for repairs to several "List" items.  We've now had our genoa repaired by the local sailmaker (now working on a minor recut of the foot of our mainsail, necessitated by the addition of the bimini cockpit covering in Seattle before we left.  We had hoped the recut wouldn't be necessary, but it really is, and this will help us greatly when we need to head back upwind).  We've also found a skilled canvas worker in town who is making dinghy chaps for our inflatable dinghy.  The "chaps" are a cover for the tubes which protect it from the tropical sun, a necessity to extend it's life in these parts.  We were also able to get our boom outhaul car welded by a local welder who did beautiful job w/ TIG setup, now stronger than original, it's good to go.
One bummer has been the inverter/charger, that we mentioned in the previous post.  After installing the new circuit boards, it remains kaput, and we've decided to order a new one from the states.  We're getting around 125 amp hours daily from our solar panels, which is just barely enough to keep our batteries charged, marginal if we want to have a freezer full o' fish (and the all important ice in our sundowners!!!)  Unfortunately, importing parts, especially expensive ones, isn't easy...anyone ever heard of a treaty called NAFTA?  Apparently it's not all it was chalked up to be, as we need to pay 35% duty on imports.  The loophole is if you document that you're a "Yacht in Transit" by obtaining a "TIP", or Temporary Import Permit.  This permit has proven to be rather elusive in Puerto Vallarta, and we've now hired an agent to expedite the process, in order that we can get friends Glen and Carol to bring the rascal down with them when they come to visit next week.  Many fish tacos are at stake here, given the price of the new part, so our fingers are crossed that our TIP arrives soon!!!  (yes, the chances look slim!!!!)

We've really been enjoying getting to know the area better, taking buses everywhere we need to travel.  It's always an adventure, but we have about an 80% success rate that we'll get on the right bus...not too bad!  And when it's not right, well, you get to see yet a new place!!! 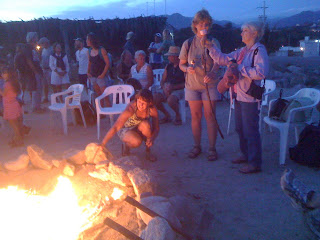 We've been enjoying seeing both old friends and new here in La Cruz.  Long time amigos Mark and Vicki arrived with their boat Southern Cross for a few days, and are now heading south again.  This anchorage and marina is a great gathering place for cruisers, with an outdoor movie every Thursday night (Master and Commander and Captain Ron so far), potlucks on the beach, swap meets, bocce tournaments, etc.  Laundry has been interesting, as it's the same price or cheaper to have someone wash, dry and fold your clothes than to put the coins in the machines and do it ourselves...a bit of a no brainer, eh??  Been kayaking most days with our inflatable 'yaks.  One favorite trip is a 40 minute paddle to Bucerias, a nearby town, for breakfast on the beach.

We'll be here in Banderas Bay for a few more days, exploring Yalapa tomorrow, before Glen and Carol arrive next week.  The plan will then be to head south with them to Chamela, Tenacatita, and Barra de Navidad.  The water should be warmer down there (area is known as the Mexican Riviera!), and we look forward to more swimming, snorkeling and fishing as we work our way south.
Posted by Adam at 8:10 AM 4 comments: