Wow, the first blog post in over 2 months!  Sorry bout that, we've been busy, with a quick 3 week visit to Seattle and settling back into life in New Zealand, which will once again be home for about 6 months.  (For those who didn't catch it on Facebook, see the end of this post for some pix from our Christmas in Whangarei)

We've been cruising here on Great Barrier Island, about 40 miles off the main NZ coast for nearly 2 weeks, and it truly does live up to it's name and reputation.  What a GREAT place it is!!!  Reminds us of our old stomping grounds in the North American Pacific NW, Washington's San Juan Islands and British Columbia's Gulf Islands.  Lots of beautiful coves and sweet little bays to explore, well protected from the ocean swells.  Lush and green ashore, as the heavily logged kauri forests are starting to rejuvenate, especially on the northern half of the 27 mile long island.  The island is home to less than 1000 folks, and offers a laid back lifestyle changed little over the past century or so.  Lots of birdlife here, including several species unique to the island and/or New Zealand.

We sailed here (mostly motored, actually, in very light summer air) from Whangarei, not really knowing what to expect in what the locals call "silly season", these summer weeks starting before Christmas and running well into January.  This is the time of year when seemingly every Kiwi with a boat, of ANY type, size, or condition, wants to be out on the water.  Kind of like the USA's July 4th and Labor Day weekends lasting for 6 weeks!!!  And in New Zealand, with the most boat owners per capita in the world, this means that, well, let's just say you can't expect to get anchorages to yourself!

We haven't found the crowds to be as bad as feared, though some anchorages can get a bit snug at times.  We have actually had a couple of nights to ourselves in little bays.  It's also been funny to be the only foreign boat in anchorages with 50 or more Kiwi boats, much different than the past 4-1/2 years, when we are typically amongst international cruisers from all over the world.  It means that many of these boats are relatively inexperienced, getting out on the water for just a couple of outings each year, much like in the USA.  We had a boat anchor upwind of us yesterday.  When we told him that he was dragging anchor in the freshening breeze and getting closer to us, he just shortened up his anchor rode to go back to the original distance!!!!  "No worries, she'll be right mate"!!!  Sweet as!!!

GBI, or "the Barrier" as it's known by locals, is a terrific place for hiking, with many miles of well maintained DOC (Department of Conservation) trails criss crossing the main island, as well as the outlying smaller islands around GBI.

We anchored for about a week in an unnamed little bay on the east side of Kaikura Island.  The island is now in a public trust, with no one living ashore except the caretaker family.  Good friends Graham and Diane on s/v Maunie sailed over and we had a good time exploring the island together.  One hike took us to the high point of the island, a terrific observation point.  Had a great encounter with a morepork, one of only two types of owls found in NZ. 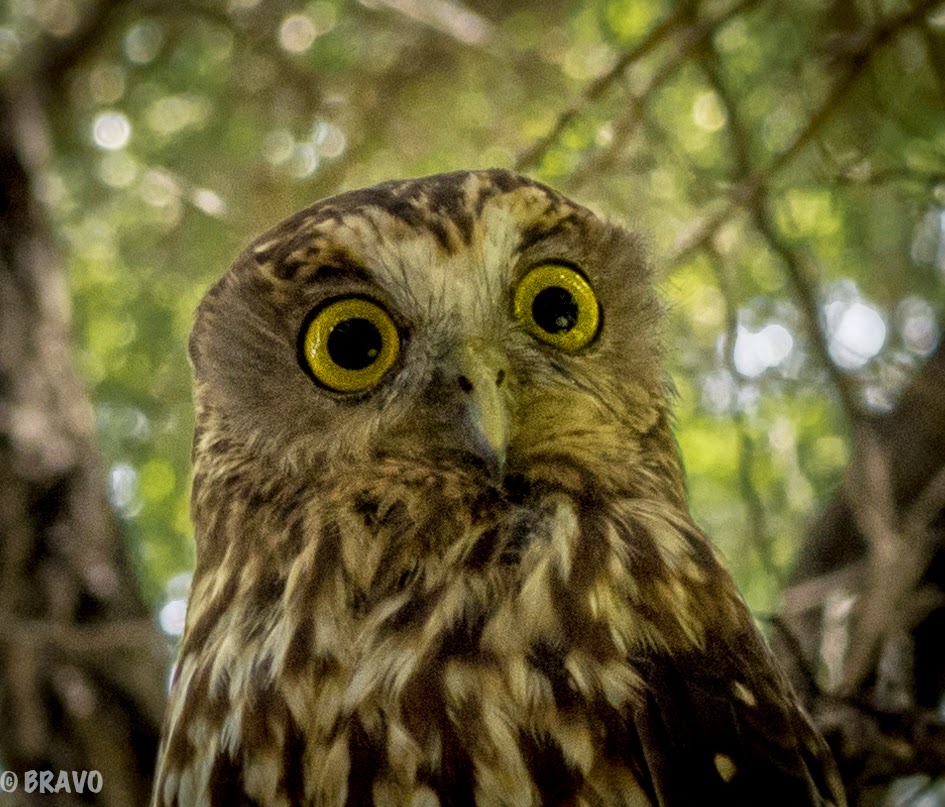 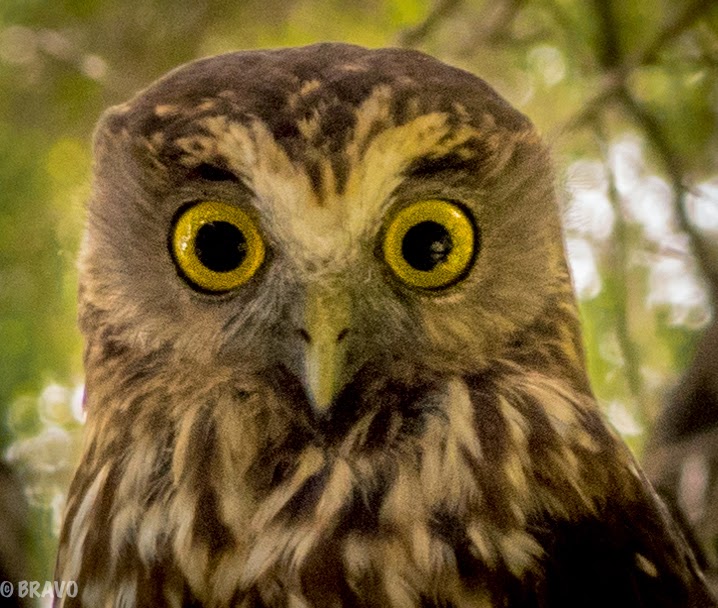 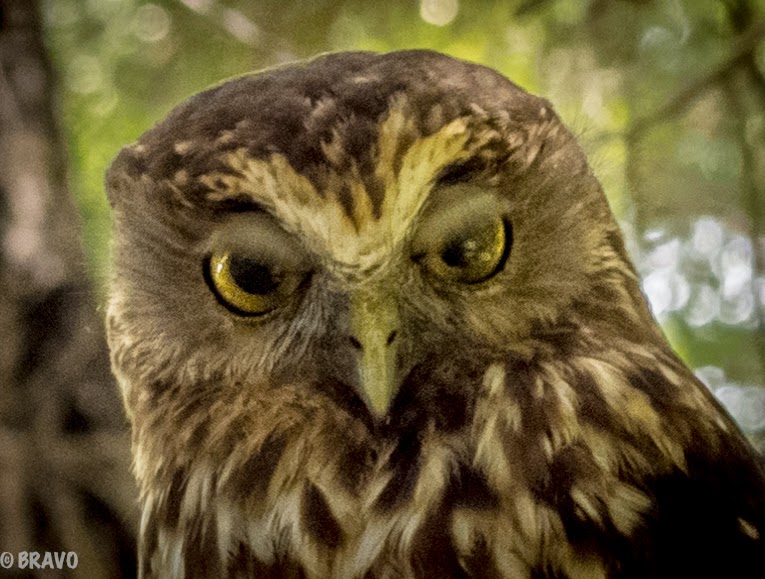 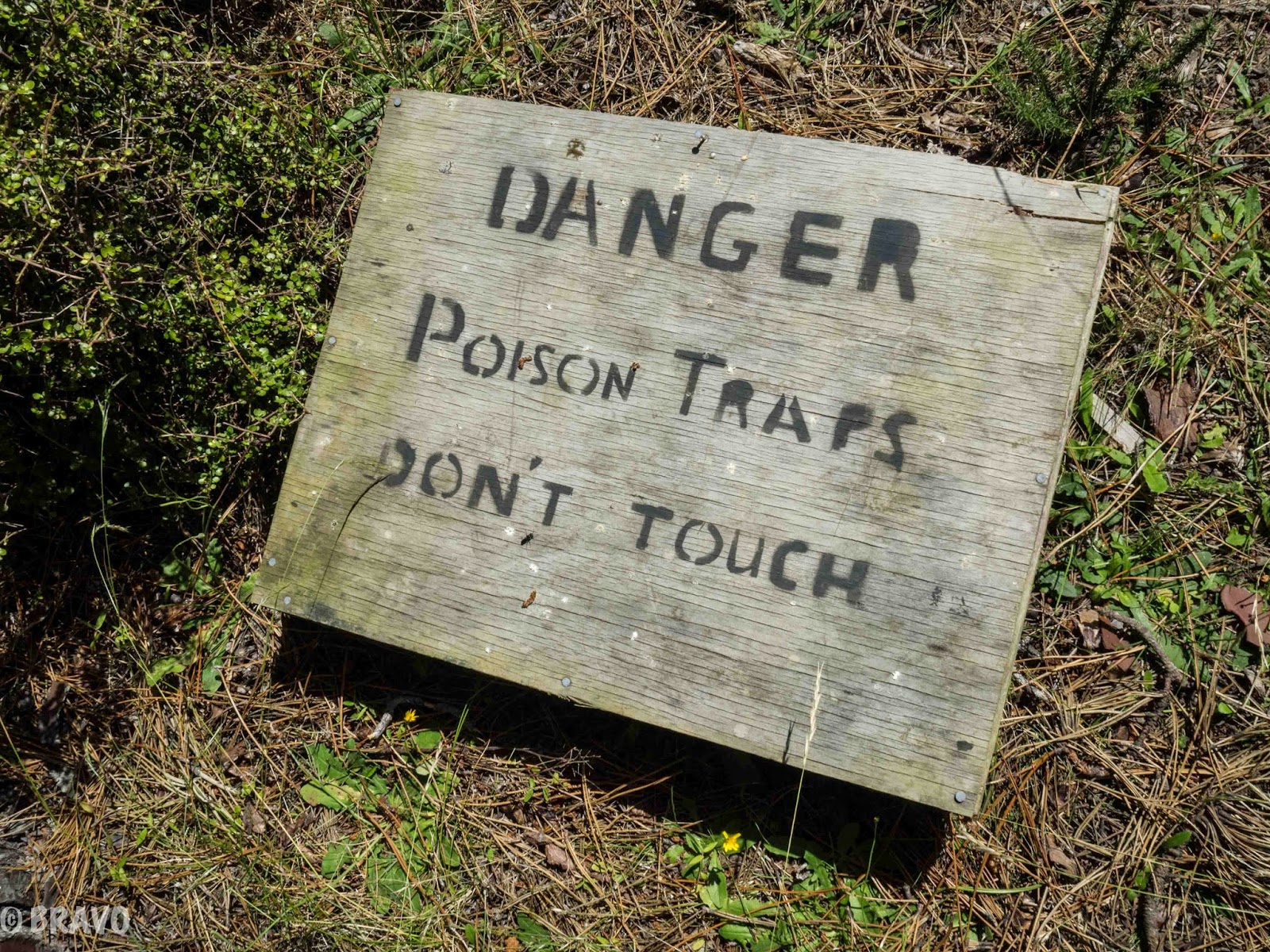 Kiwis take bio security seriously.  Rat poison stations were about every 100 ft along the trails, as they try hard to keep the bird egg eating rats, possums, and stoats out. No native mammals in New Zealand except bats, so if it's walking around on four legs, it's fair game around here!!! 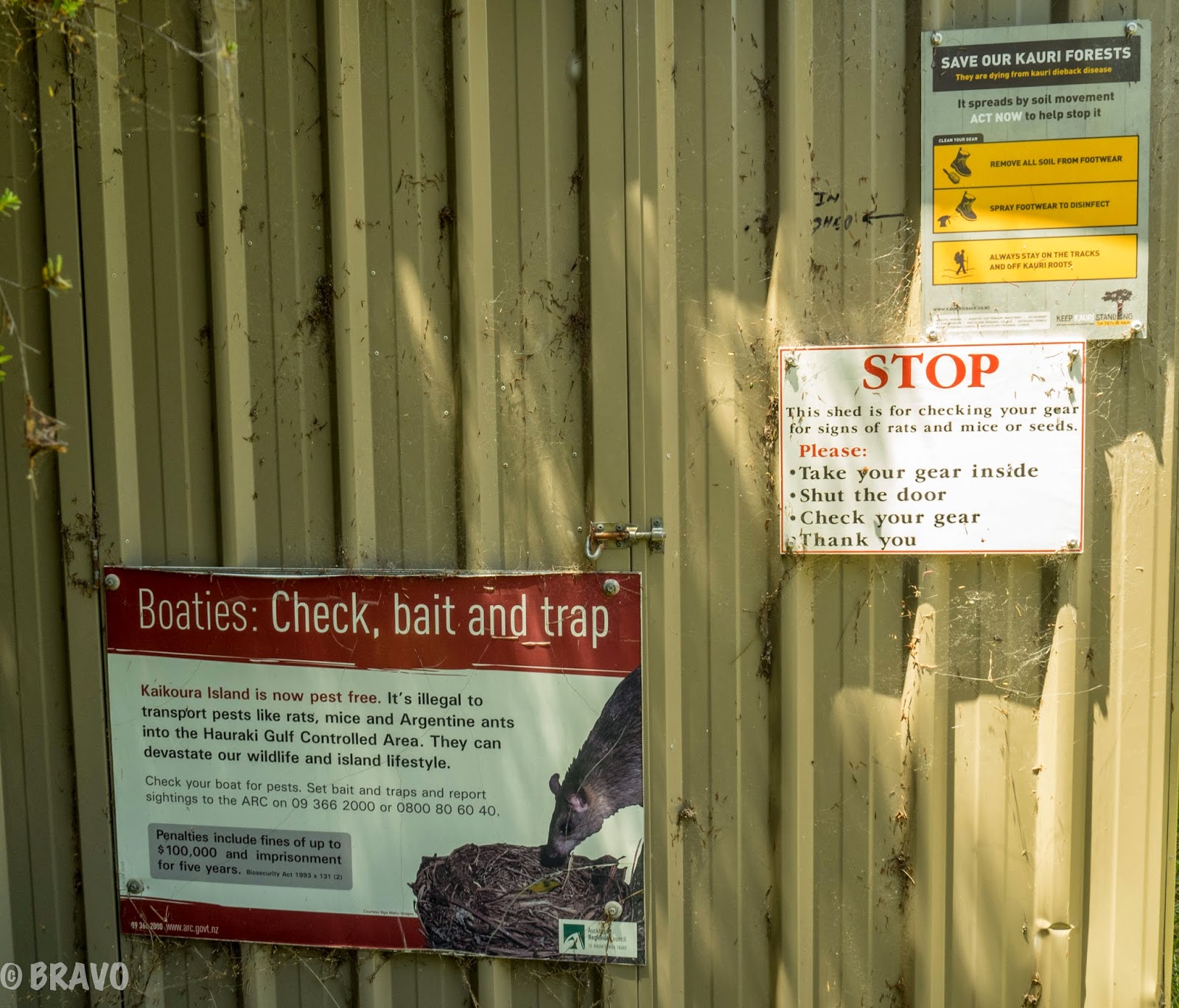 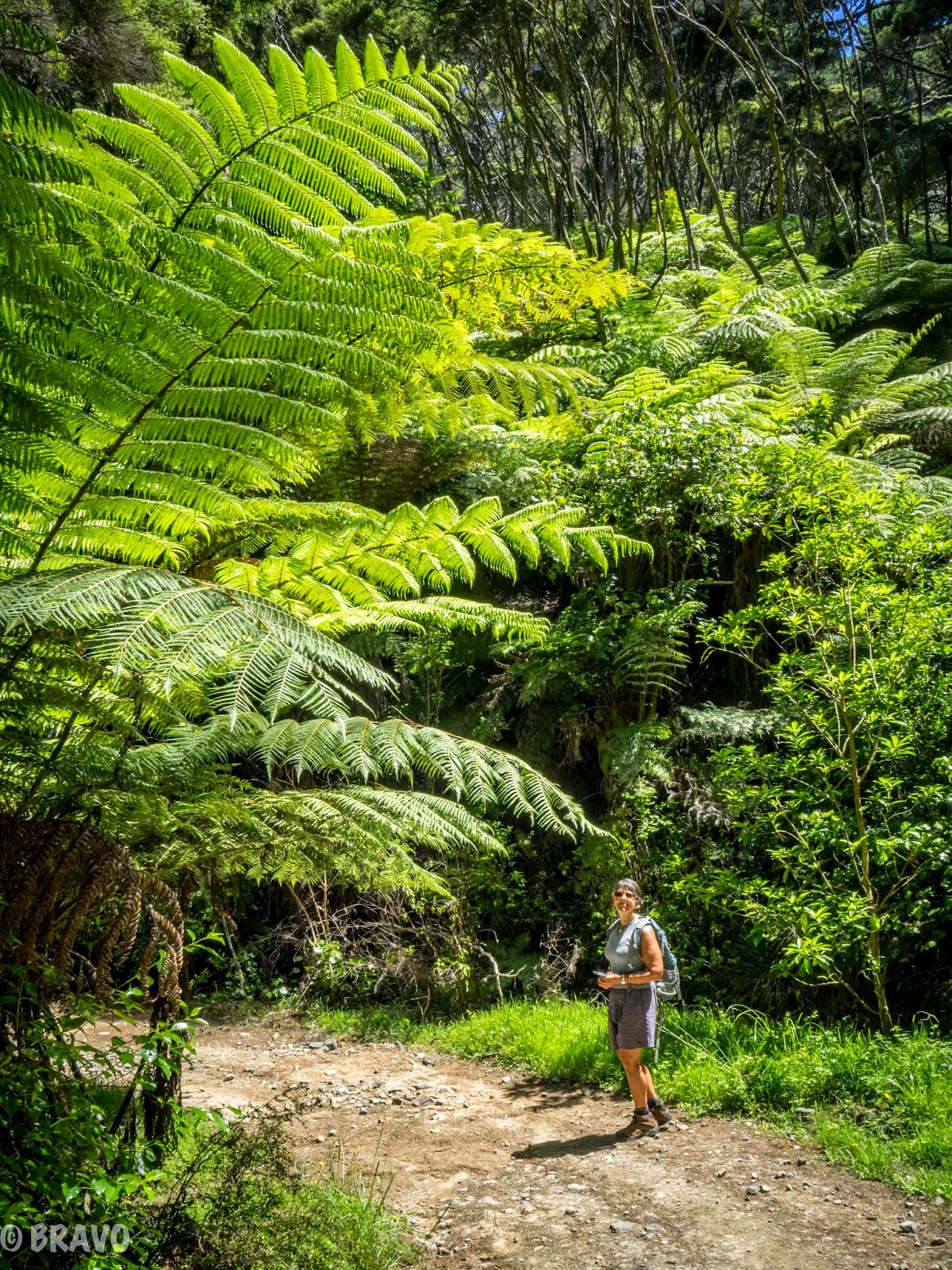 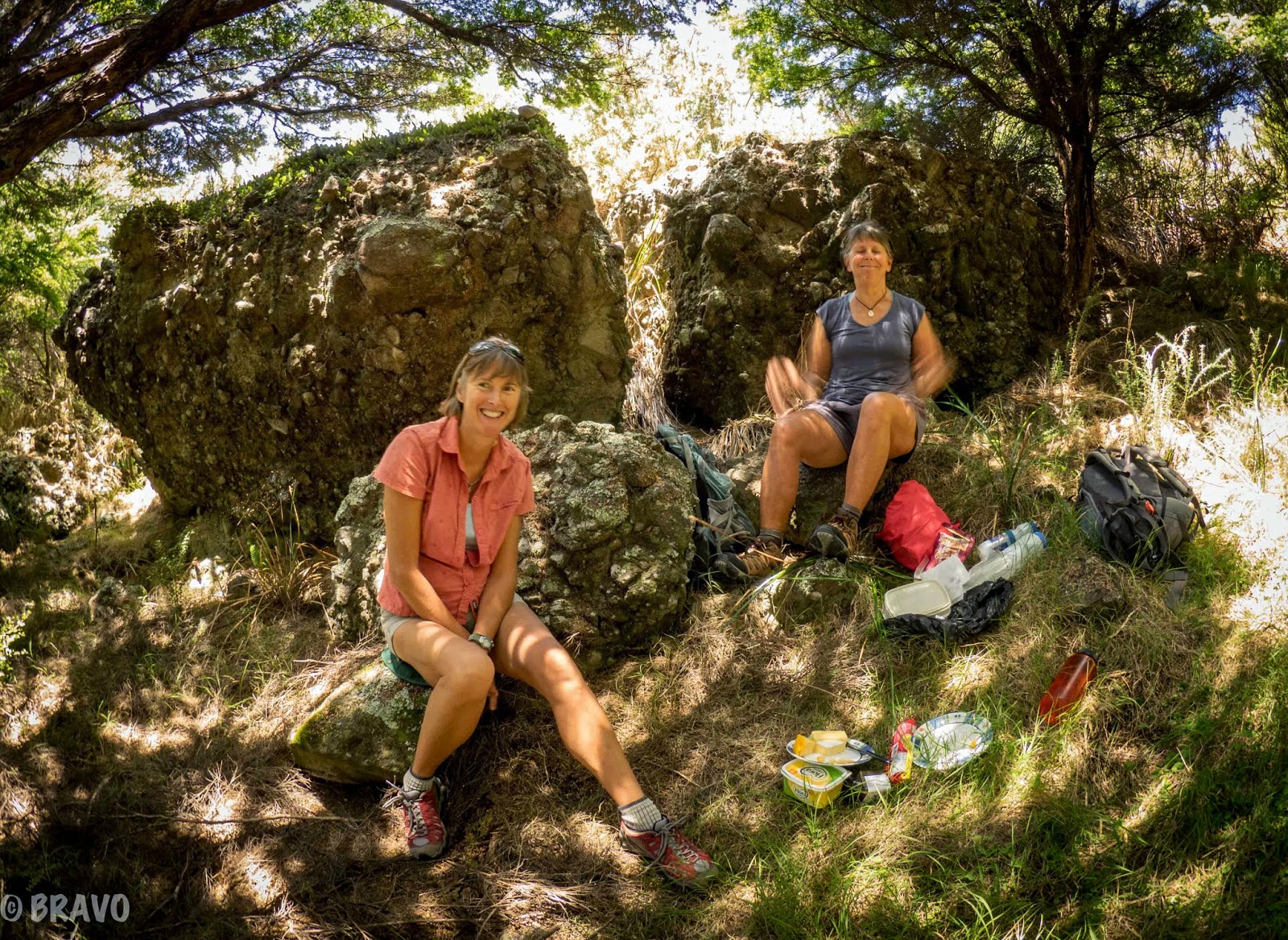 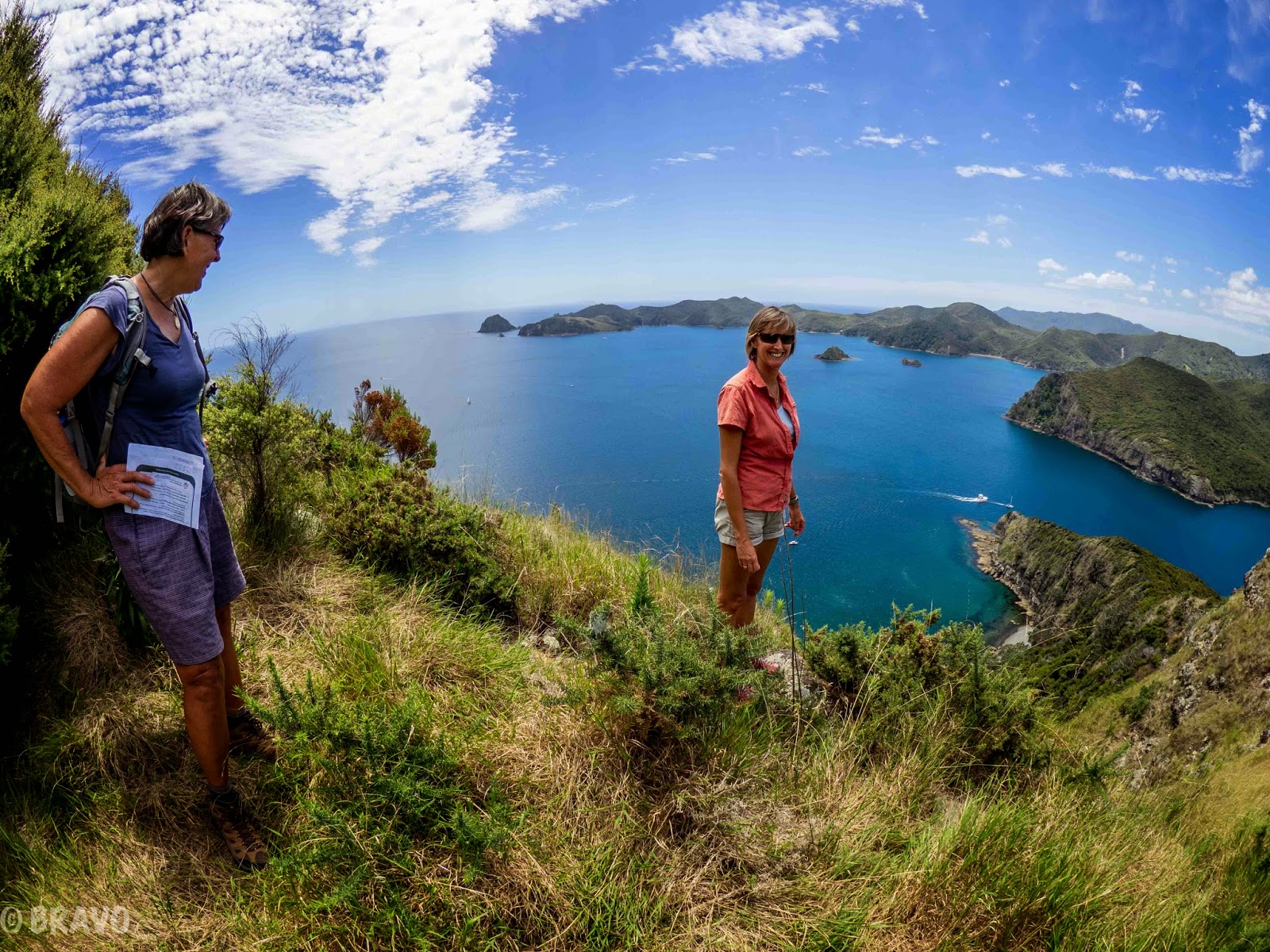 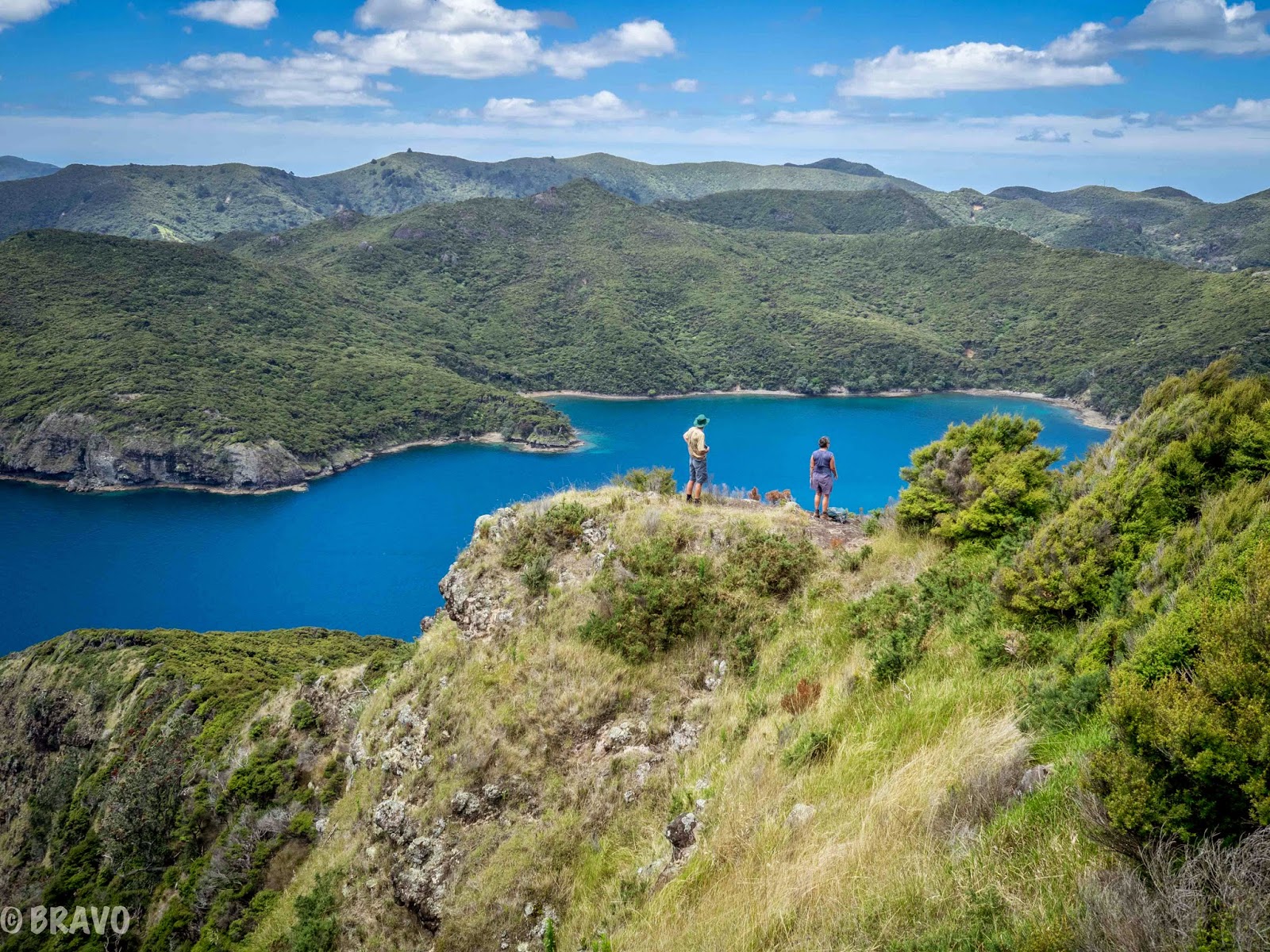 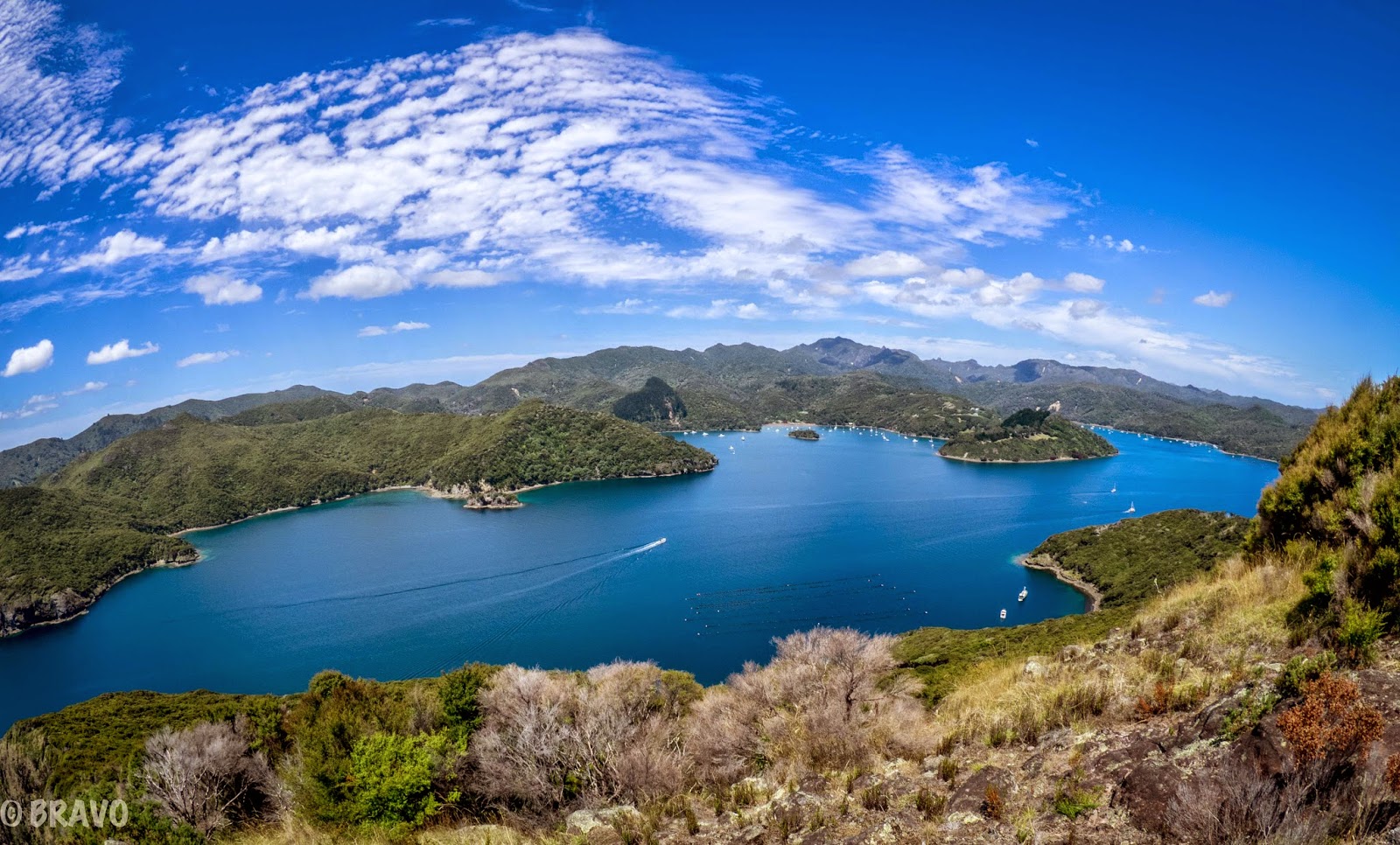 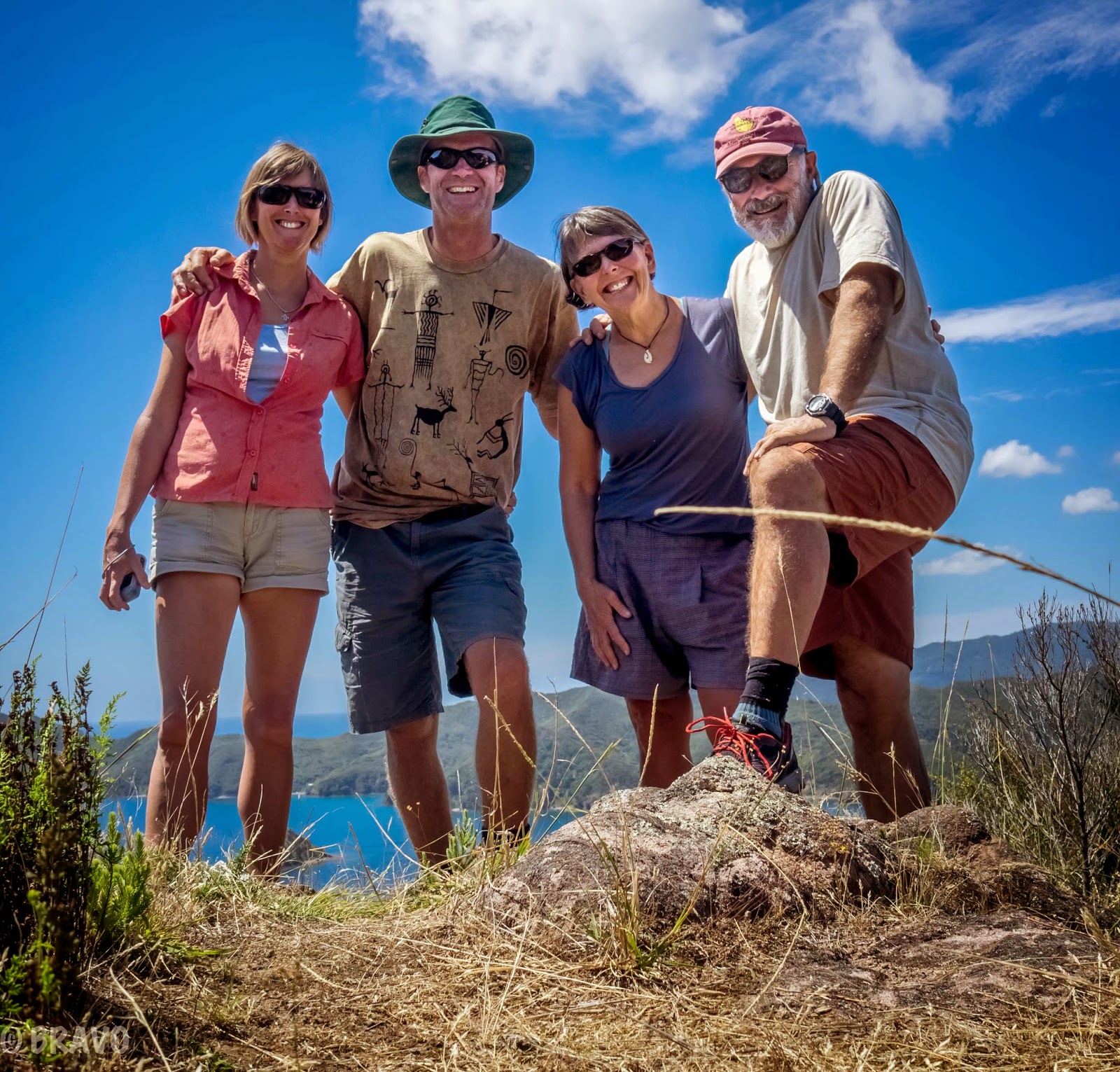 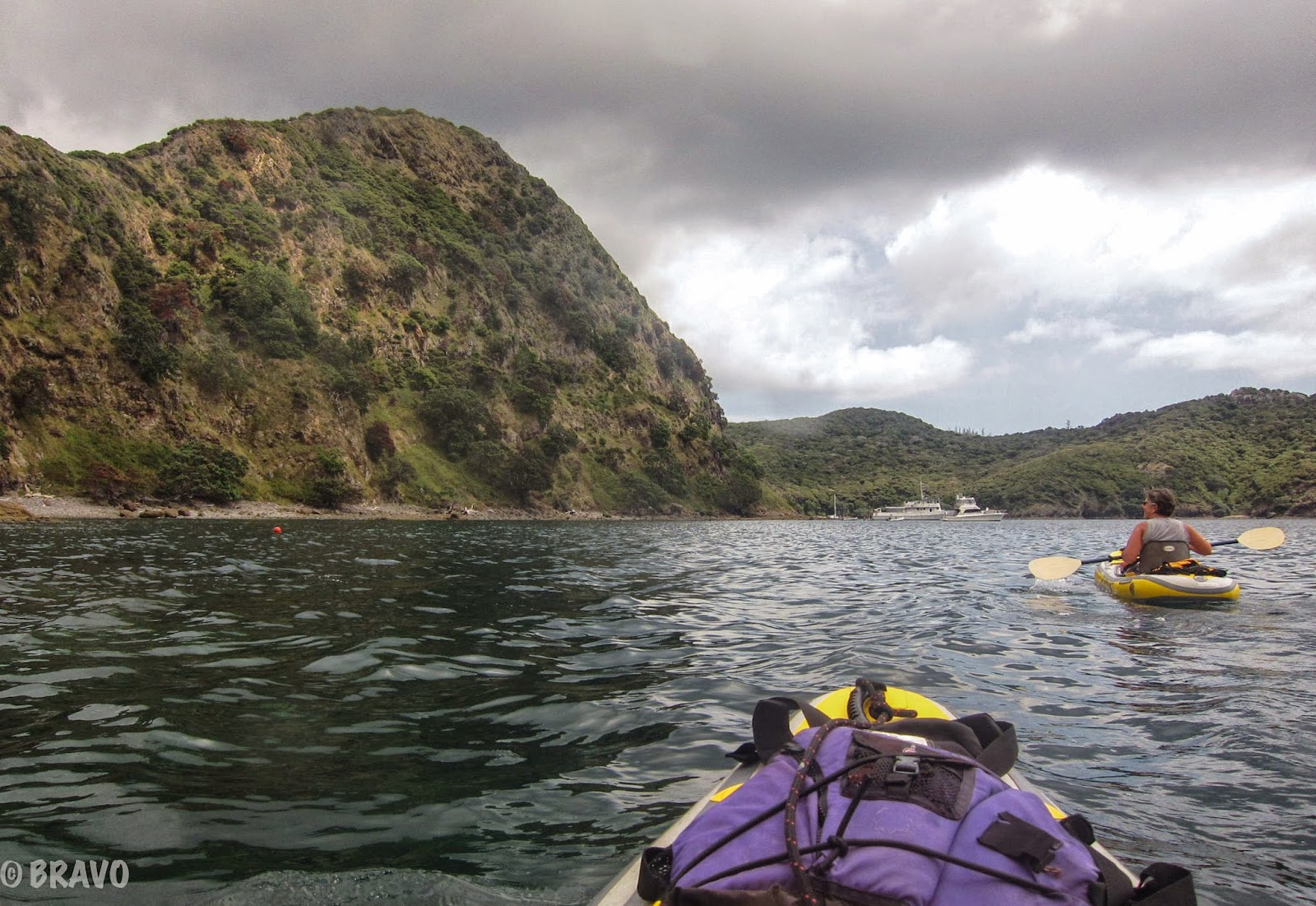 One day we took our inflatable kayaks and Maunie's inflatable canoe out for a little paddle.  After a  few "just a bit further's", and finally a "we've GOT to be about 1/2 way around by now", we decided to circumnavigate the island.  Was a bit of a long haul, but a beautiful day.  Saw lots of birds including the little blue penguins which are native to the islands here.  Pretty cool. 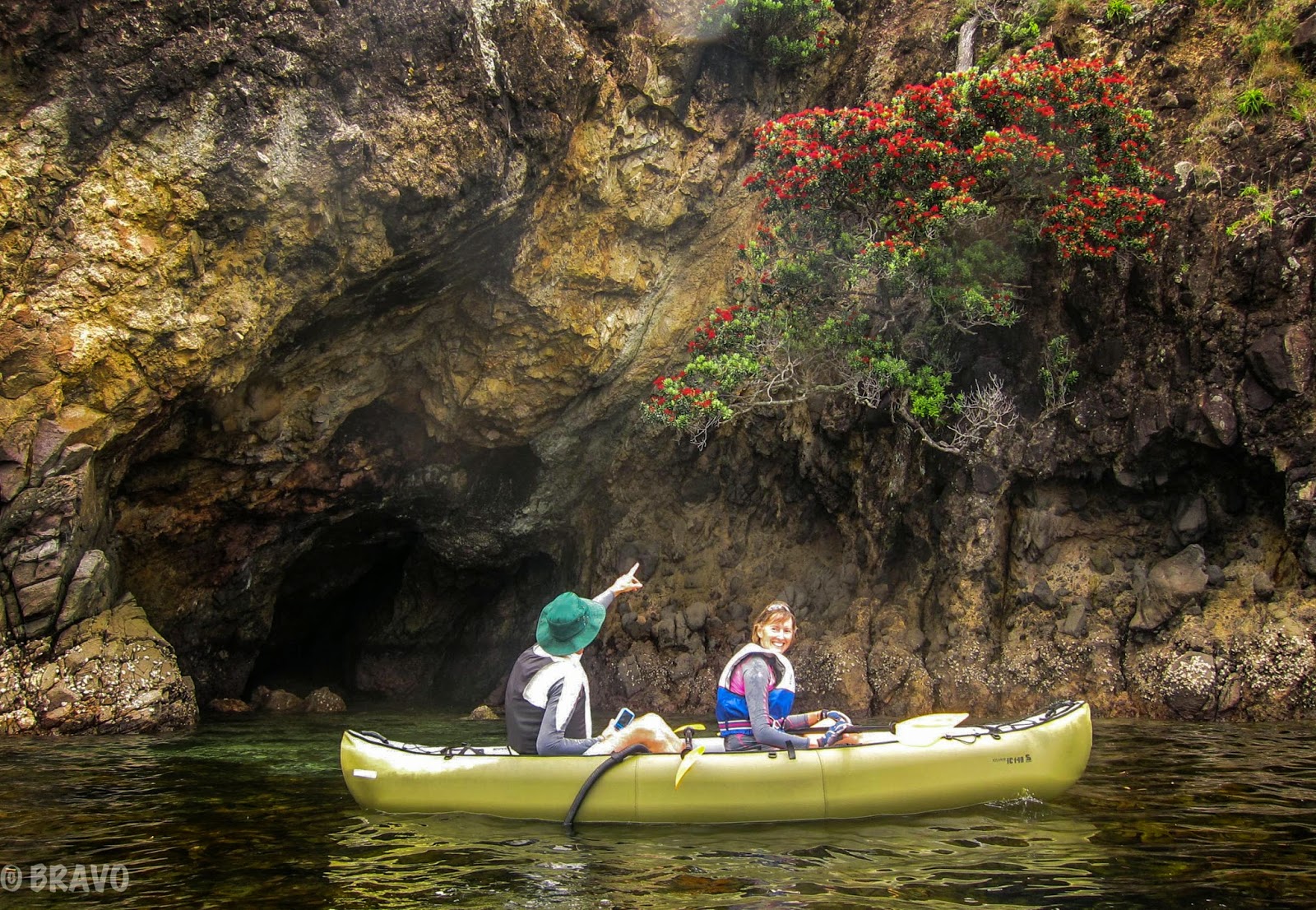 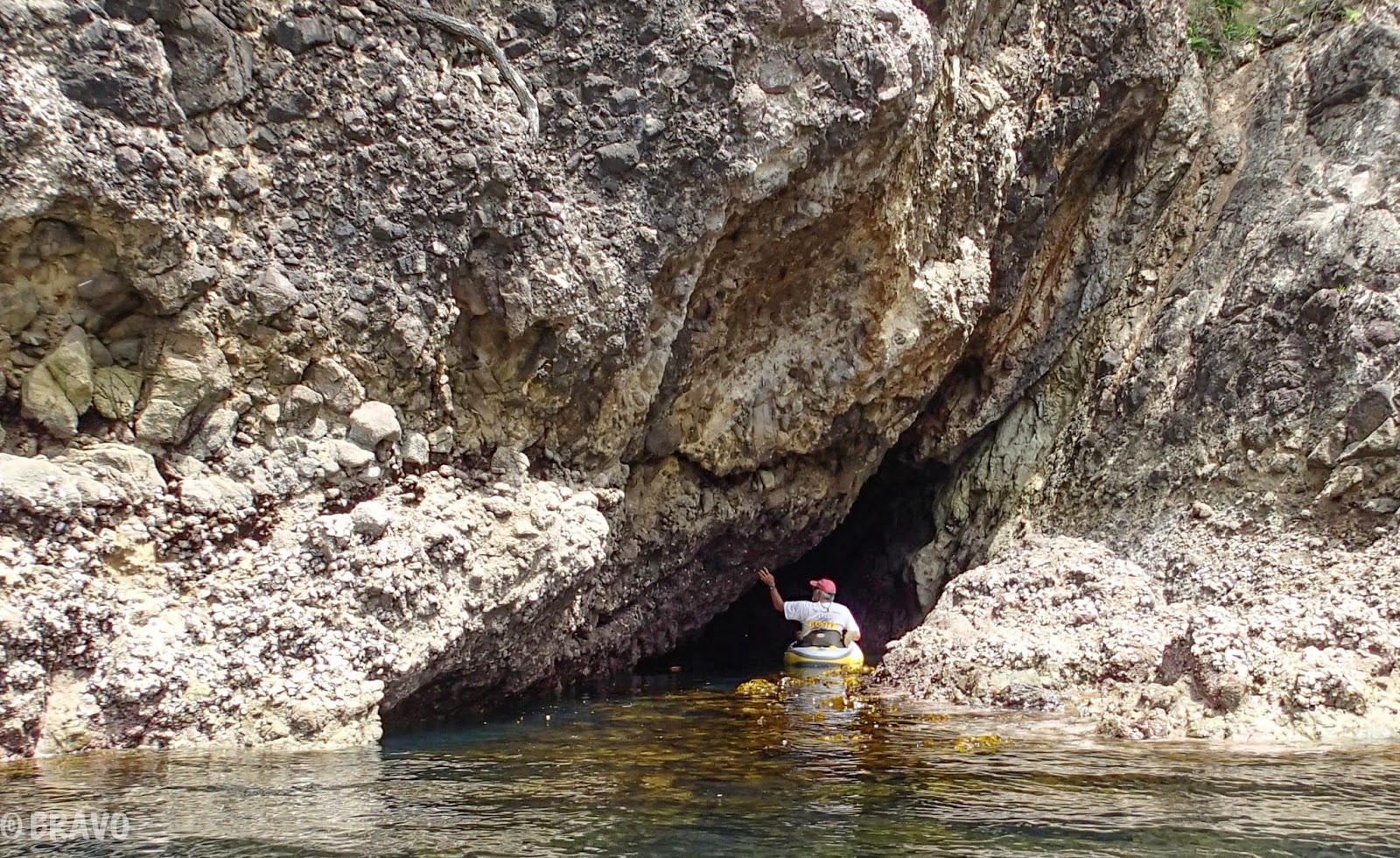 One fine day we couldn't resist climbing up Hirakimata.  The hike up to the 2037 ft high point of GBI is a good workout, and has amazing 360 degree views from the summit.  Starting at our dinghy landing spot at Bush's Beach in Kaiarara Bay, the trails passed through low scrub forests as they worked up the valley.  We passed two DOC huts along the way, each with a capacity of about 25 people (we only saw 5 other people on the trail the entire day). Along the river the trail was badly
washed out, as the island was hit hard by major flooding and land slides in June, 2014. 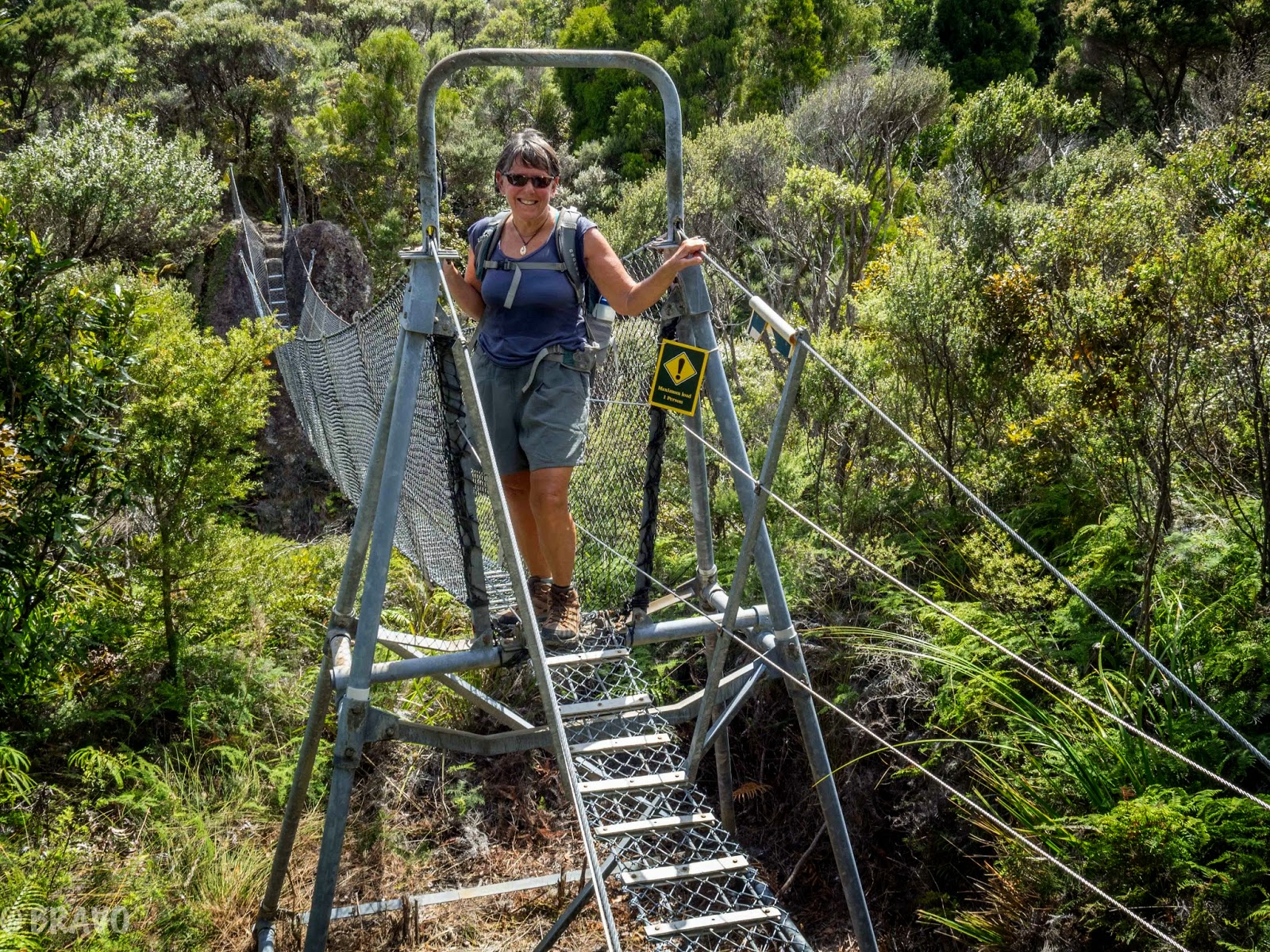 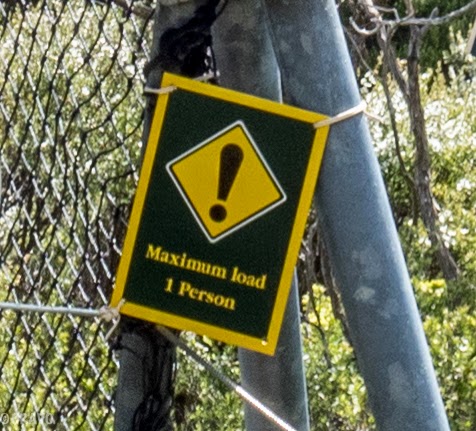 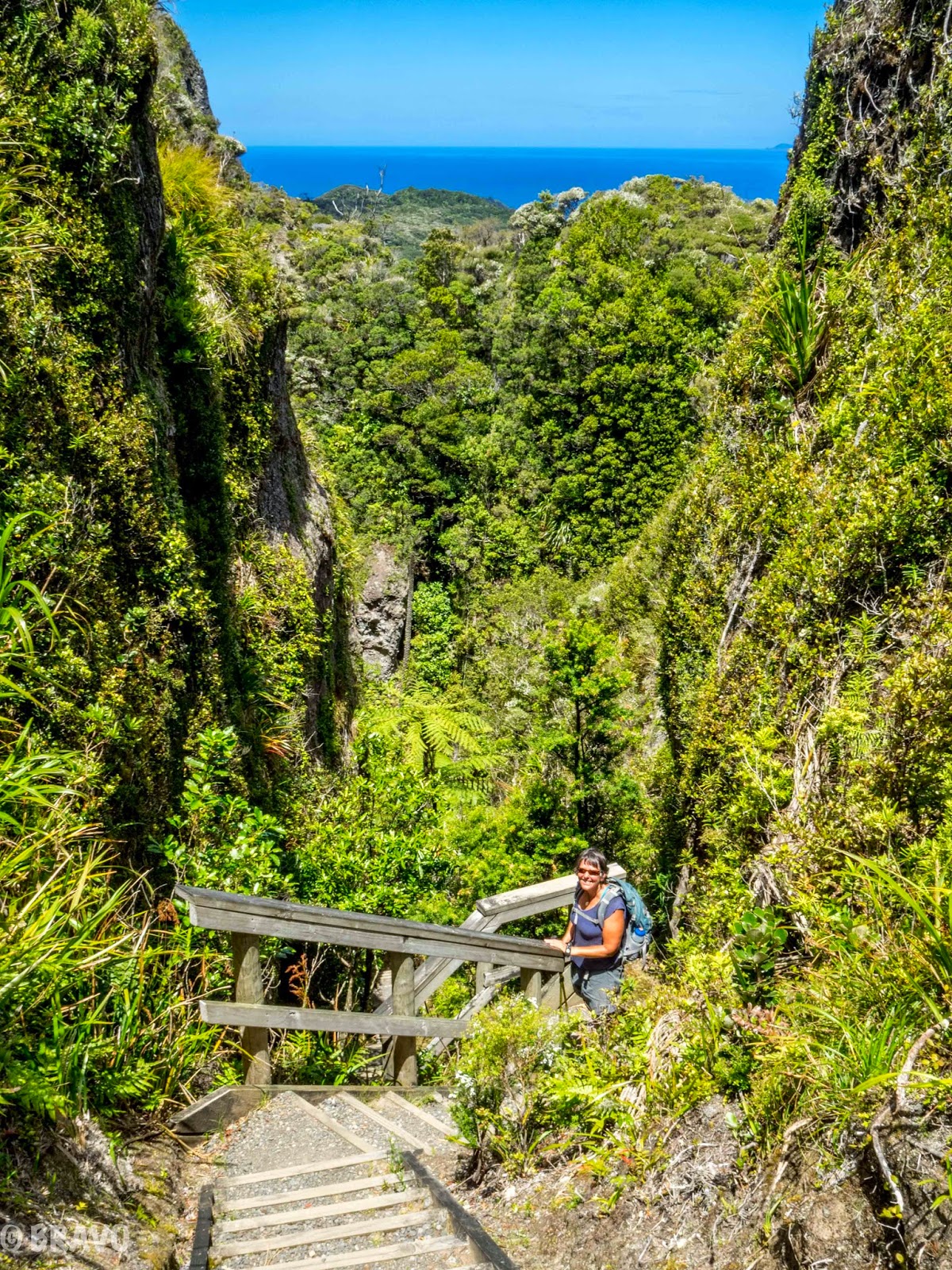 
About 3 hours from the start point we reached the summit, and the view was pretty sweet!  "Vale la pena" as they say in South America....."worth the pain"!!!  It was clear enough to easily see the Coromandel Peninsula of the North Island over 20 miles away. 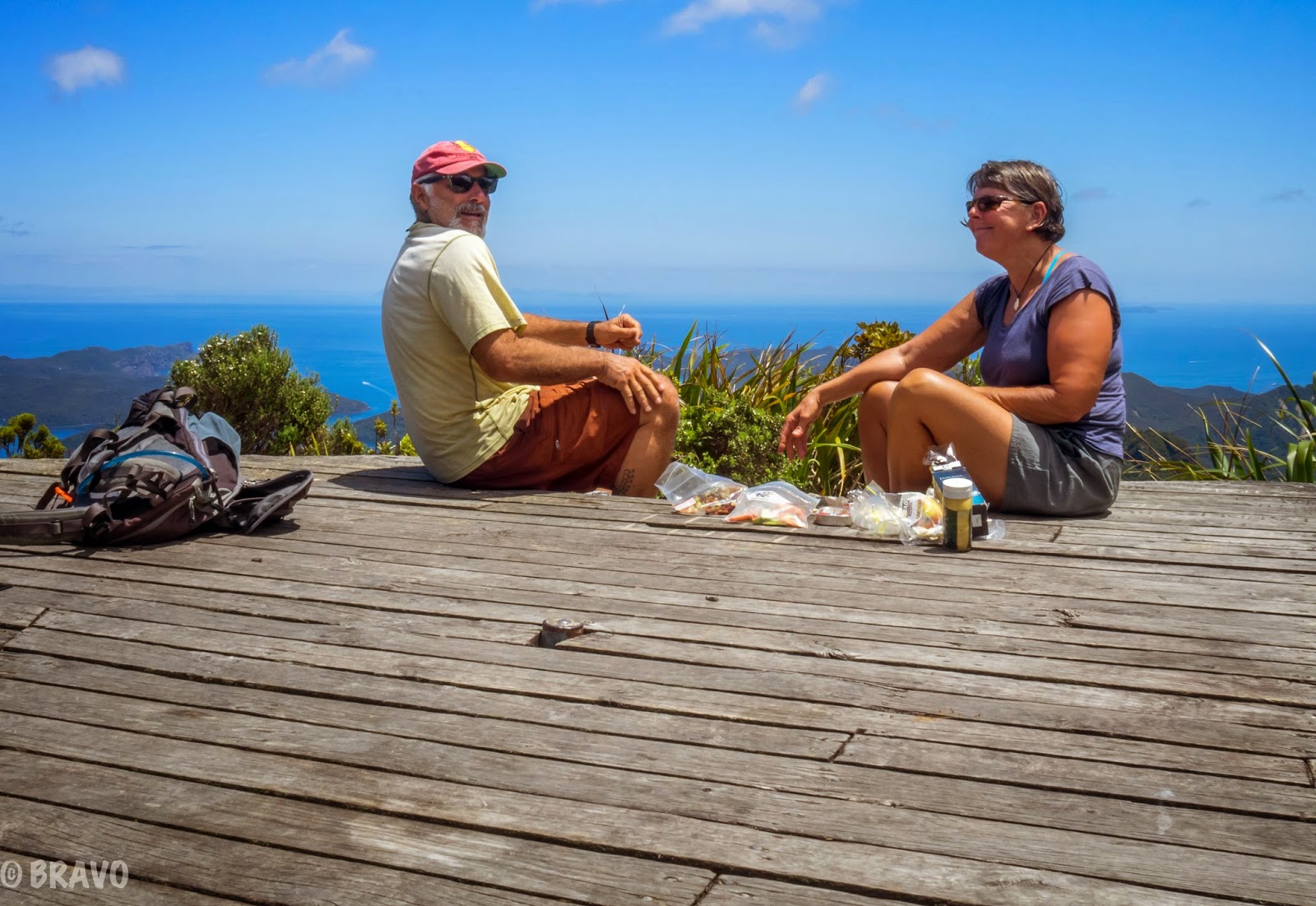 After lunch on top, we took the Windy Canyon trail down to the other (east) side of the island, and hitchhiked back to our dinghy, about 7 hours after we started.  A great day! 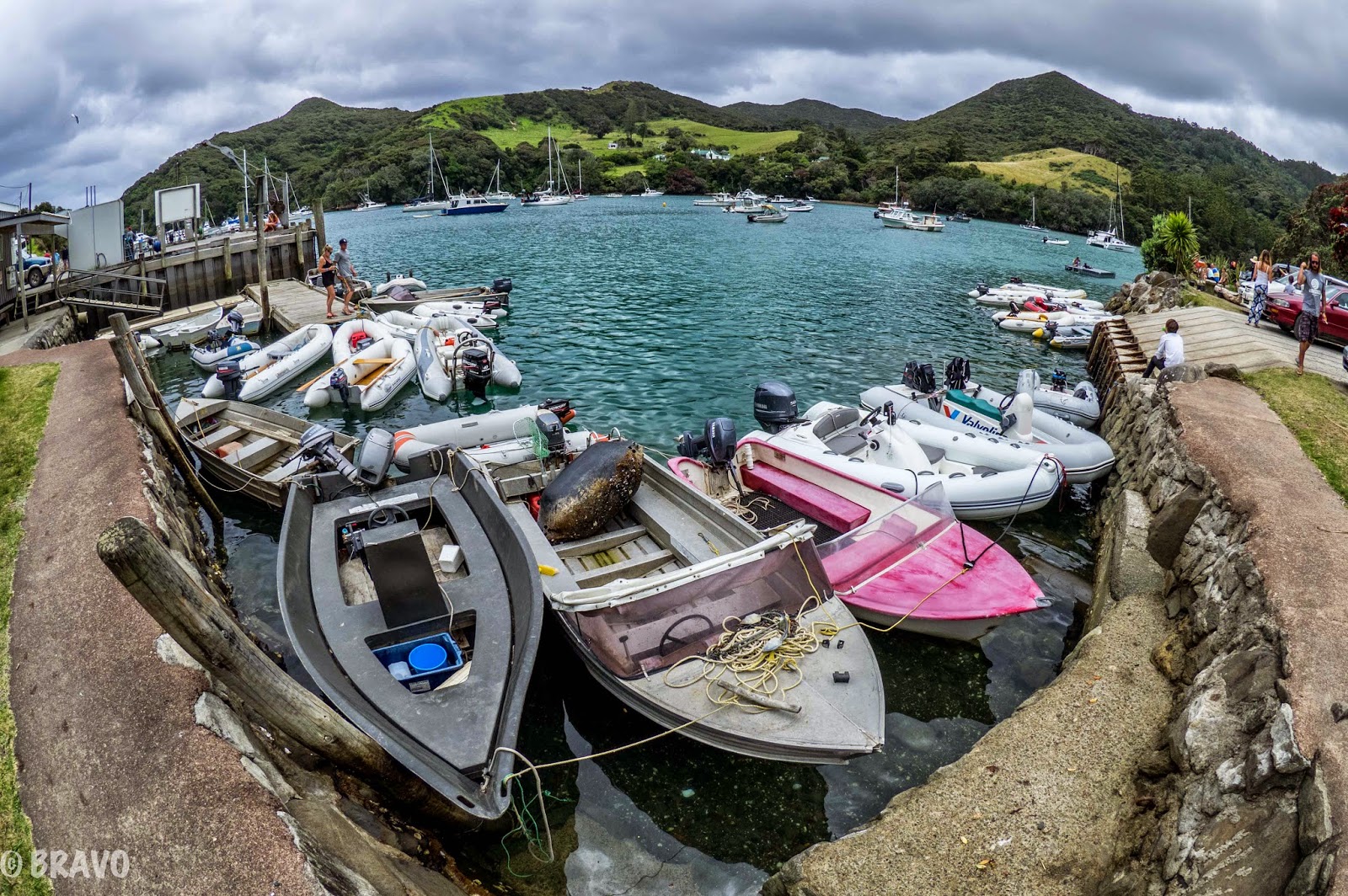 Yesterday we dinghied over to Port Fitzroy, the hub of this part of the island with a general store, fuel dock, and a few houses.  It was Mussel Fest, an annual music, art, food and beer festival.  The mussel fritters were hot, the beer was cold, and some of the music was pretty damned good.  How could we lose!!!  We shared the festivities with the crowd from several hundred boats anchored in the area, good fun!

The rest of "the Barrier" is great as well, with heaps of cool spots and isolated bays and beaches scattered around.  All in all, a terrific spot for a holiday, and a welcome break before we head back to Whangarei, haul BRAVO out of the water, and begin the lengthy list of projects that await us. 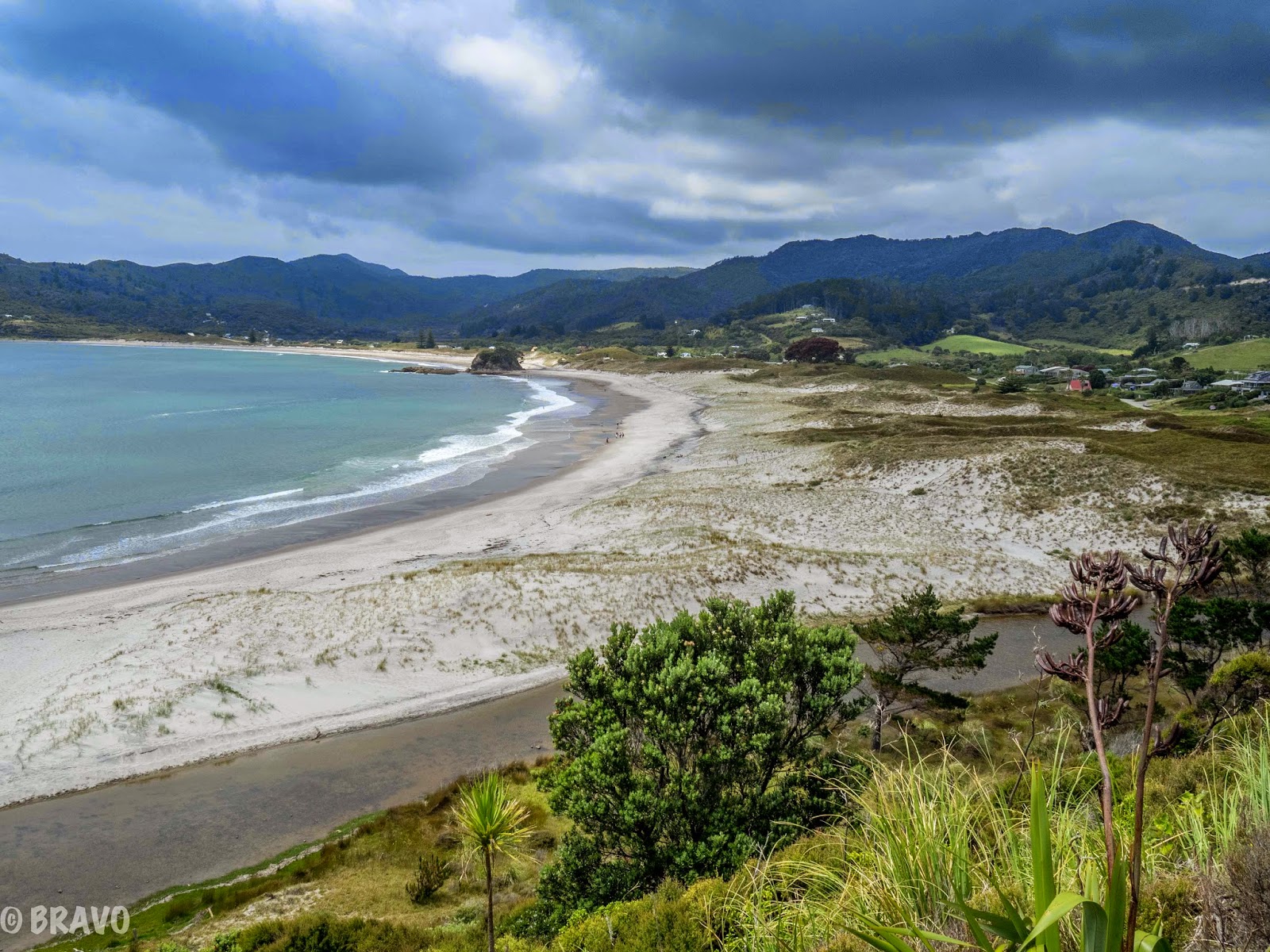 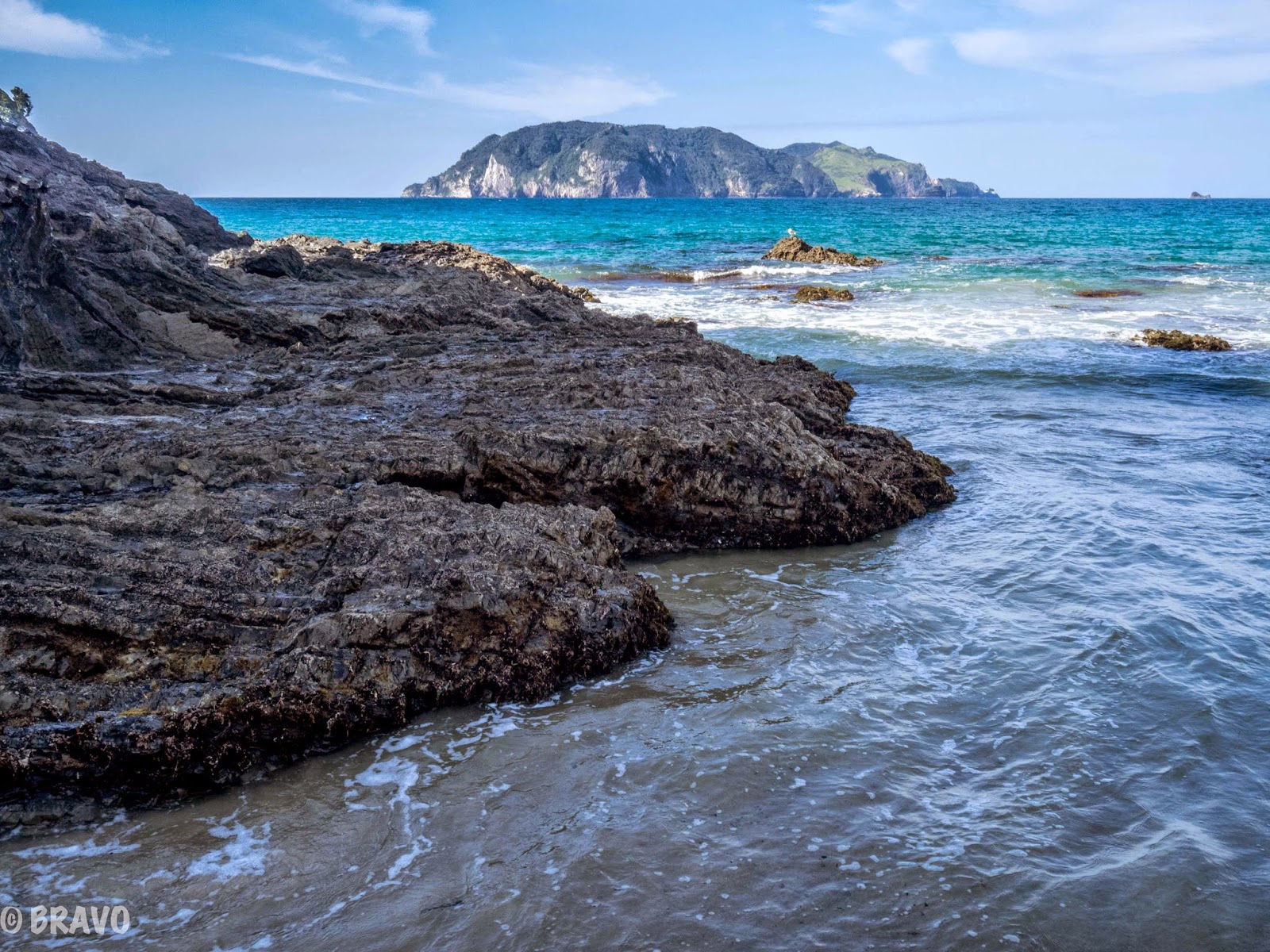 Finally, as promised, here are some Christmas day pix.  BTW, we do post some stuff just on Facebook from time to time, so if you haven't friended us there, you may want to.  Don't worry, just occasional posts!


Did a couple of fun hikes on Christmas Day.....one to Whangarei Falls, another up to Bream Head..... 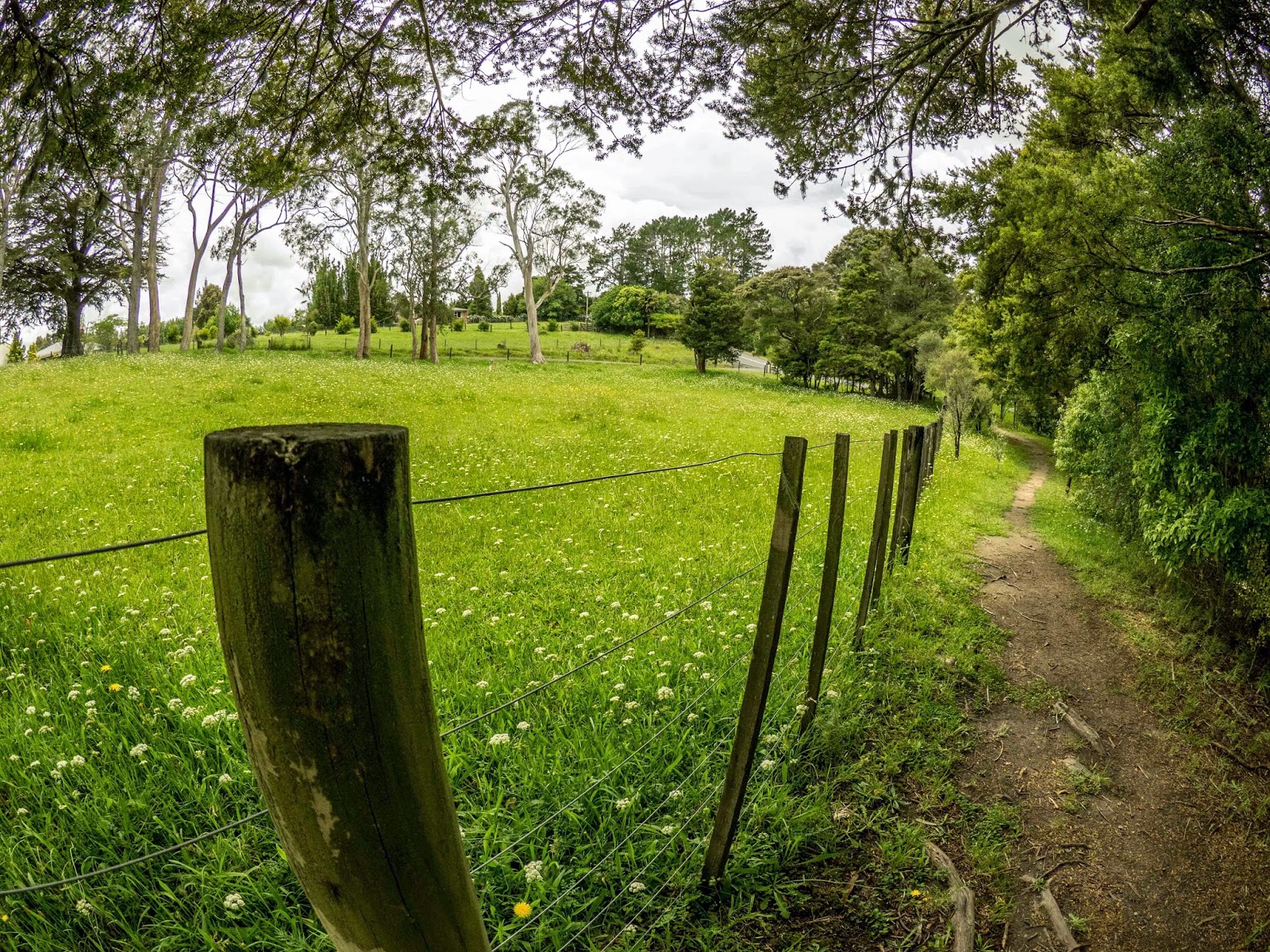 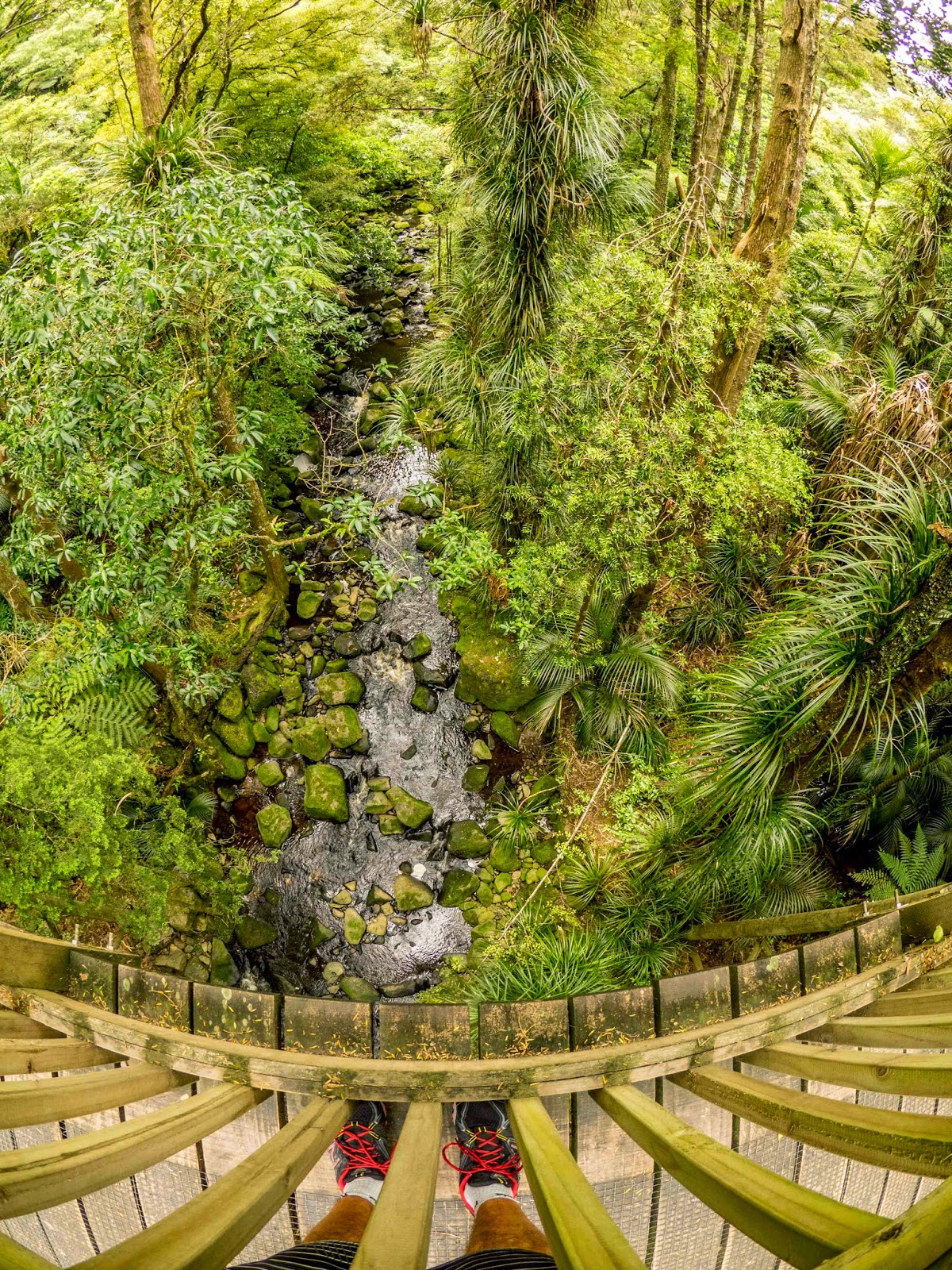 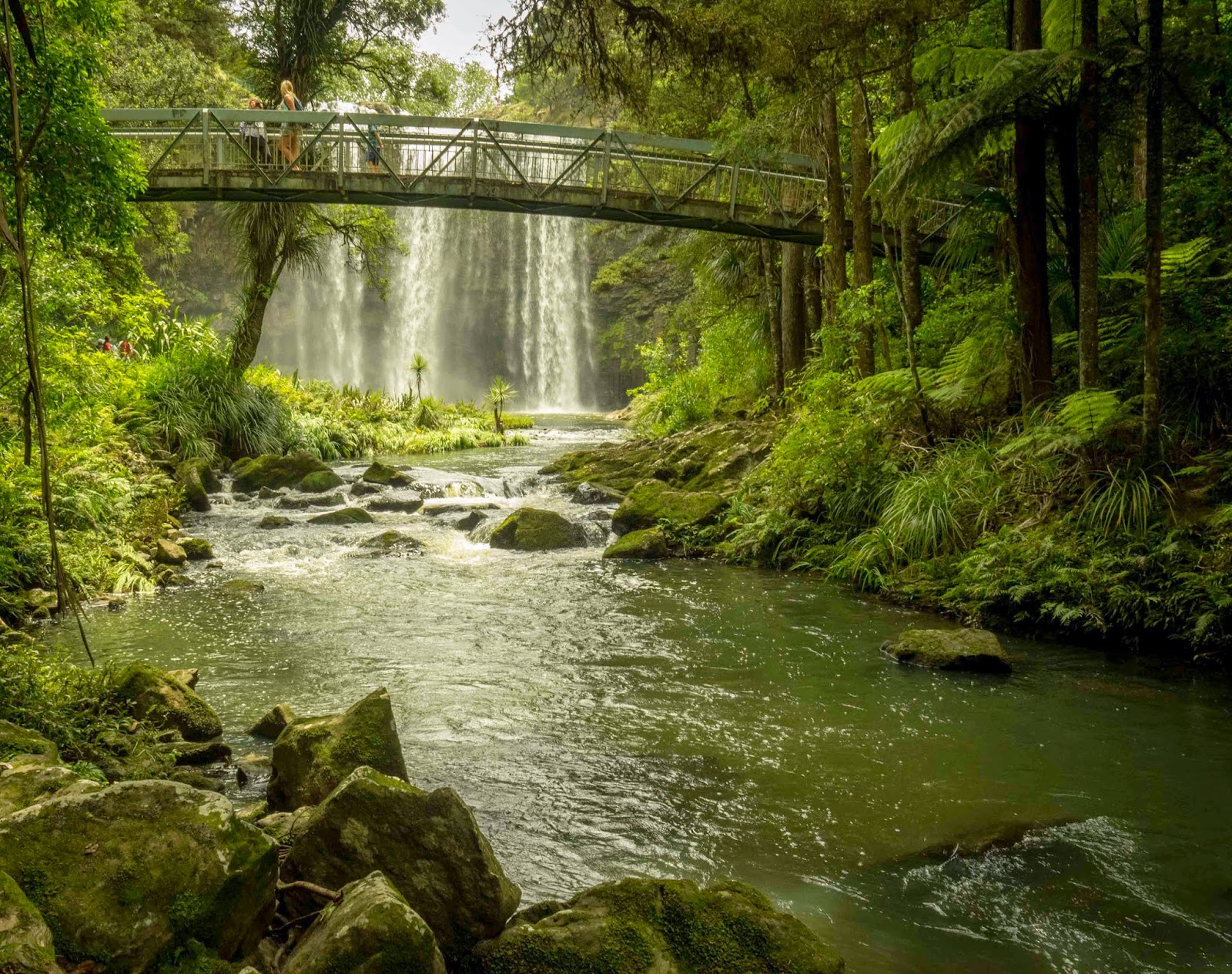 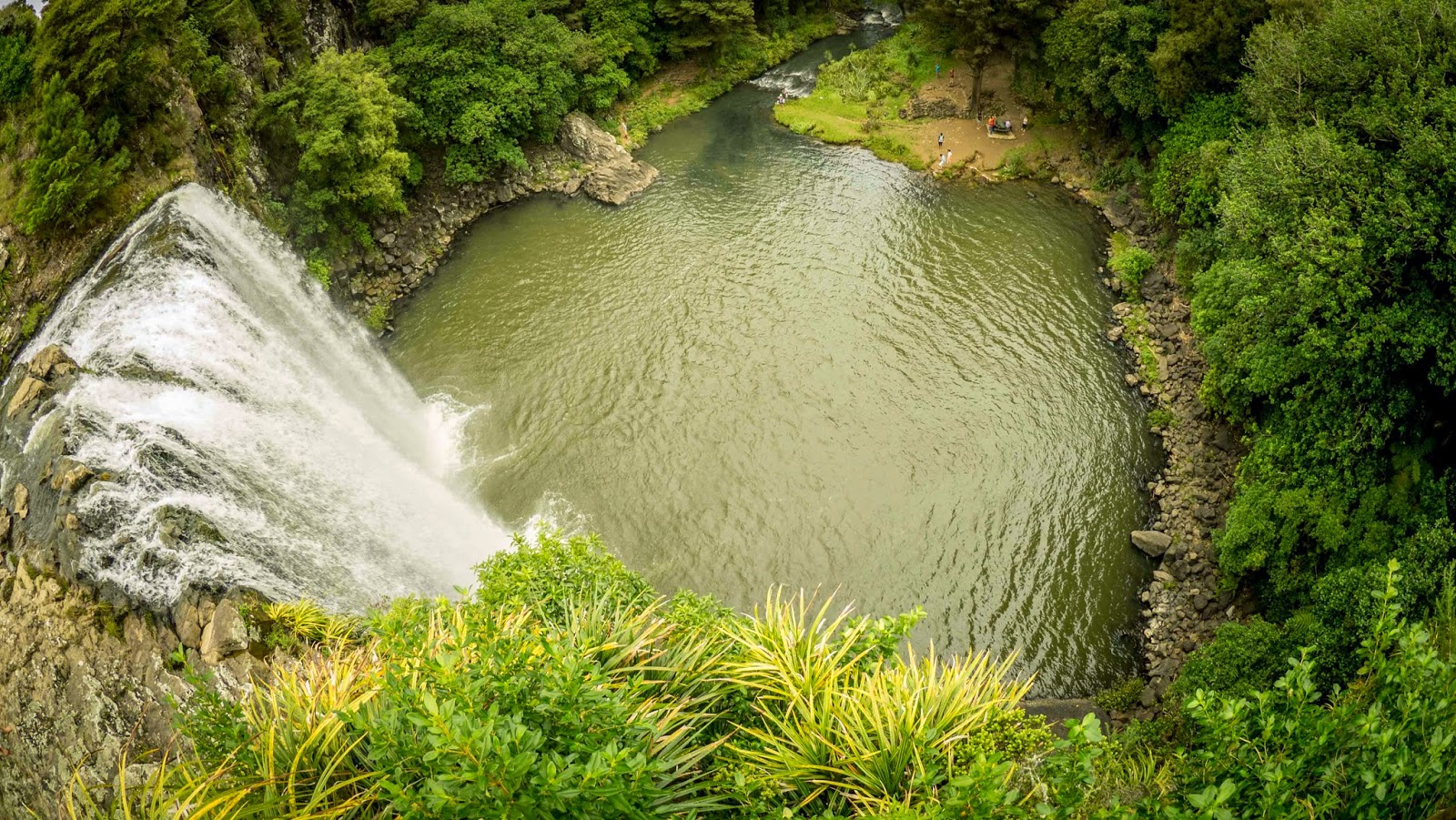 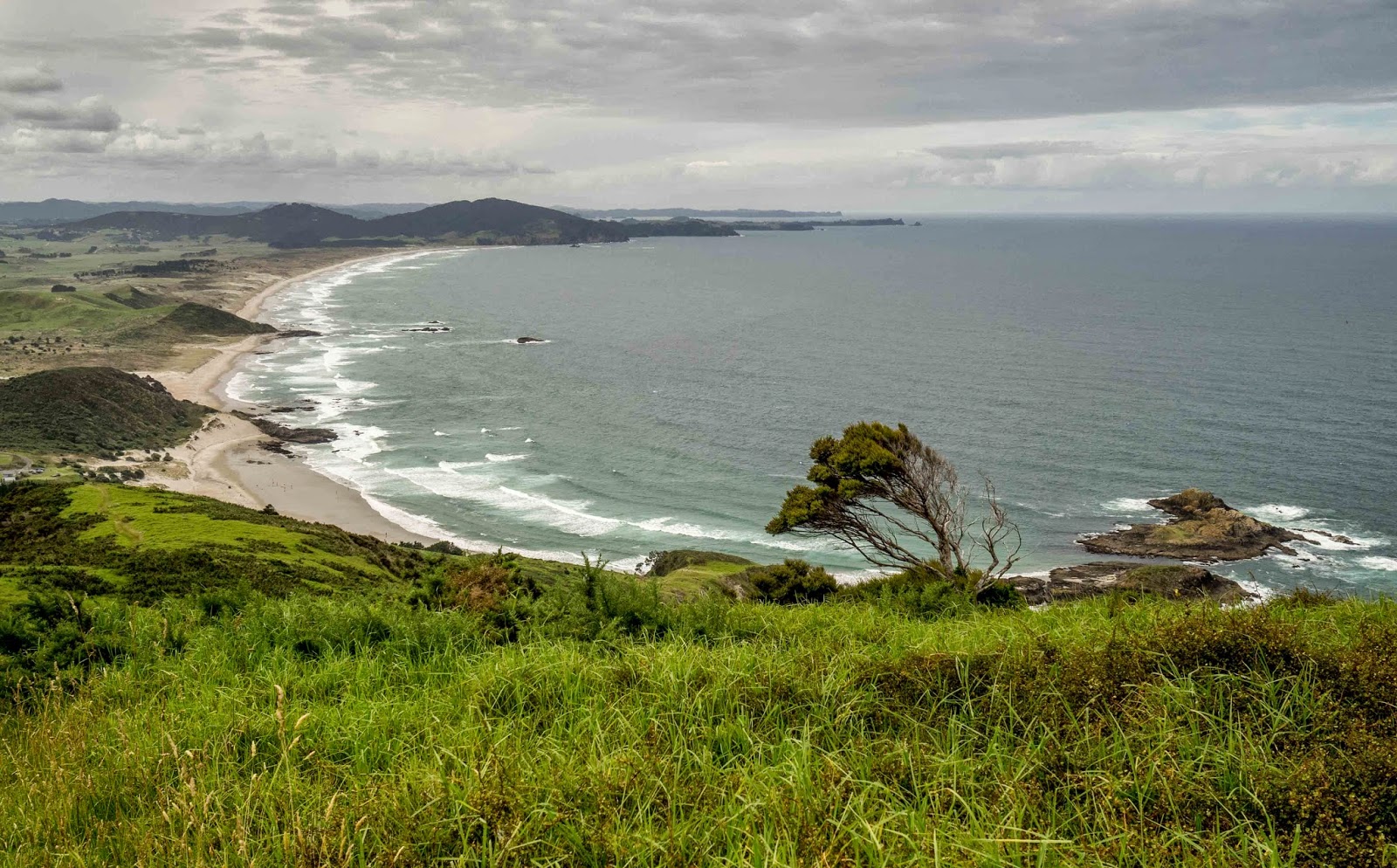