The beat goes on in Whangarei

As most of the fleet has left NZ for warmer climes, the good ship Bravo is holding down the fort here in Whangarei.

Cindi's recovery from the accident is well underway.   She's not used to this degree of immobility,and at this point the biggest risk is death by boredom!!!   Thursday marked 6 weeks since her fall, and a visit to the clinic for x-rays and evaluation.  The news was pretty good.  Healing of the bone in her arm has progressed enough to have the cast removed.  Yeah!!!  Unfortunately it didn't wind up exactly in it's original orientation, and as a result, the radius bone is now a few mm shorter than it was before.  Likely will be fine, but could cause some issues down the road that a "simple" surgery could repair.  Ughhhhh.....  But at least getting free of the cast is a big relief! 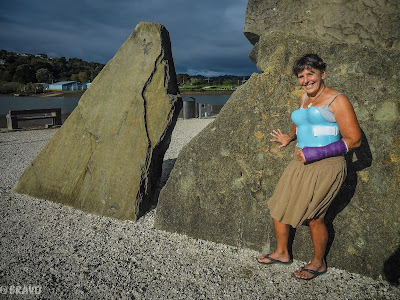 As for her back, the orthopod told her she could begin to wean off the brace.....The bits of the crushed vertebrae are largely done healing, and will continue to solidify over the next 6 weeks.  Will then be more x-rays and another progress evaluation.

While quite hot, the Xena the Warrior Princess look will hopefully soon be a distant memory!!!

The best news was the doc's opinion that Cindi will be able to go back to the voyaging lifestyle after physical therapy has been completed!!!!   YAY!!!!!   She will hopefully start P.T. next week.


With use of a walker, Cindi's been getting in a 3 mile walk around the waterfront on a walking/biking trail nearly every day, rain allowing.  Adam joins when back from the boatyard.


Cindi's also been busy on a project, building a series drogue for the boat from a kit that we brought back from the US.  Made up of 139 sewn cones on over 300 feet of rope, the repetitive project is perfect for whiling away some hours stuck indoors.

Projects back at the boatyard continue at a rather relaxed pace.  Currently underway:
-  Install of new B&G instruments, including forward scanning sonar, wind, depth, speedo, and chart plotter, all on the new NMEA 2000 data backbone. 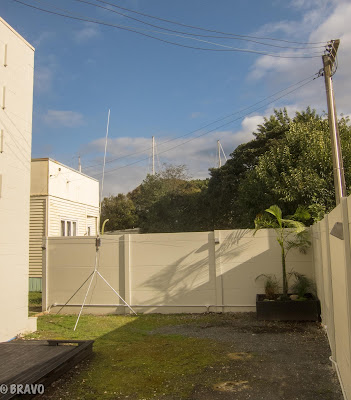 Back at the motel apartment, Adam's inner geek called out, and he put a portable ham radio antenna outside the terrace.  He talks to friends back in Hawaii, Canada, and the Pacific NW every other evening. 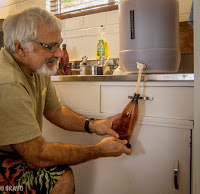 Also time to brew a batch of IPA, just bottled last week ago.  Fingers crossed for a tasty brew!!!

We've finally decided to sell our house.  It wasn't an easy decision, but keeping it as a rental from the other side of the world was just proving too much of a headache.  The Seattle market sounds good for selling and it's a great time of year to do the deed.  It's been a lot of work to get it ready from here, installing new flooring, designing a new entry, landscaping, etc., but it should go on the market next week.  A great team of builder, landscaper and realtor are making it possible.  Fingers crossed for a quick sale.  (If interested, don't be shy!!!)


So that's the news from Whangarei.  Mostly good on Cindi's recovery.  We still await word from NZ immigration officials that we'll be able to extend our stay by a year to complete physical therapy, as our already extended visas expire in less than 2 weeks!!  Winter is rapidly approaching down here, but June 21 is just around the corner, bringing a promise of longer days to come.  We look forward to continued adventures and exploration in New Zealand in the coming year.

Cheers, all, and thanks for the good wishes!


Will sign off with a couple of fun emails that had us cracking up:

And when they finally opened that clam
She said "I'm a wee bit taller I am!"
She stood so straight
And she felt so great
She could tie her own shoes and sail first mate


Down in the Land of the Kiwi,
Lies a most intrepid sailor named Cindi...
Now I can't tell you why, but she decided to fly,
And the "tail" had a terrible ending....