Civilization...not all it's made out to be!!!

Wow, been well over a month since our last post...sorry about that, but internet access has been sporadic to non-existent, w/ the emphasis on the latter.  Several of you warped readers probably figured we'd gone feral, perhaps getting ready to regale you with tales of narco trafficking or gold mining adventures in the Sierra Giganta range on the Baja when next we surfaced.  Well, sorry to disappoint...we may at times seem feral, but life has been pretty hum drum aboard Bravo, for the most part.  But we have put on a bunch o' miles since we last checked in with you, so here are the highlights of the past month...

First, we made a whirlwind trip back to the US in mid October.  Hurricane season had pretty much come to a close, and with nothing looming in the "tropical kitchen", we deemed it safe to head north for a quick week's road trip.   Leaving Bravo on a mooring in Puerto Escondido, we rented a car, and headed north on the Baja Highway, also known as Hwy 1.  The last time Adam drove the highway was in the mid 1970's, the year after the road was paved.  The vehicle was different (then it was an old Ford Econoline former telephone company van, sporting a canoe on the roof, with 3 long haired reprobates on their Fear and Loathing "trip of self discovery", now it was a rented Nissan sedan with 2 shorter haired aging adventurers looking to inject some hard earned cash into both the Mexican and US economies!!!) but the sights were much as remembered from the past.  Our primary mission:  take advantage of this last opportunity to buy things, both toys and necessities, in the US before we head into more remote parts of the world.  Cindi, too, wanted to make a two day trip to Chicago to visit friends while Adam shopped for goodies in southern Cal, and enjoyed a visit with Cindi's brother and family.  Final tally included a new scuba dive compressor to fill our dive tanks, a couple of additional tanks, 4 new 100 pound batteries, and on and on.  That bad boy of a little car was a real low rider as we made our way back across the border.  You know the old saying, "nothing handles like a rental"????  Well, we put it to the test, as we made our way back south.  The multiple military checkpoints were a breeze, but it was the miles of construction which it took it's toll on both car and drivers!!!  How far can you really expect a little Nissan to handle 4" deep dust, sharing the road with whacko semi drivers and cows and burros???  Well, we made it ok, with only a few dings due to off road excursions to show for our troubles!!!  Next time, it might be better to take a few more days.


Wow, was it ever a great feeling to be back aboard Bravo, back to our more relaxed pace of travel at say 7 miles per hour than trying to pass semi's in a hail of gravel at 70.  We got all of the new gear stowed and headed south, backtracking much of our route of earlier in the year.  We did have some new anchorages to explore, and the really great thing was that the temps have now dropped to allow happy hiking.  And the hiking opportunities on the Baja and the islands are fantastic. 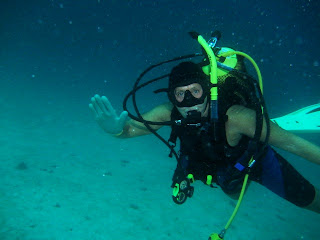 The other bonus was that as we worked south, the water clarity improved dramatically, which made for terrific snorkeling and scuba opportunities.

But every silver lining has a cloud, or some other cliche oughta fit here...  As we got closer to La Paz, the anchorages were no longer our own.  We were now sharing them with not just other cruisers, as had been the case in the northern Sea this summer, but also with a multitude of mega power yachts based in La Paz.  And with them come their toys.....spelled J-E-T S-K-I-I-S....Man we hate those suckers, as they seem to love to use Bravo as their turning mark of their course.  Ahhhh....civilization.....

Except for our reentry issues, though, these past few weeks have really been fun and active.   Since we've been unable to post any photos without internet, we'll include a few here of some recent exploits.  Unfortunately our MacBook has died an ugly graphics card death, so we don't have access to most of our photos until our return to the US later this month. 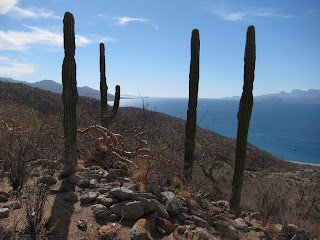 Hiking:  As noted, the hikes have been great.  One good thing about the desert, is that in many places, trails are just not that important...you can just pick a distant destination or peak and scramble up there.  Not at all like our Pacific NW haunts, here the undergrowth is non existent, and if you're willing to risk the occasional backtrack at a cliff or boulder impasse, it seems to work well. 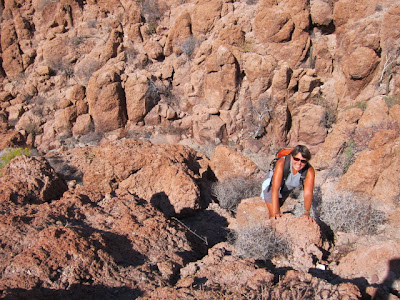 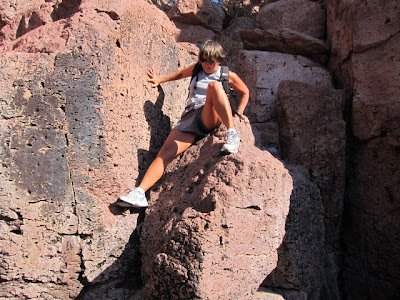 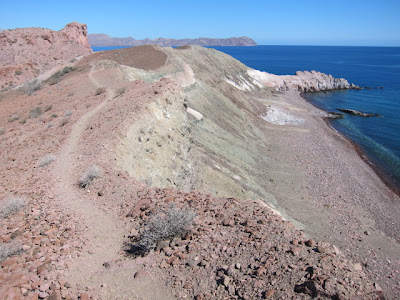 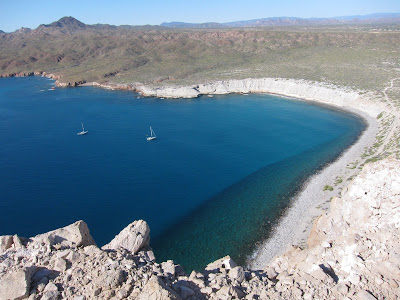 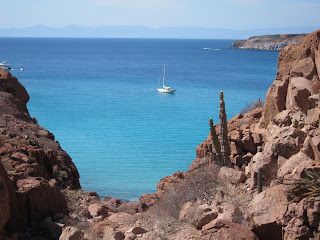 Diving:  The water has really been getting clearer, and we've enjoyed using our underwater cameras.  Still work in progress, but it's fun to get some of the underwater life on "film".  Unfortunately our shots of our swim with the whale sharks are on the Mac, so will need to wait to upload those. 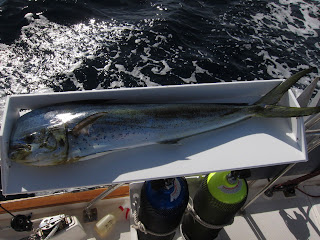 Fishing report:  The fishing has continued to be outstanding.  Mainly dorado these days.  This 50" beauty kept us feasting for several days!!!


Both crew and boat are badly in need of refurbishment after 4 months up in the northern sea!!! 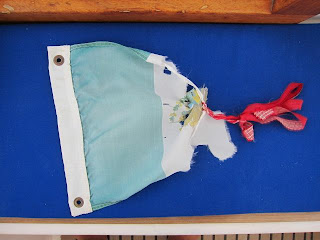 Here's our Mexican "courtesy flag" as we reenter La Paz...already have a crisp new one flying!!  I wonder if our flag was the reason Bravo was boarded 6 times this summer by the Mexican navy????  Do ya think?????
That's all for now.  Hopefully will have more photos after we get our Mac repaired... (fingers crossed!!!)
We'll be heading back to the US tomorrow, flying out of La Paz, and will be back in early December.  More boat projects ahead, as we will haul out of the water for bottom painting, and a rather lengthy list of other boat jobs.  Will likely be in La Paz until after New Years, when it will be time to set sail for Central and South America.