Lady and the Tramp

For the past month or so the (Dirt) Bravo team has been tramping up a storm down here on NZ's south island!  Tramping, horseback riding, kayaking, it's been a great trip so far.

Since leaving Whangarei, we've put over 3,500 km on D.B., first stop visiting friends Gray and Carolyn in Waiwera, then down to Wellington to catch a rough ferry crossing over to Picton.


The drive south was beautiful, a nice mix of coastal and inland road. 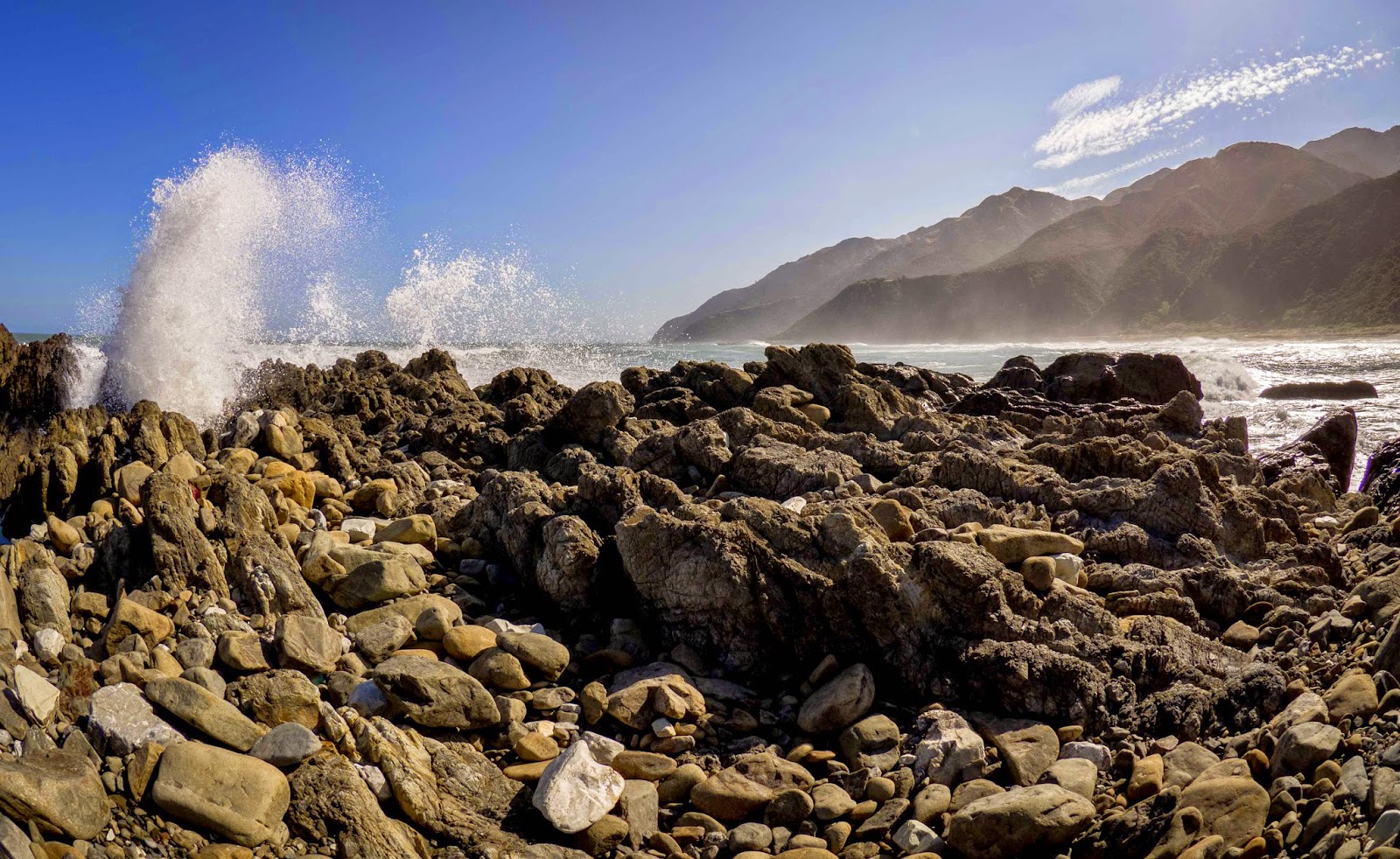 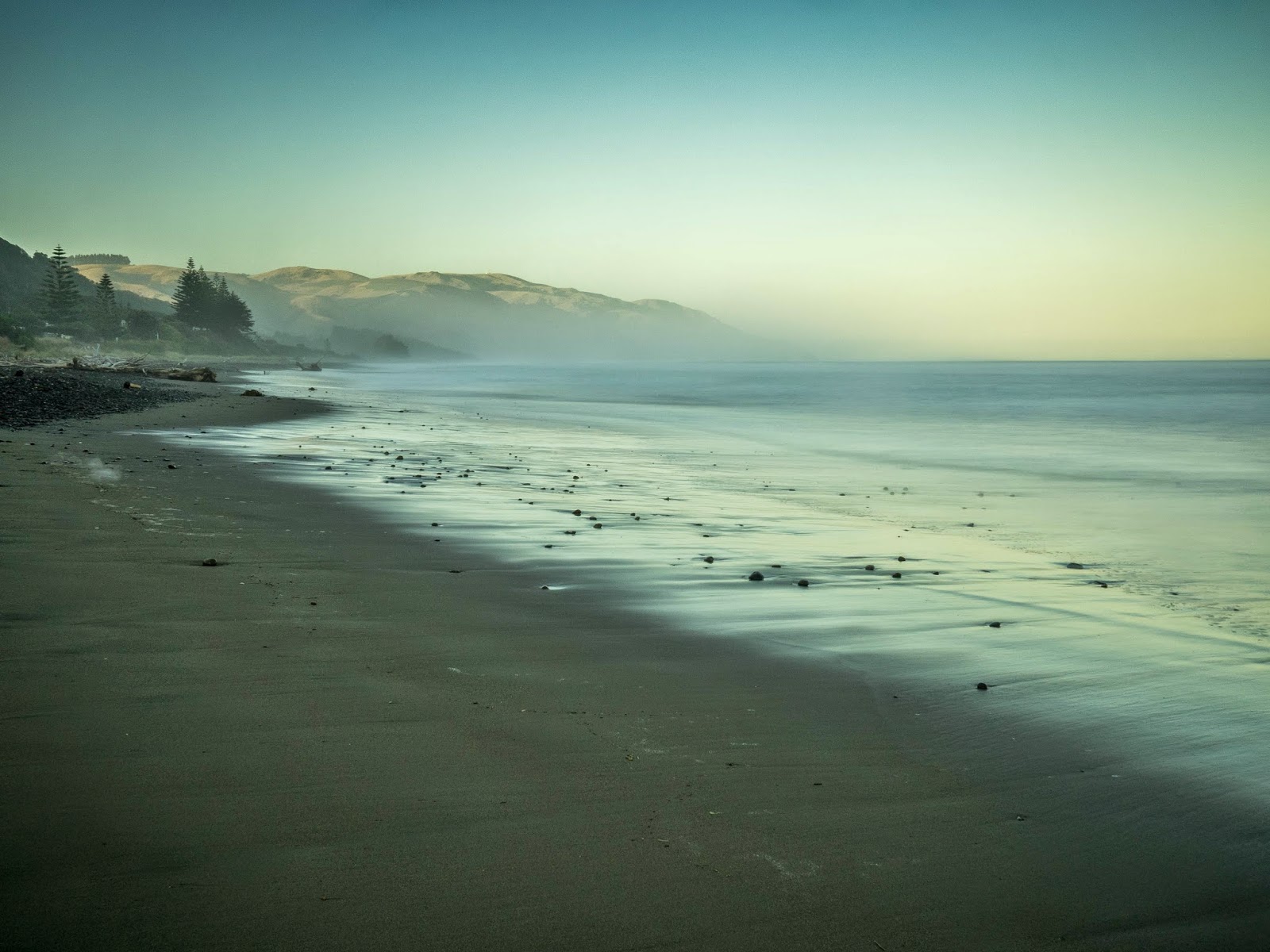 Mt Cook was blowing a stormy gale the night we camped there, and the forecast didn't look to sweet for tramping the following day, so we boogied south toward Queenstown.

In Queenstown, we met up with Seattle friends Rich and Laura at the airport and went to pick up their camper van rental.

Worked out great, except their "self contained" rental had no toilet!!!  Go figure....booked it online, as the saying goes, "the big print giveth, the small print taketh away!!!  No worries, a quick stop at a local hunting/fishing shop had them right as rain!!! 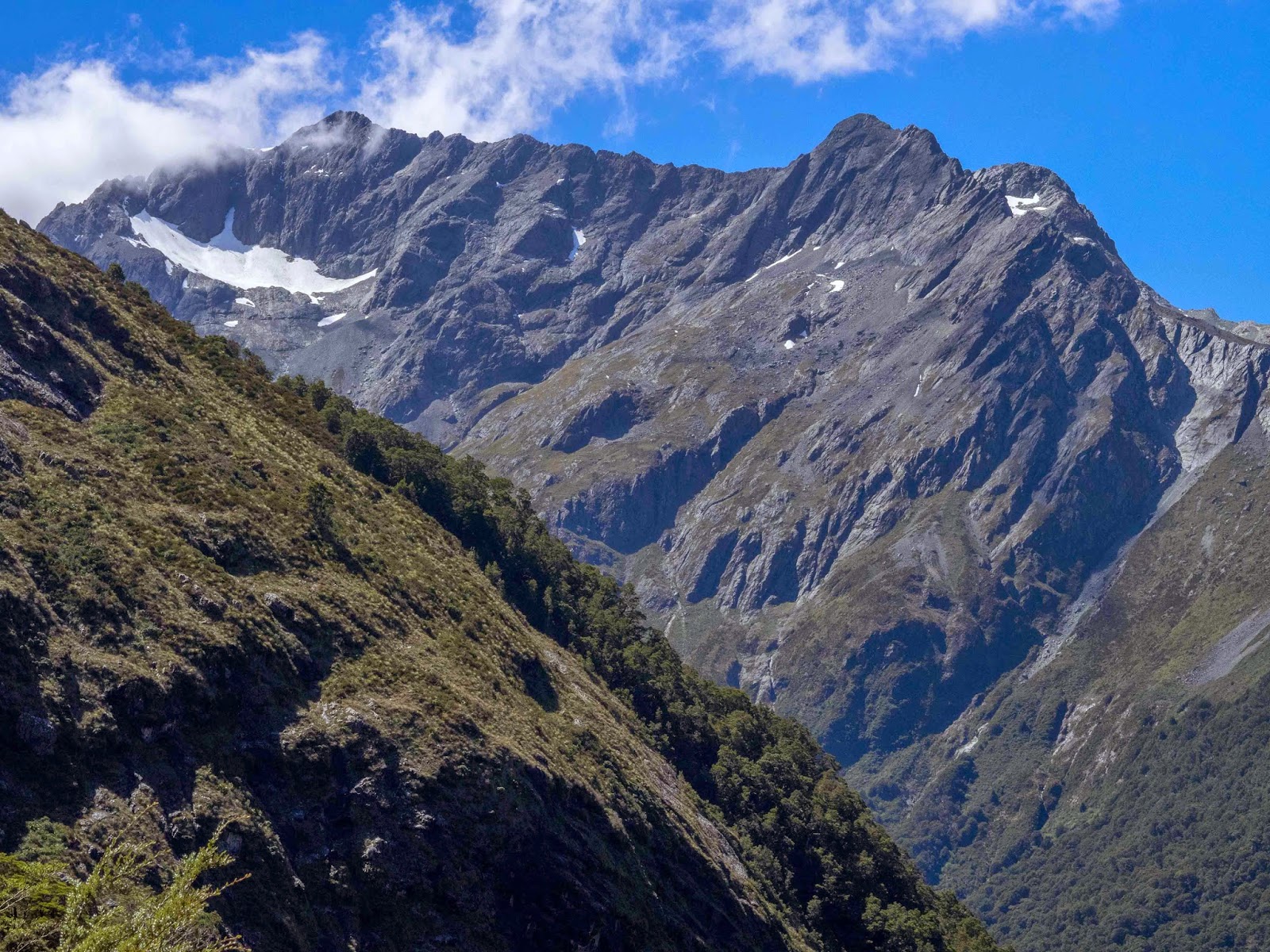 First tramp was the beginning section of the Routeburn track, one of the most famous of NZ's nine "Great Walks".  We drove up to Glenorchy and hiked up past the first hut, at the Flats, to the Falls Hut.  Spectacular mountain and river scenery, and a plush trail and huts.  Takes several months for sleeping hut reservations, which just isn't the way the Bravo's travel, but we got to experience much of the Walk by this long day hike, w/o carrying heavy packs.....sweet as!

Some pix from the Routeburn: 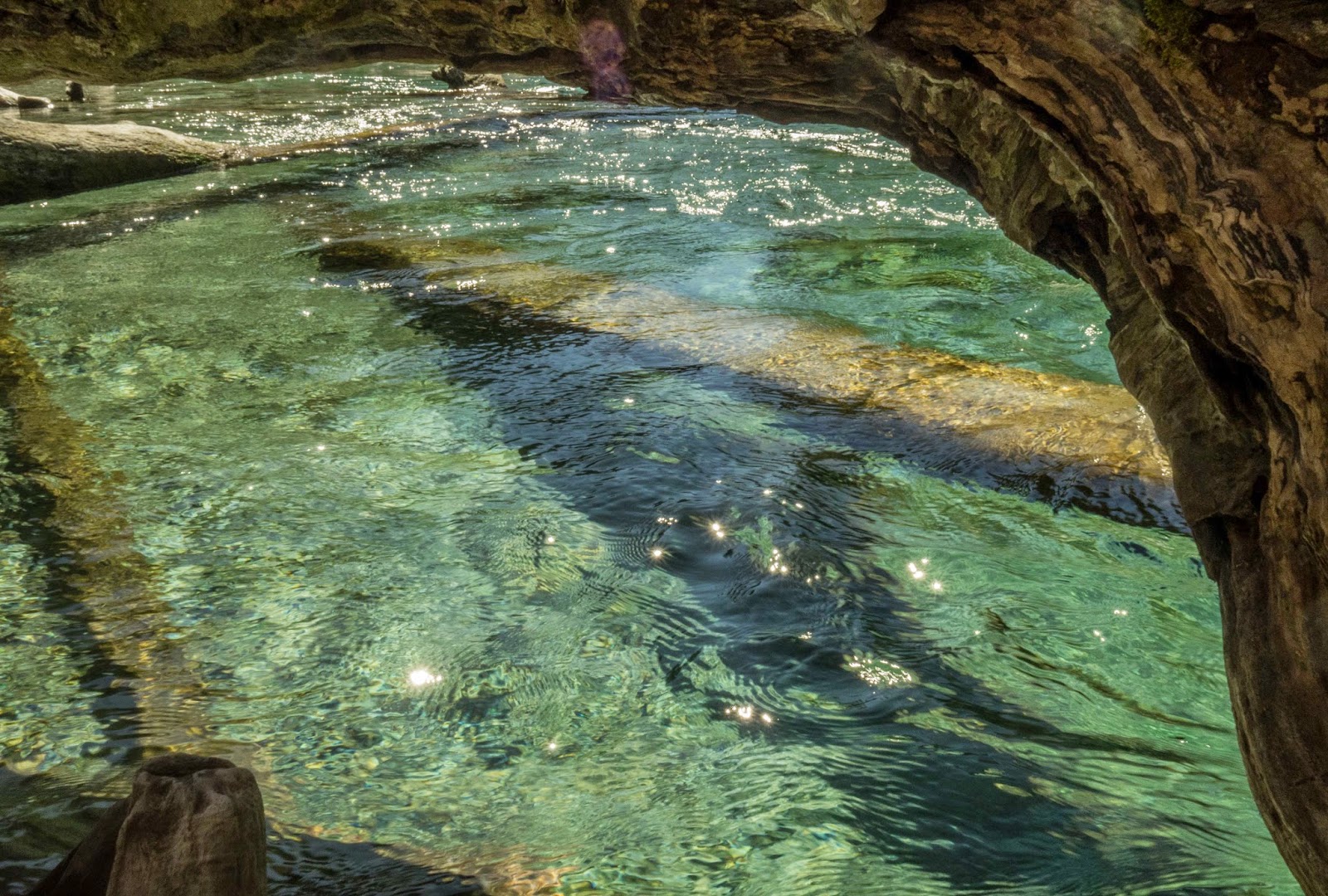 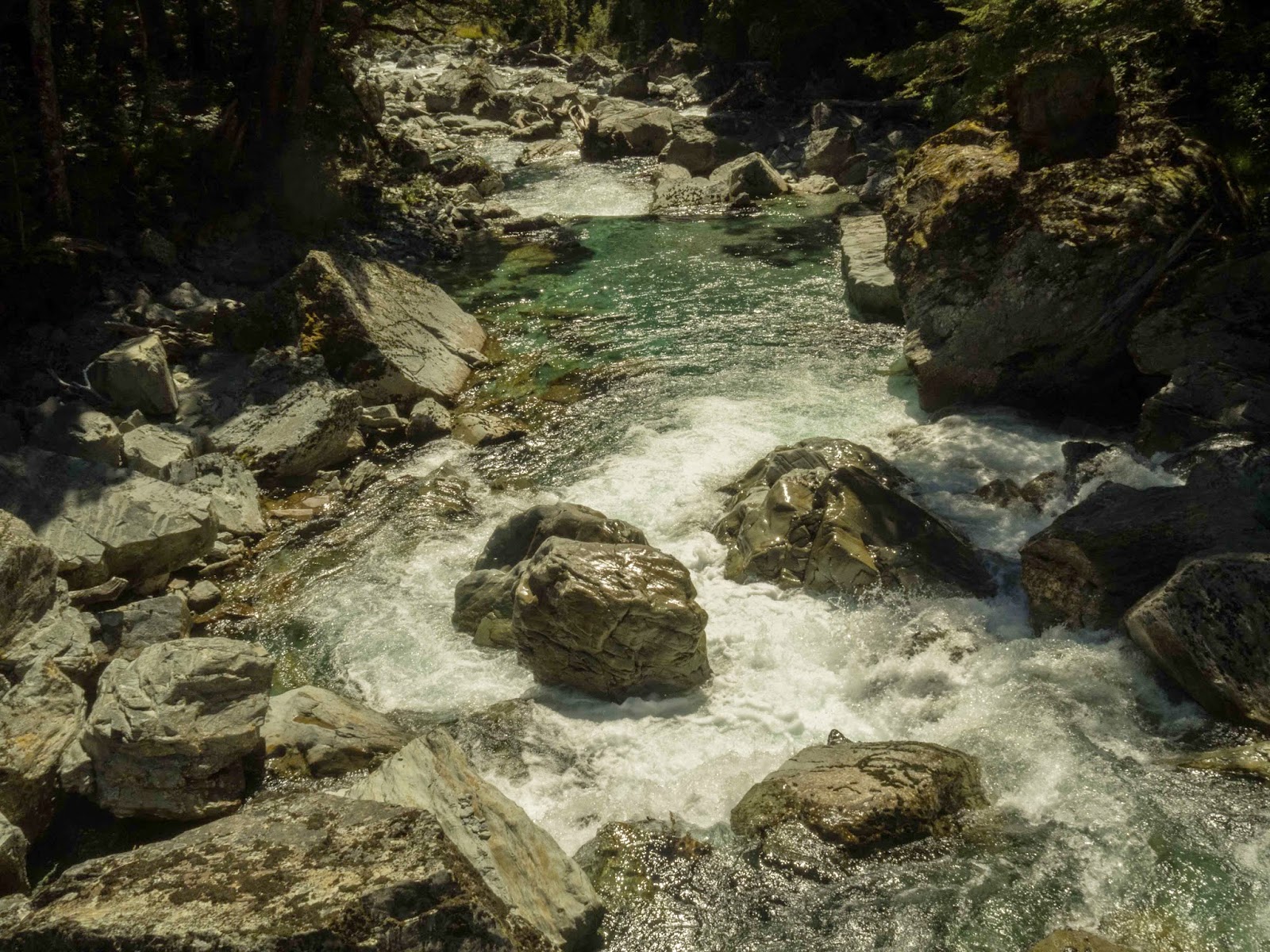 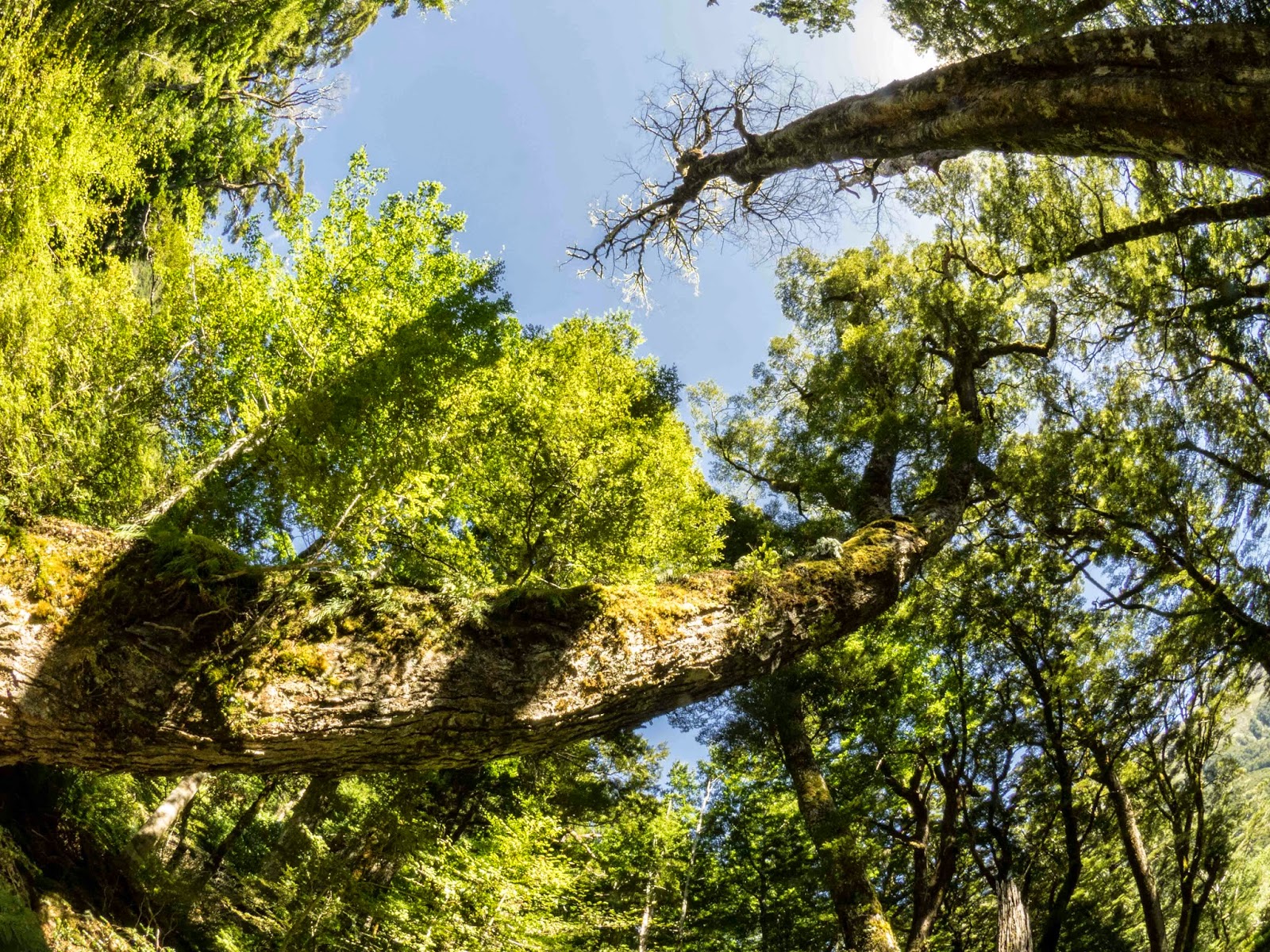 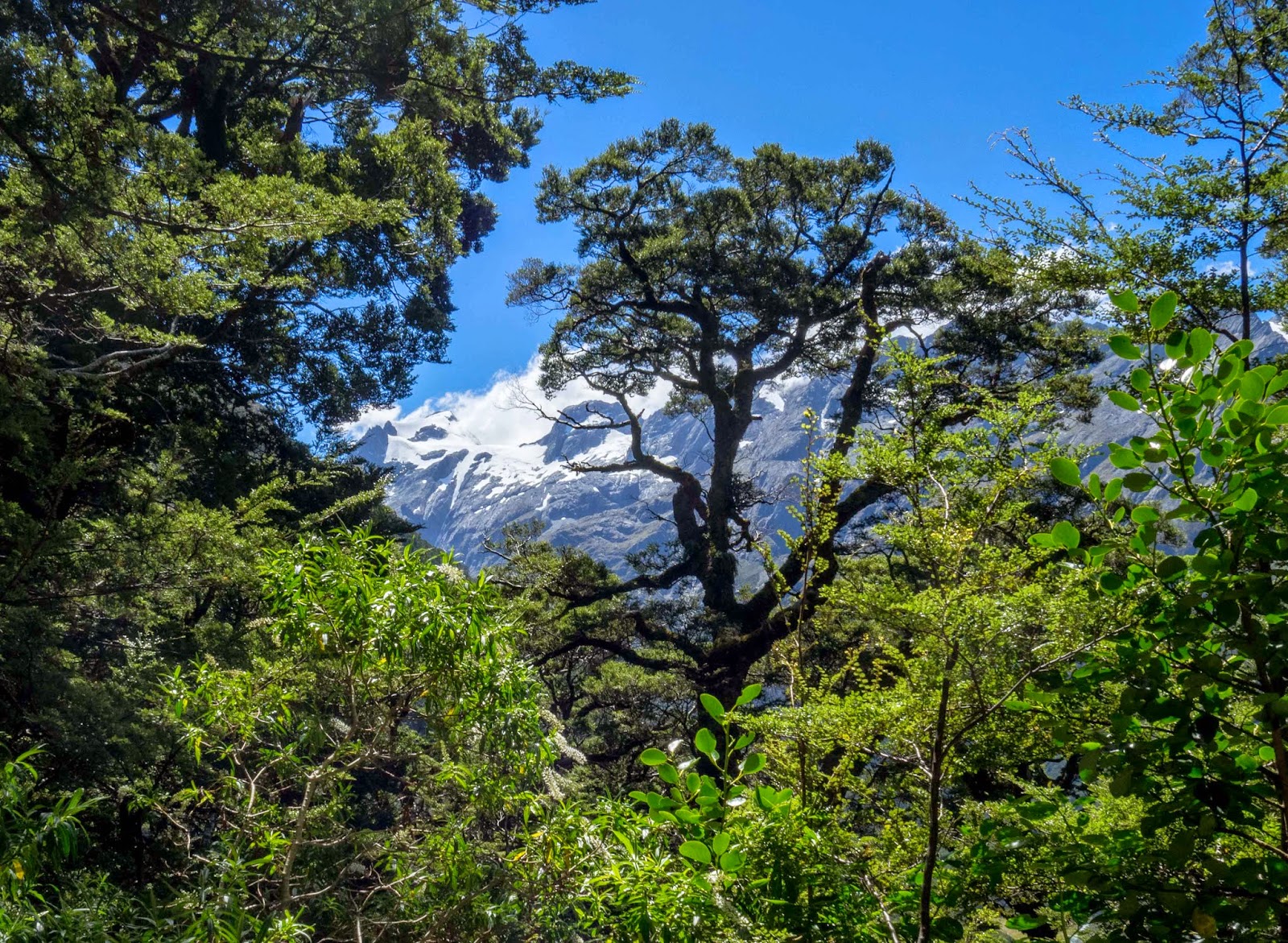 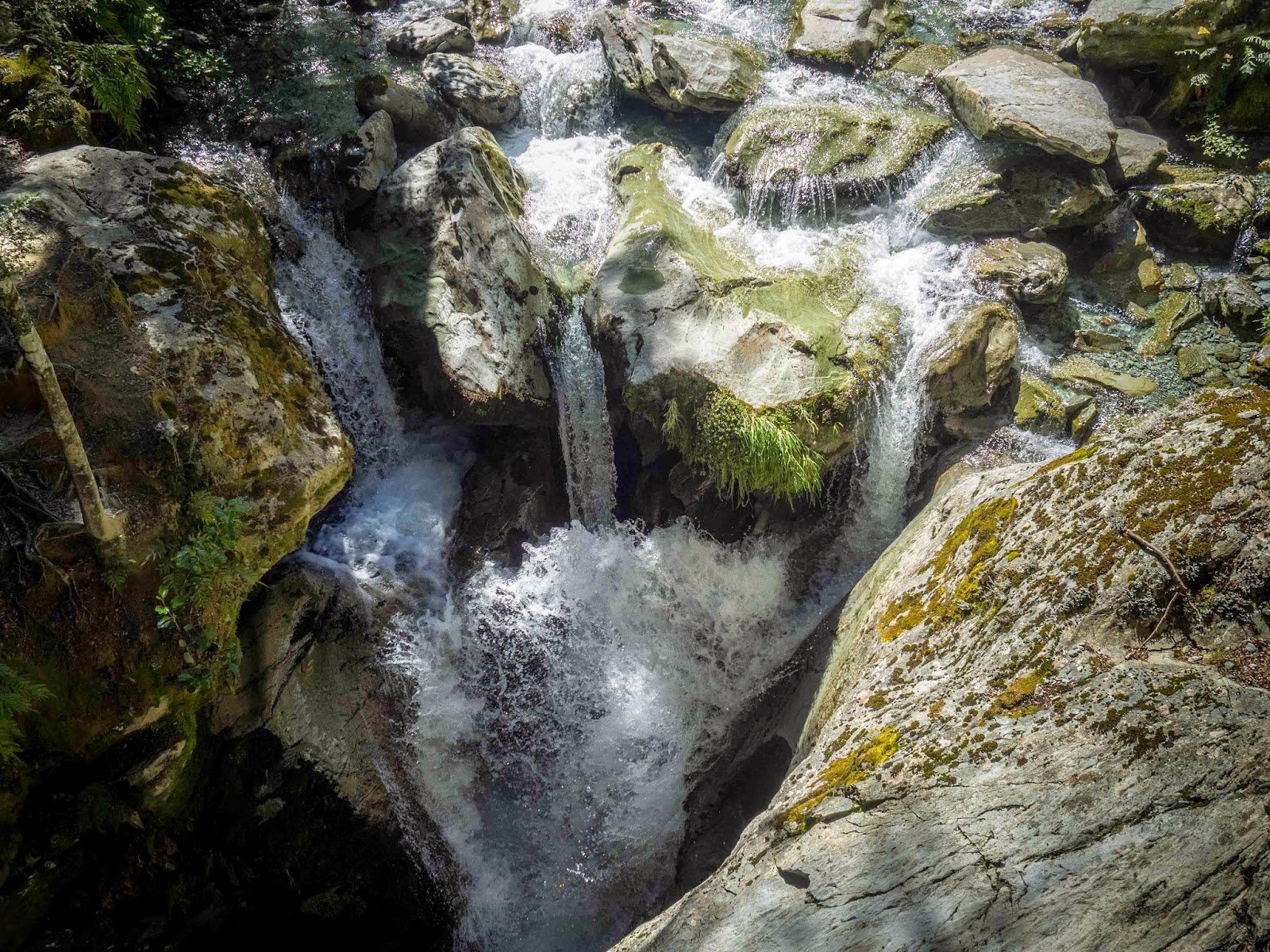 Rich is a "Lord of the Rings" fan, and Laura has a couple of horses back home, so we decided to hire some trusty steeds and head into the L-o-t-R country above Glenorchy.  The riding was fun, and the day was beautiful indeed.....not a bad way to travel!

Before leaving Queenstown, we stopped for a pit stop at Arrowtown, an early 1800's gold rush mining town.  While much has been reconstructed as it once was, it's pretty touristy.  The most interesting part was the Chinese camp, where a group of Chinese gold miners who were here seeking their fortunes lived isolated from the other miners. 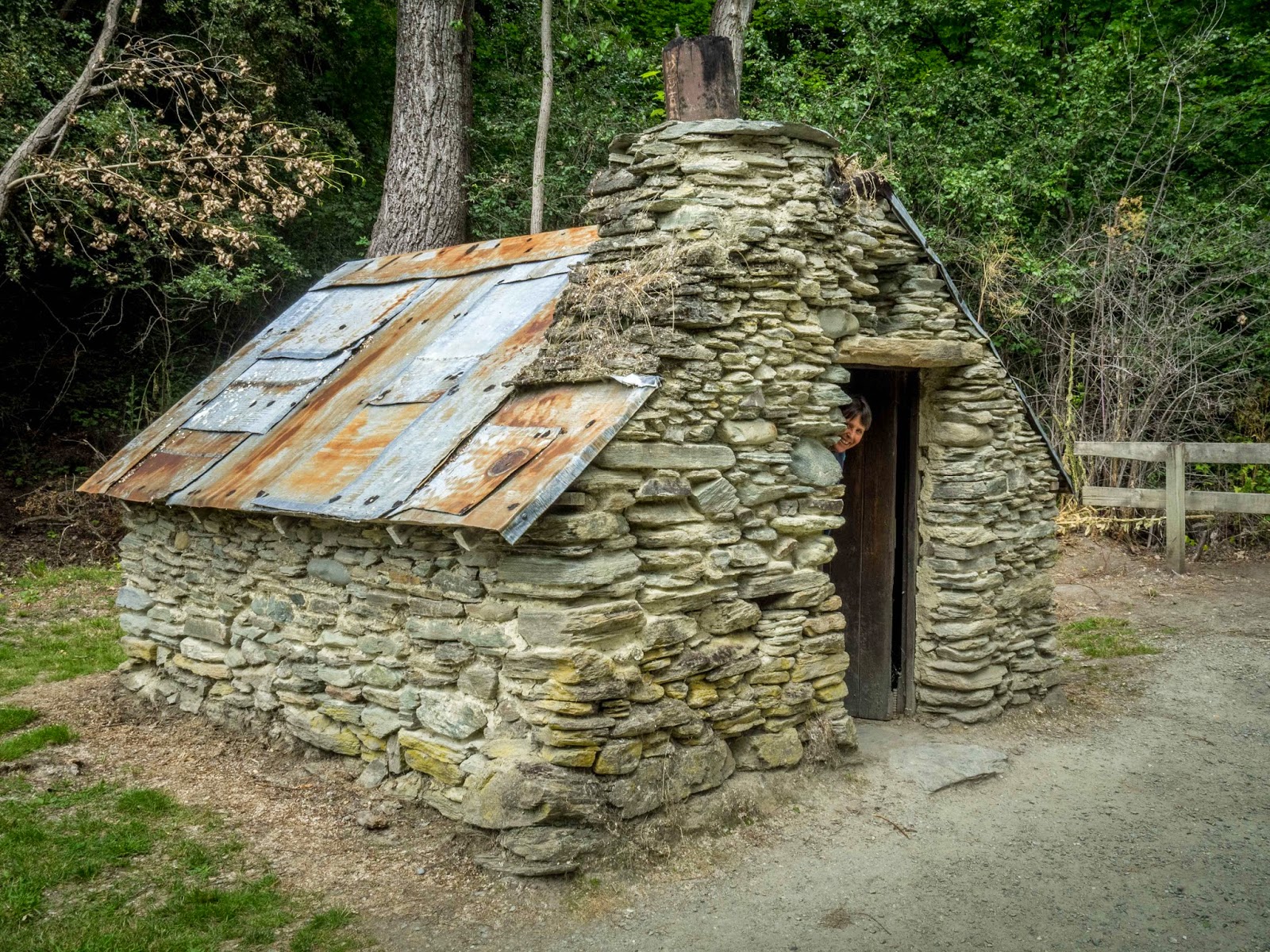 Next up was an exploration of the Lake Wanaka area, about an hour away from Queenstown.  Also surrounded by mountains, the region has some fantastic tramping.  Hard to go wrong on a beautiful sunny day!  Even the drive over was beautiful.

First up was a hike up to the Rob Roy glacier.  A great tramp with heaps of "bang for the buck".  Highly recommended! 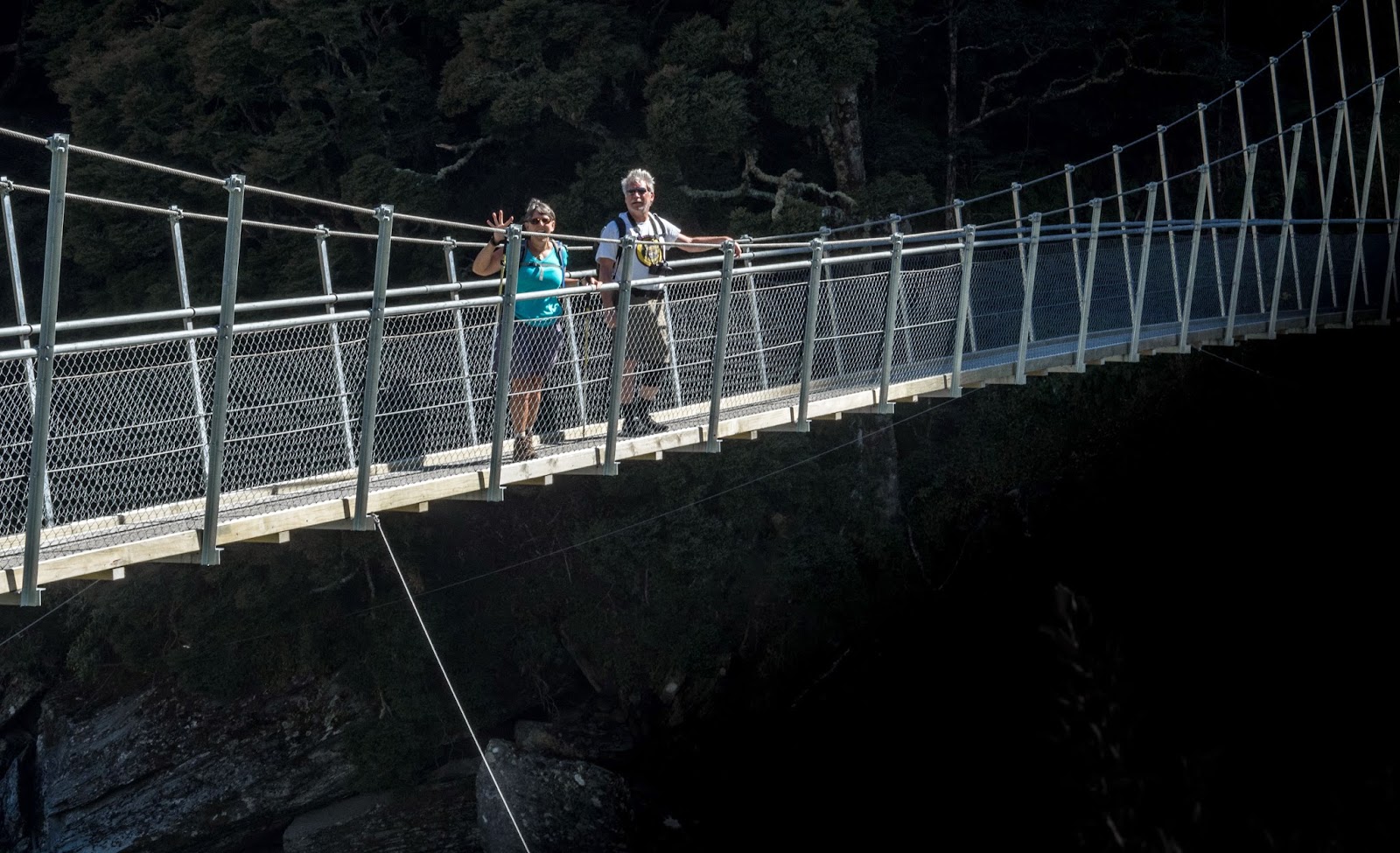 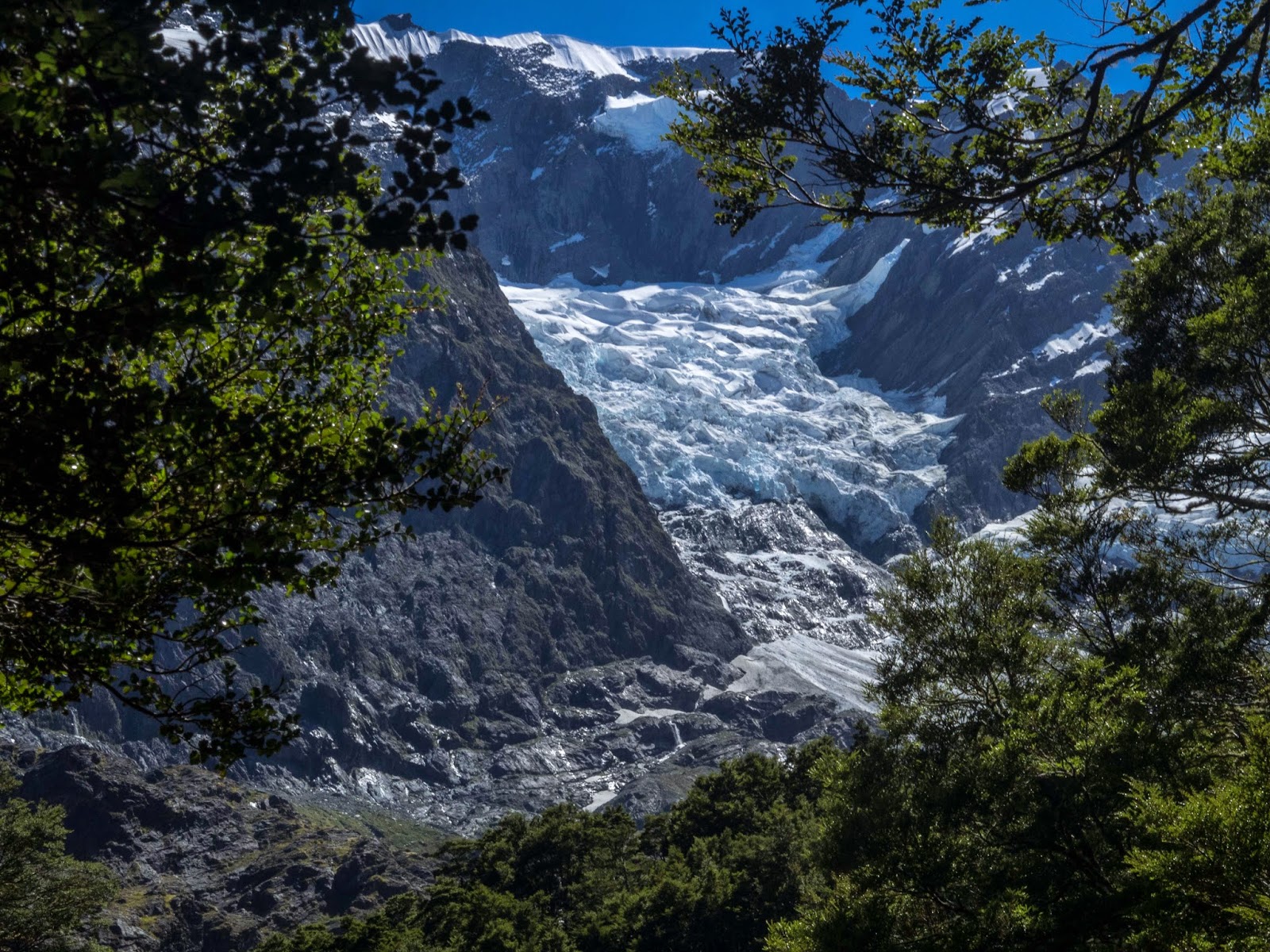 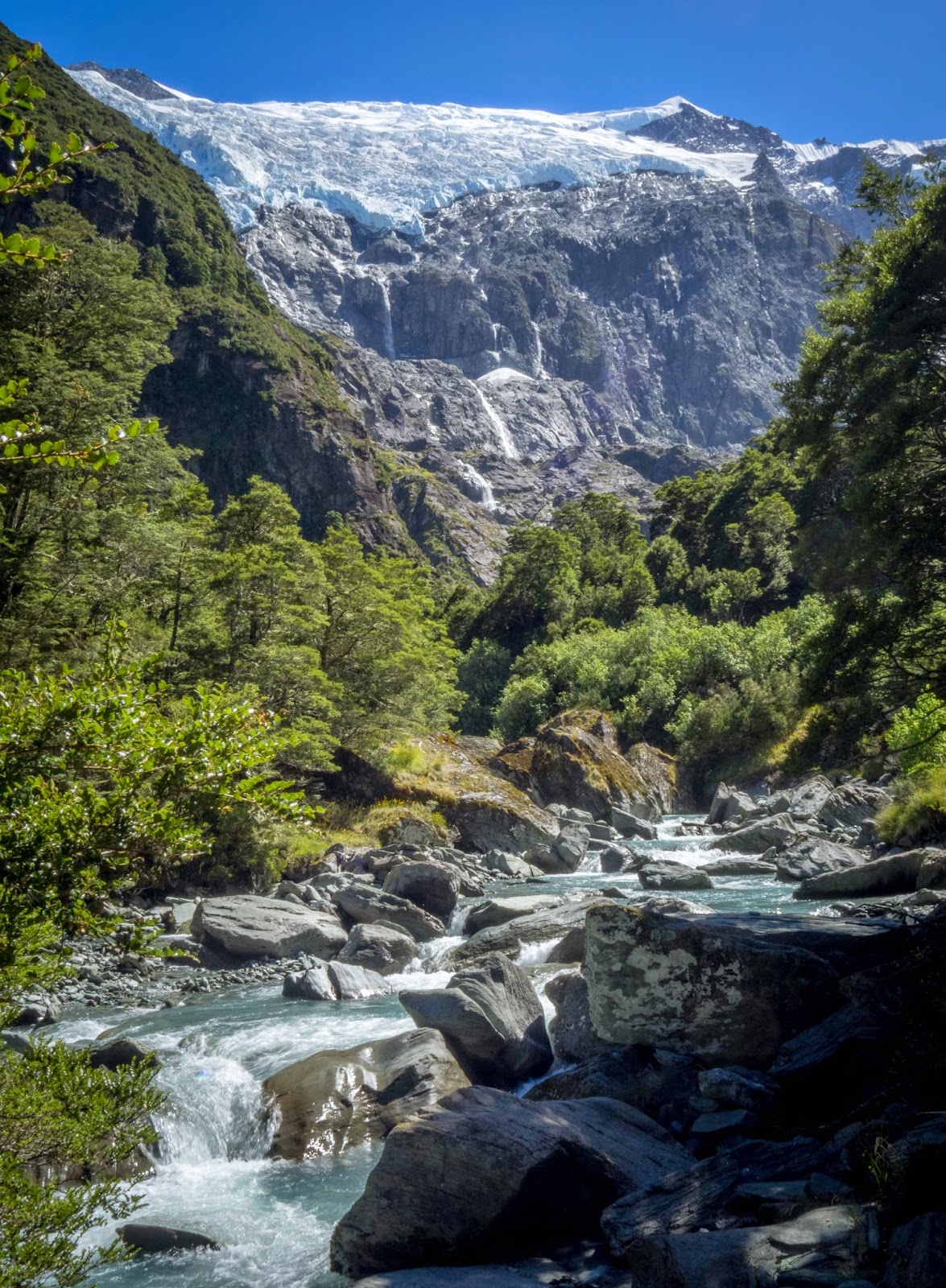 After leaving Rich and Laura to head back up toward Christchurch, we pointed Dirt Bravo toward Fjordland, home of the famous Milford and Doubtful Sounds.  Like most of the area, the drive was beautiful, making its winding way from the sheep and cattle stations around Lake Te Anau up to the mountains of the "Southern Alps". 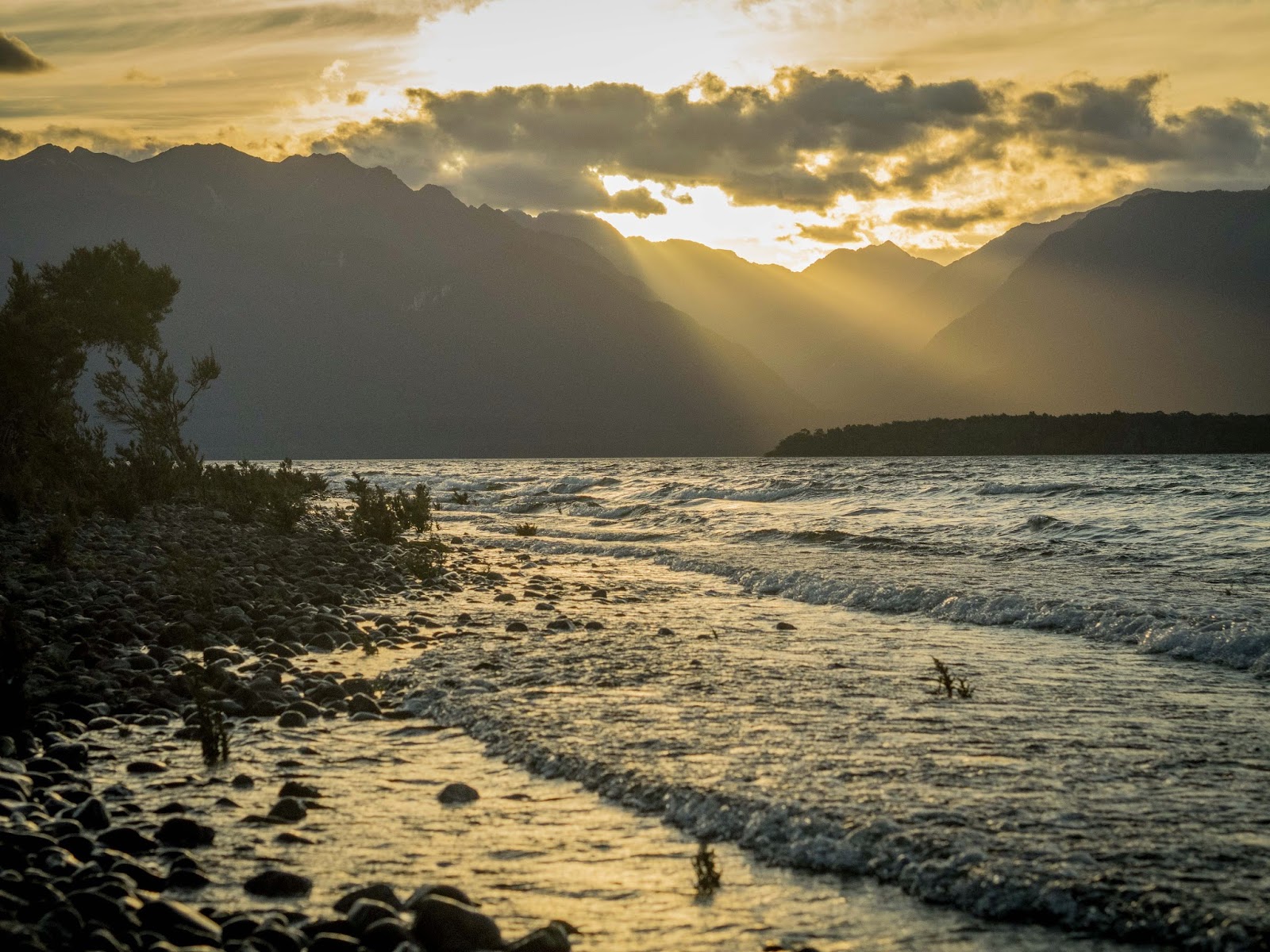 We did a great tramp up to Key Summit, which had terrific views into the Milford Sound area which was to follow.  Coincidentally the hike started on the other end of the Routeburn Track, which we'd hiked at the other end the week before!!! 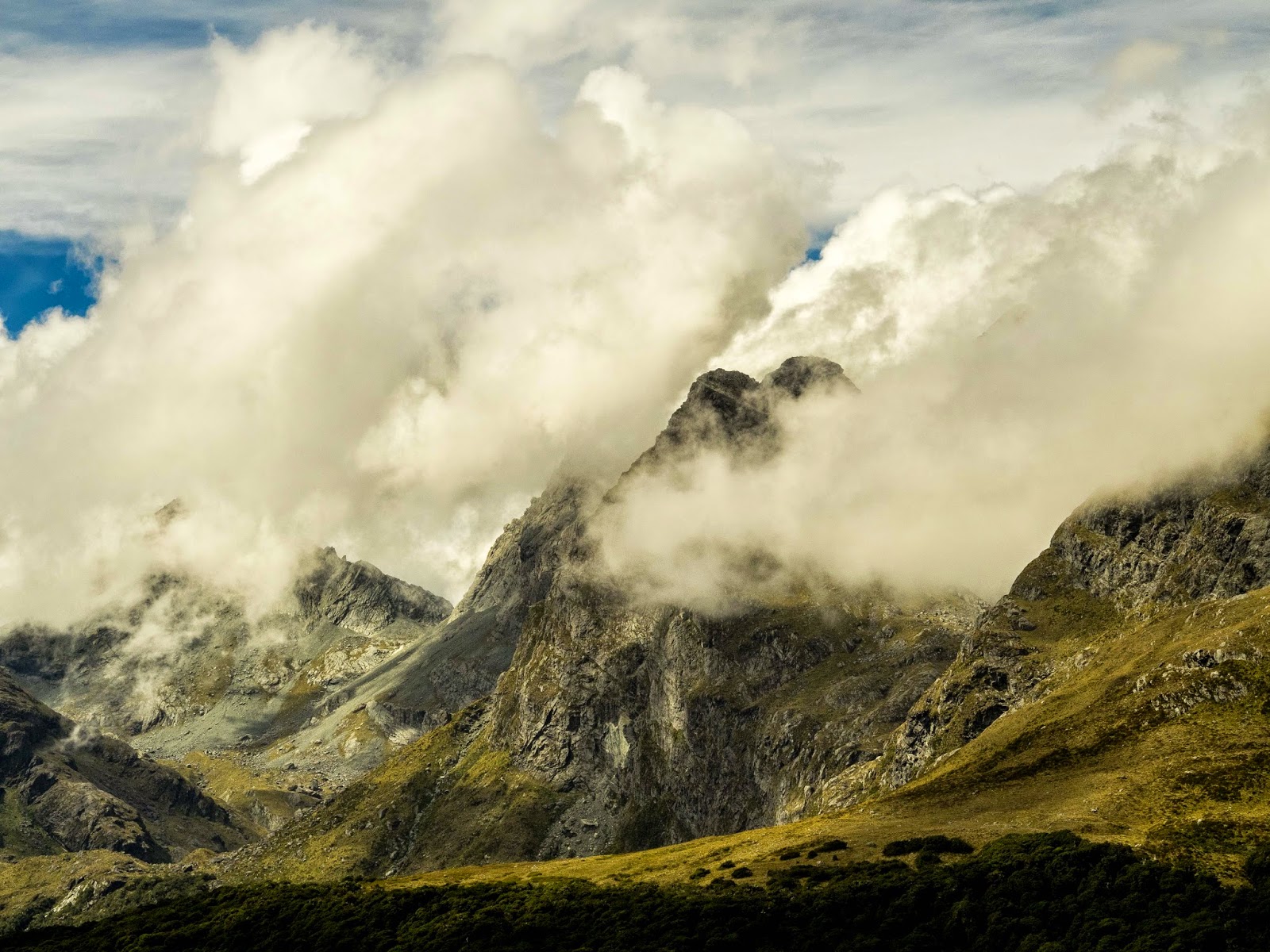 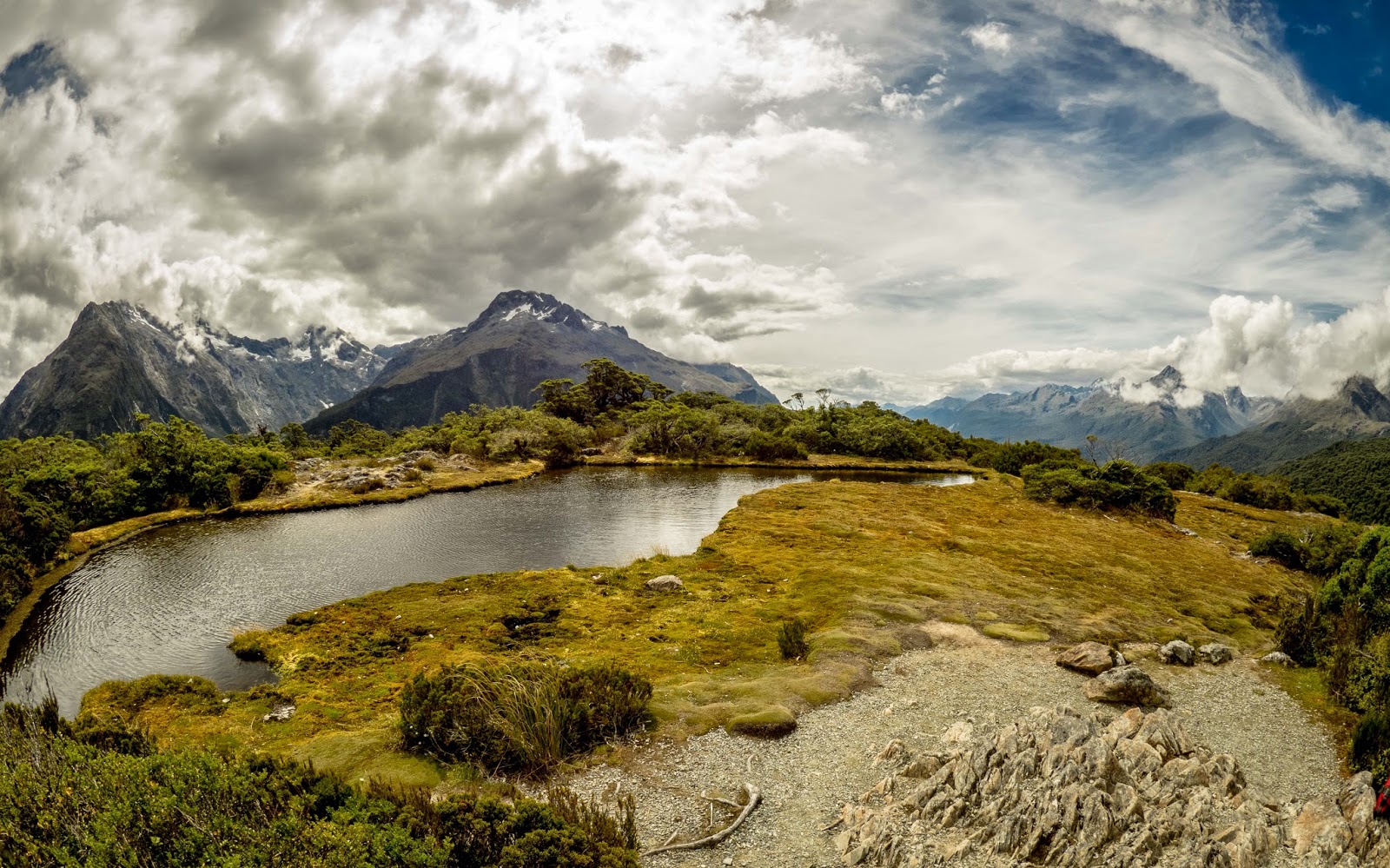 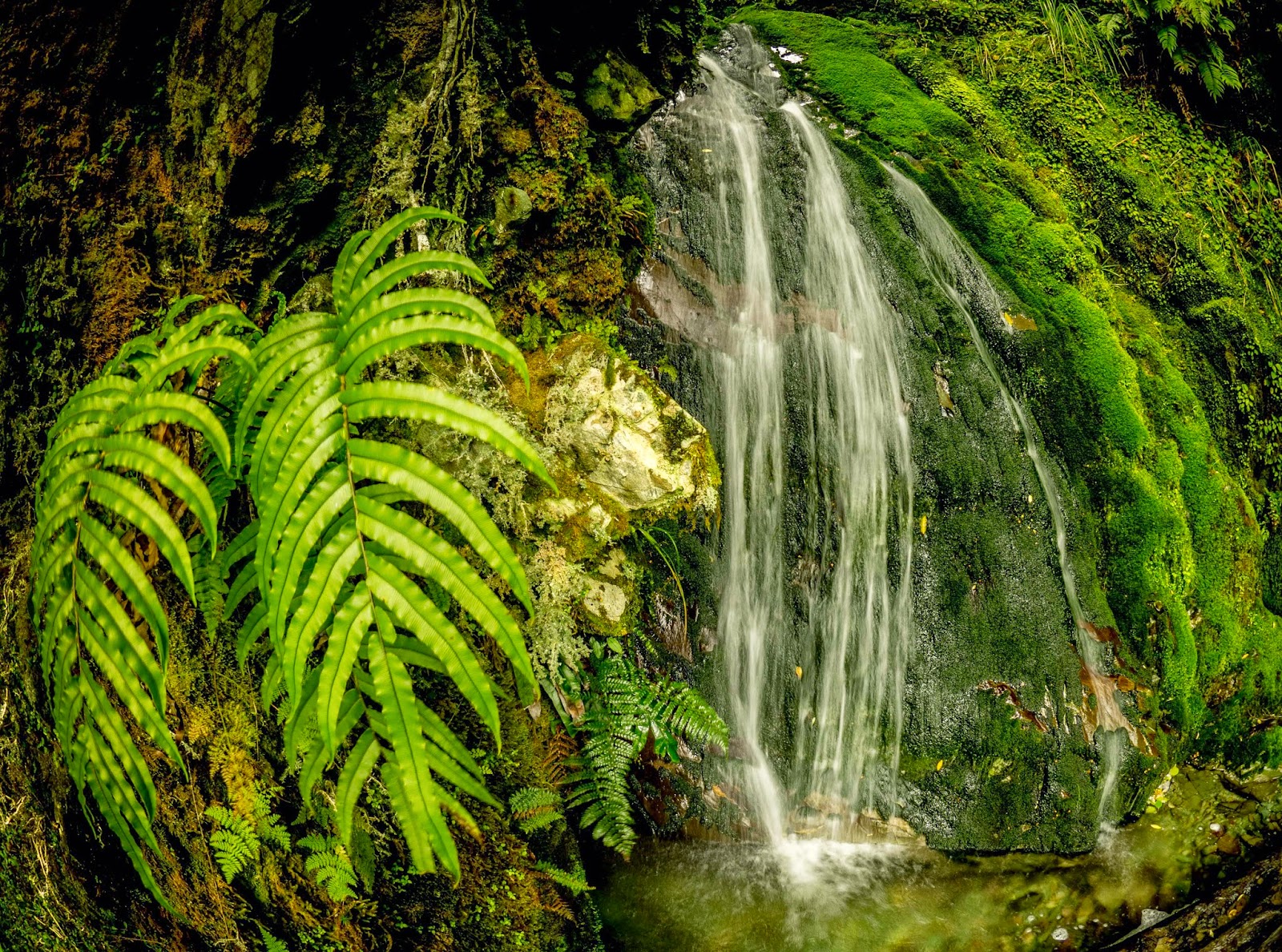 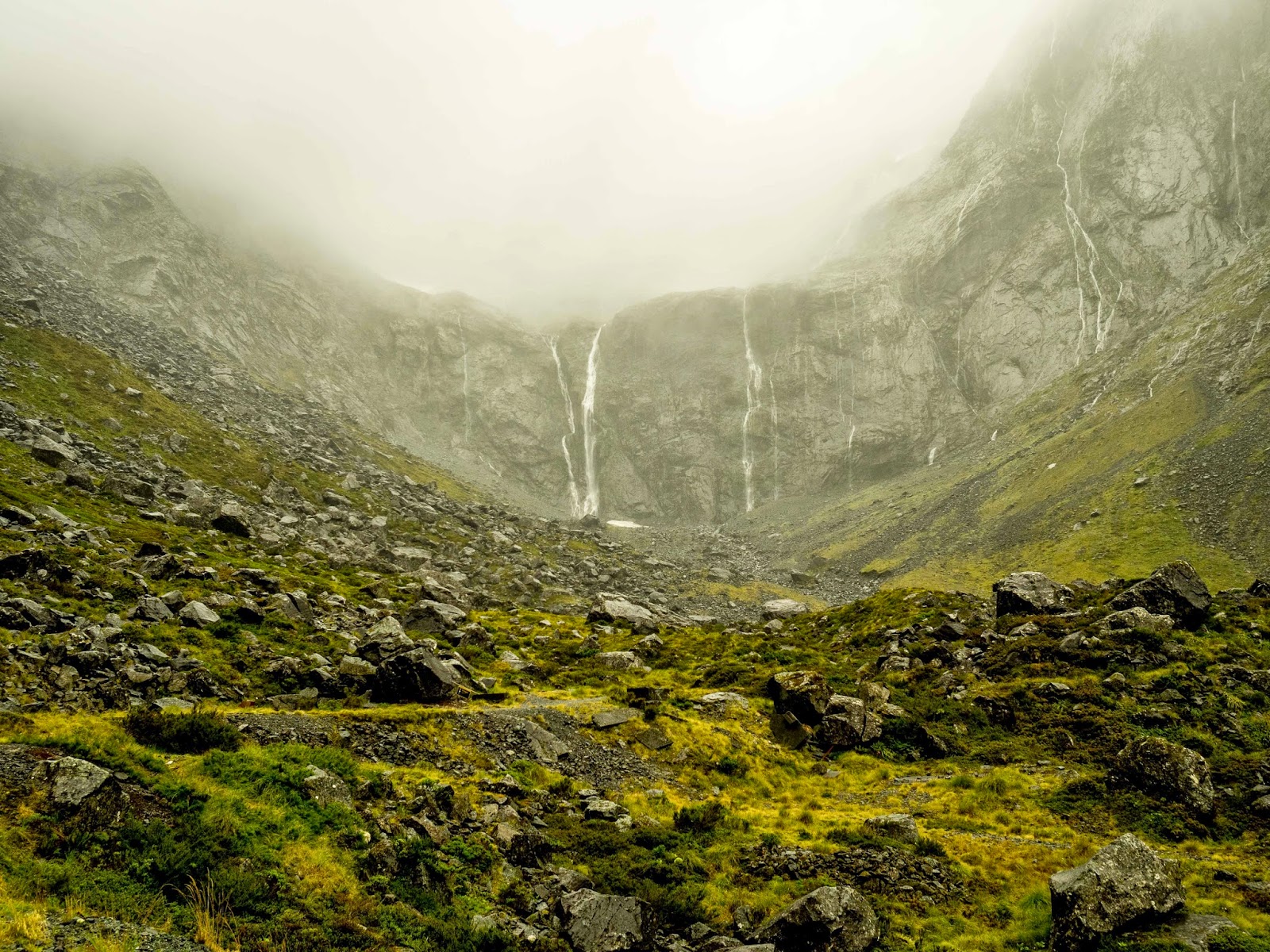 Milford Sound is a rainforest region.  They get over 7 meters (almost 280 inches!!)  of rain each year.  "Rainy" Seattle gets about 36 inches!!!   When raining, the walls above the road are alive with waterfalls everywhere!

We'll leave off here, and save the Milford Sound explorations for the next post.....stay tuned!  Until then, cheers, mates, from Queenstown!  The sun just came out...time for another tramp !!!! 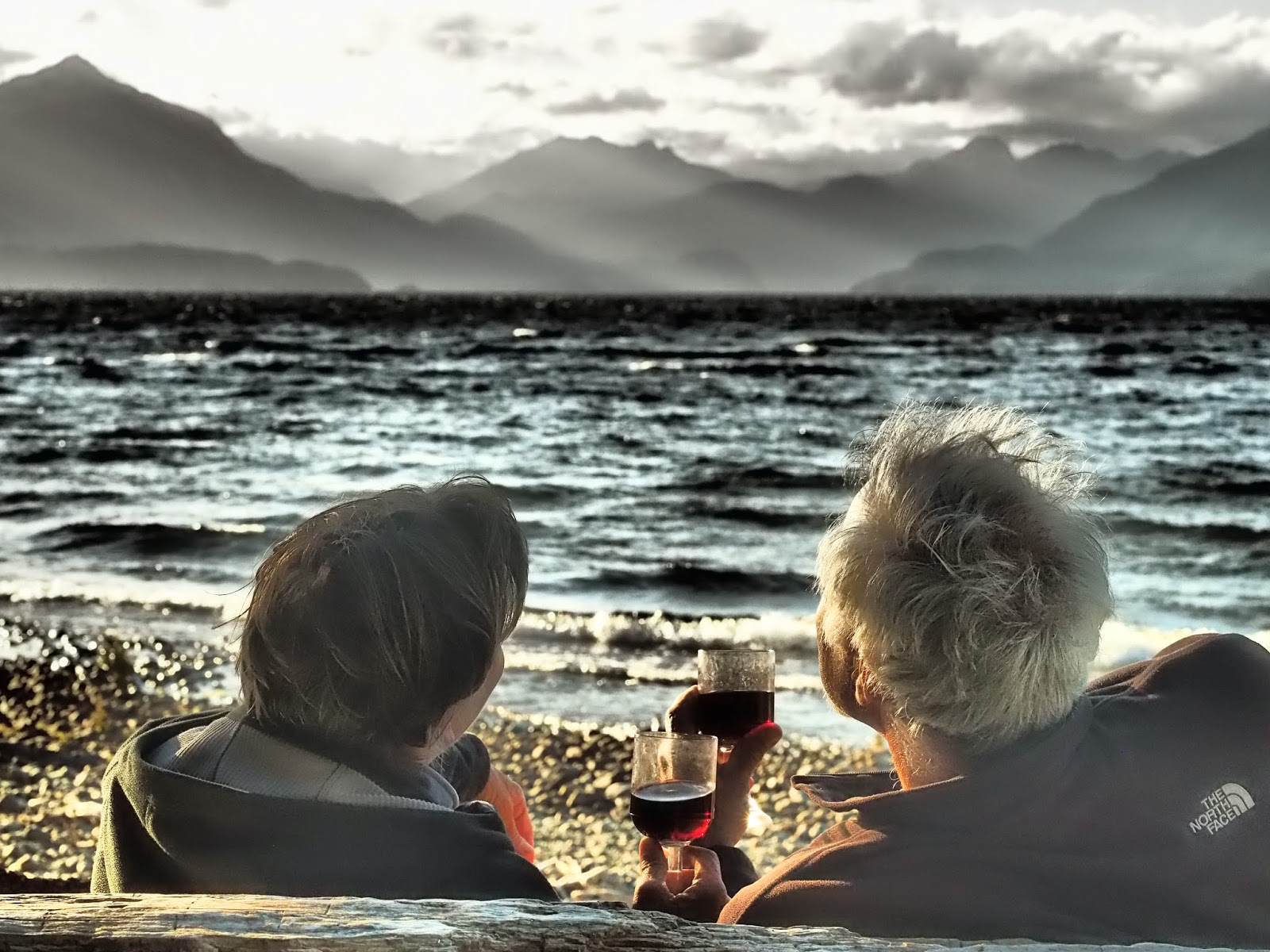 A kiwi shipwright friend always used to remind us of this when boat projects seemed a bit overwhelming.  I suppose the corollary might be, "If man f*cks it up, man HAS to fix it"

We've been hauled out for almost 3 weeks now.  Many projects underway, many more yet to begin.  None are yet completed!!!  Or so it seems.....

The first of the majors is to fix the "coral bite" we received in the Fulaga pass last season in Fiji.  ( see http://svbravo.blogspot.co.nz/2014/08/fulaga-fijia-magical-experience-part-1.html  for the recount of how it happened)

After the incident on the reef, we dove the boat and decided that the damage was "just a flesh wound", not structural, and that the most sensible approach was to continue our cruising season and worry about the repairs when we arrived back in New Zealand.


Well we're back, and it's time to roll up our sleeves and begin.

As you can see from the photos, the trailing edge of the keel took the worst hit, when we backed off the reef.

A few inches of shattered glass needs to be removed.  We've decided to do most of the grinding before we leave to travel to New Zealand's south island, to be sure all is nice and dry when we return to continue the repairs.


BRAVO's keel is lead encapsulated in fiberglass, and happily there is no structural damage to the boat itself.  We were also concerned that water might have migrated beneath the epoxy barrier coat, but some exploratory holes shows all along the bottom edge of the keel appears dry.


BONUS QUESTION:  What is the item pictured below? 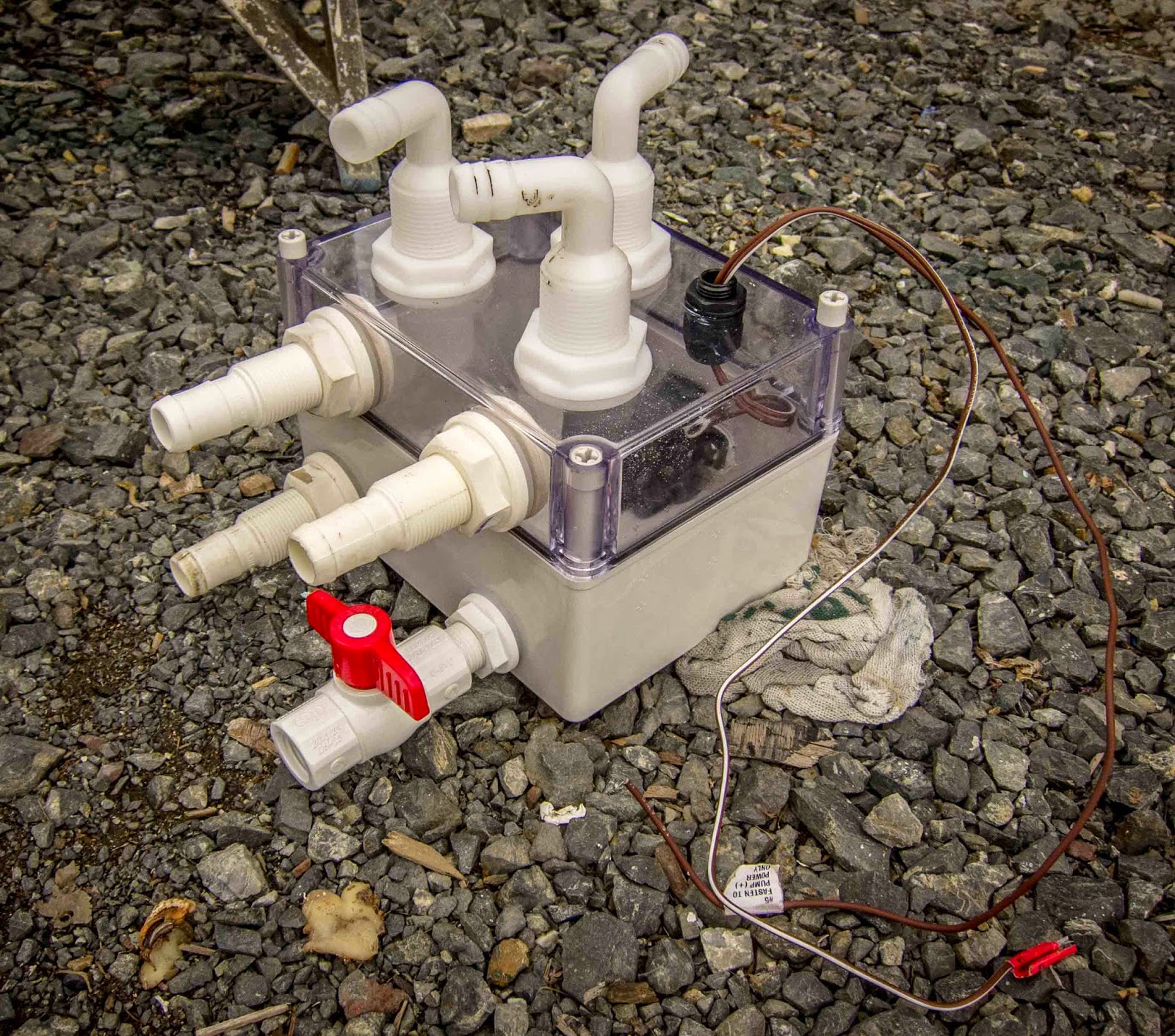 If you guessed a gizmo from a passing Russian spaceship you were.........

We decided to replace our 30 year old shower / head sink sump, as it was hiding all sorts of sludge, an old wrench, cable ties, rusty hose clamps, and other treasures of the bilge inaccessibly beneath, which were clogging our bilge pumps and switches.  Rather than pay $500 for a new Whale box, we made up this one for less than $100.  Even has a few extra hose barbs.  Has a switch inside which turns on a remote pump when water enters the box.  Looks a bit weird, but hey, it lives in the bilge!!!

Cindi's been hard at work on new mozzie screens for BRAVO.  We'll be heading into malaria country next season, and mozzies were getting under the old screens with their little top hats on.  The new screens are sweet as!!!  She even sewed up a set of magnetic ones for Dirt Bravo, our camper van.

And speaking of D.B........here's the latest kit for our little land yacht, will make the interior a bit roomier!  A fold-up bumper shelf thingie, holds a cooler/chilly bin, big plastic tote, and whatever else we strap on.  Had to weld up a trailer hitch, but should work ok.  We're low riding now!!! 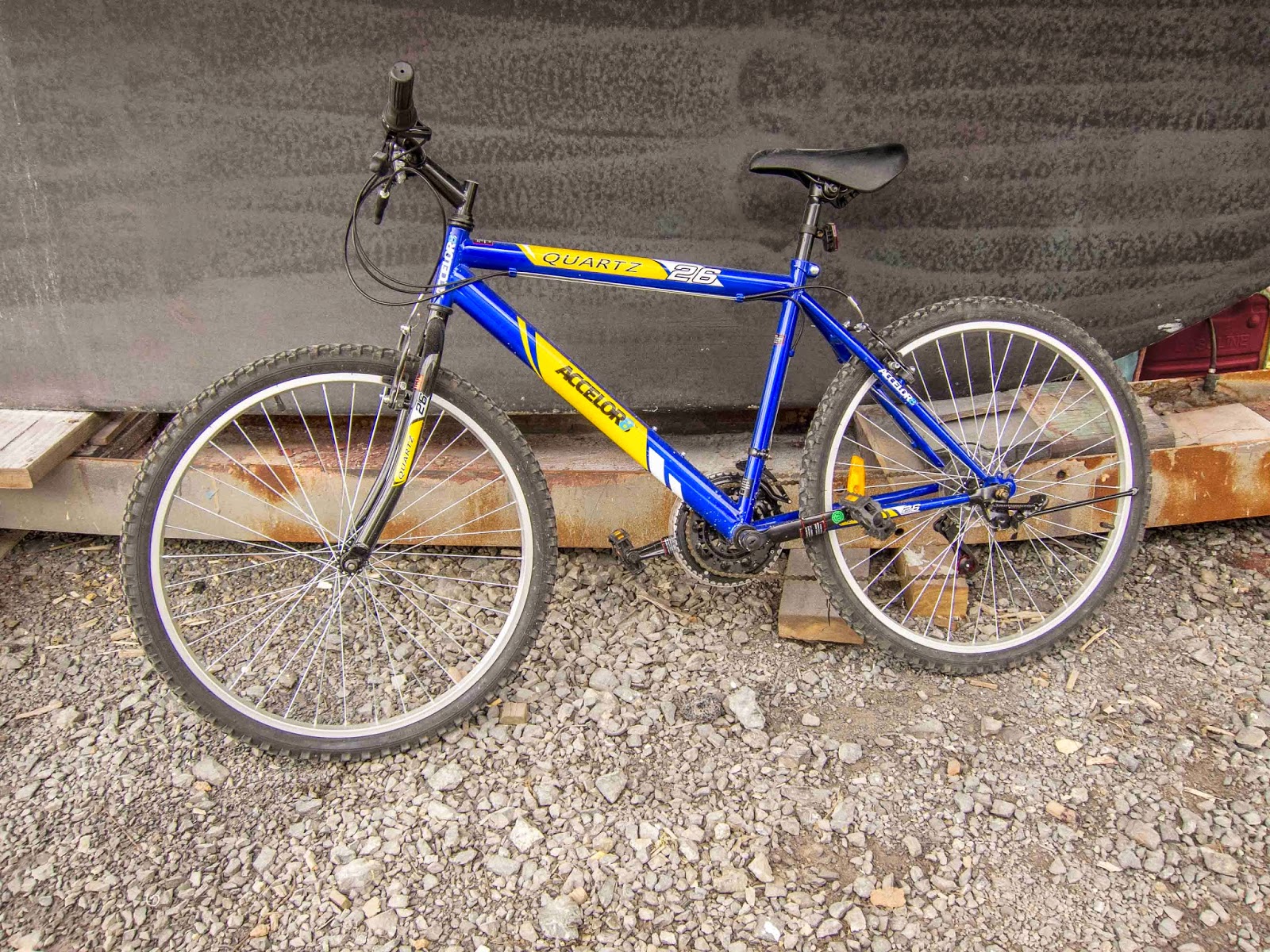 Hey, the BRAVO stable has a new steed.....a brand spanking new Chinese P.O.S. bicycle!!!  We were looking for a cheap transportation old beater bike to run errands from the boat yard, but they were all way over priced, hard to find anything for under $100.  So we found a NEW beater instead, at a big box store.  $76 NZD  ($55 USD) before tax.  18 speeds.......just over 4 bucks / speed !!!! (though only about 3 of them actually work.......).  We really hate to support the disposable consumer import mentality, but this was hard to pass up.....will give it to a needy kid or the local hospice 2nd hand shop when we leave.  Sure a far cry from our race bikes of the old days!!! 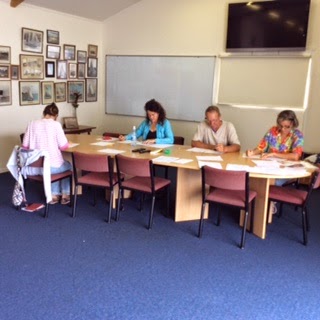 Adam continued to give back to his geek lifestyle yesterday, when he served as a Volunteer Examiner (VE) to give ham radio exams to cruisers.  3 passed, and will now have US ham radio call signs, and be able to use the radios on their boats for email, weather, nets, and general chit chat.  Sponsored by the Seven Seas Cruising Association, we'll do another session in April.

That's all the news for now.  On Wednesday we'll be packing up Dirt Bravo and heading down to the south island for 6 weeks of adventures.....stay tuned!

And in the meantime, GO SEAHAWKS in tomorrows Superbowl!!!!!
Posted by Adam at 5:17 PM 2 comments: