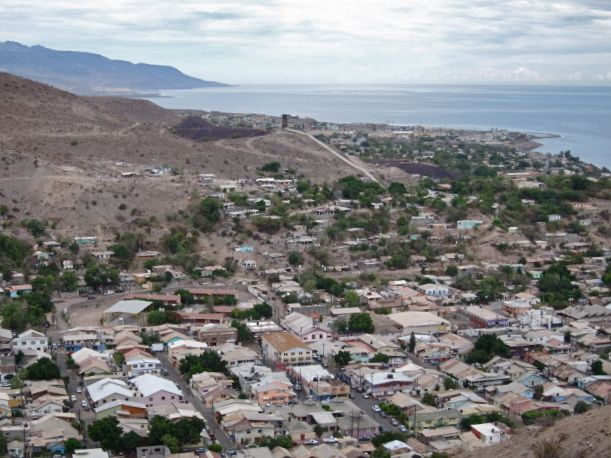 We're now in the copper mining town of Santa Rosalia, roughly midway up the Sea of Cortez.  The French operated a copper mine here from the late 1800's until the mid 1900's.  When the ore was running dry, they turned it back over to the Mexicans....(a typical scenario).  Although the mine has been inactive for many years, evidence is all around, including French style residential buildings, mine structures, and even a metal church designed by Gustave Eiffel (of Eiffel Tower and Statue of Liberty fame).  Interesting town, if a bit down at the corners without a major source of revenue since the mine shut down.  An effort is underway to get it reopened by 2013, using newer technologies to extract additional copper from the ore.  Fishing by the local panga fleet is active, but tourism has not taken hold.


There are two small marinas here.  We're staying at one for a few days, after anchoring out waiting for a slip to finally open.  The marina has an AIR CONDITIONED room to hang out in, as well as a tiny pool.  Since we haven't been in a marina since April, we're enjoying using the facilities to clean the boat with fresh water, use unlimited electricity, and take care of lots of misc projects in the AIR CONDITIONED room!!!  Cool!!! 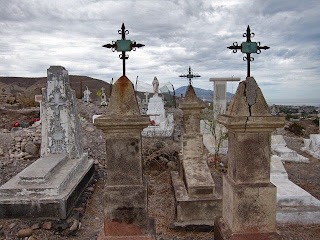 Took a hike with other Seattle cruisers Paul and Judy from s/v Grace up to the large cemetery above the town.  Picking a dark, overcast day made for a cool hiking day, and gave a bit of gothic overtone to our "day of the dead".  It sounds like safety may have been a bit lax in the mine, as the story is that over 24,000 died working there in the 100 years of operation.  It was an interesting hike, and the views of the town below were great.  The graves varied from small piles of stones to fairly elaborate.  One in particular really showed a sense of creativity and "can do" attitude which we've become so fond of in Mexico.  The cemetery is completely dry, on top of the mesa overlooking town.  Seems someone wanted a garden oasis palapa (thatched hut) design motif, hard to accomplish without water.  So they cut the tank off of the back of a water truck, and partially buried it on the hill above the grave.  A hose led to the garden below, and BINGO!, it's an irrigated garden gravesite!!!

Reminds me of another "can do" sight we saw a few weeks ago in Agua Verde.  While hiking in the hills, we came across a cow hanging from a big tree branch, under the only tree in the area.  The cow was suspended by a sling under her belly, and her rear legs were slightly lifted off the ground with a chain engine hoist.  She was free to munch hay at the head end, and her udders were hanging down, ready for milking.  As we scratched our heads, trying to figure out what was going on, we realized that one of her rear legs was splinted.  Seems like she'd broken a leg, and they kept her hanging under the tree until it healed!!!!!  Wasn't her time to be a carne asada taco!!!  Ah......Mexico, ya gotta love it!!! 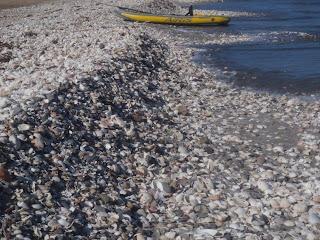 But I digress.....Since leaving Geary's beachside party on July 4th, we've worked our way slowly here, stopping at a couple of interesting anchorages en route...Punta Chivato and Isla San Marcos.  Punta Chivato had a great shell beach...miles of amazing shells to comb through.  And good snorkeling, though we saw several venomous stone fish....they're so well camoflaged that it's really the ones, likely many, that we don't see that are the worry!!! 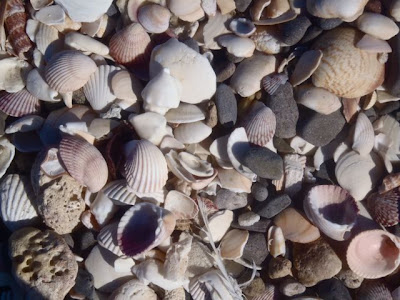 Isla San Marcos was another mining story, of a different sort.  The open pit gypsum mine a mile or two from the anchorage is still operational, and when the wind is wrong, a cloud of airborne gypsum dust wafts over the boat.  But the anchorage was very protective in the strong northerly wind we were having, so we spent a few days snorkeling and hiking into the company town on the island.

Since this is the first time we've had internet for a while, we'll get you caught up on some of the photos getting us up to the present. 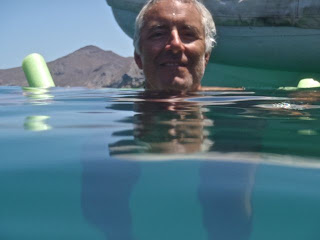 And finally, for those of you who have read this far, here is a little bonus wildlife video, shot off the boat a few days ago.....have fun!!
Posted by Adam at 9:12 AM 1 comment:

Do any of you remember the movie "Body Heat"? Seems like it was 70's or 80's...William Hurt, Kathleen Turner. Quite steamy. In the movie, Miami was going through a heat wave. Was on everyone's mind, mostly what they talked about. And everyone was constantly glistening/dripping with sweat.

Well, we've arrived to summer in the central Sea of Cortez, and the weather has become a major topic of conversation. Unlike the winter months that were spent down south on the mainland, where the weather couldn't have been more benign or pleasant, we've entered a bit of a new reality. (And with the temps in the mid/upper 90's, it's not even THAT hot, according to the veterans). All boats become nearly obsessed with devising ways to provide shade. Ranging from simple blue tarps hung over the boom, to elaborate canvas/zipper/snap/velcro contraptions, the goal is the same...provide shade from the intense desert sun. (Our system is a work in progress, and falls somewhere between these two categories). And we're constantly dripping wet. Fans are our new best friends, even portable ones outside in the cockpit. We have at least two of our 8 cabin fans running constantly 24/7 whenever we're aboard. And it's really hard to drink enough water to keep hydrated, a constant effort.

Refrigeration takes on a whole new dimension as well in the heat. The system is working very hard these days to keep us supplied with ice and cold beer. (as well as keep our freshly caught dorado ready for the pan!!) It's kind of a triple whammy: First, we typically have been self sustaining, energy wise, with our solar panels. They have been providing enough energy to run the boat day and night, whether under sail or at anchor. Unfortunately solar panels become less efficient as they get hotter. They turn out fewer amp/hours per day. That's whammy #1. Second is that the air temp is now typically in the upper 90's all day, cooling down to the mid 80's at night. So there's just a lot more cooling needed to keep the fridge and freezer at the proper temp. And whammy #3 is the water temp. Our system is cooled with sea water pumped into a loop to carry off the waste heat of the refrigeration cycle. The sea temp has now risen to the mid 80's, making for great swimming (even a bit too warm), and excellent dorado fishing. But it's much less efficient as a coolant for the refer system. We've installed a couple of additional fans in the equipment spaces to provide extra cooling to the refer system and the solar charger, which has been running it's internal fan constantly. All this means that the system is working very hard...so far so good, but we need to run our generator for an hour or so every morning to give a bit of extra boost to the batteries.

The good side to the heat, of course, is that we typically spend a couple of hours daily in the water. Although it's sort of like a warm bath, it nonetheless does provide some relief from the heat. And gives everyone time to play with their "floaty toys", ranging from simple "noodles" to fancy rafts, chairs with drink holders, and a huge assortment of inflatable critters. All good fun!!!

And it's not just the heat. Wind has become a much greater topic of concern as well. Naturally we all follow the tropical depressions as they develop down in southern Mexico, as they have the potential to develop into hurricanes as has happened twice already this season. Happily those two headed out toward Socorro Island before dissipating. But the convection cells born by the hot temperatures on land and warming water, as well as the heat and barometer pressures in the US southwest have dramatic effects on our winds on a more localized basis. Starting on July 1, a nightly Chubasco report is broadcast via email, giving us the likelihood of a Chubasco wind hitting us that night. The Chubasco's can be rather nasty, coming up very suddenly in the middle of the night and packing winds with potential speeds up to just shy of hurricanes. Thunder, lightening, and hard rain can also be part of this rascal's arsenal. We have not yet experienced any down here in the central Sea (we're anchored in the Bay of Conception in El Burro Cove, approx 14 miles south of Mulege). But a few nights ago one hit in the Bahia de Los Angeles, where we'll be heading soon, and it had reported winds of 57 knots, over 60 mph. You may have heard about a Mexican tour boat flipping near San Felipe in the northern Sea during a Chubasco event a few days ago. Several folks are still missing from this disaster, and this was a big, commercial vessel, who was apparently caught out where/when he shouldn't have been.

This means that part of our daily routine now is putting up all of our sun shading every morning when we wake, and taking it all down as the sun sets. To keep the tents and tarps up at night would be a sure invitation that we'd be visited by a Chubasco!!! And we're thrilled that we invested in a new, oversized 90 lb Rocna anchor before we left Seattle.

For the 4th of July we attended a tremendous gathering of yachties and others at the beach palapa of Geary, our local weather guru. A yearly event, Geary provides the tents and 300 hot dogs, while all of the 30 to 40 boats anchored out bring pot luck dishes. It was a great time to meet up with old friends and make new ones, as we all get prepared to weather the coming summer months, playing in the northern Sea of Cortez.

Sorry about the lack of pictures...access to internet service will become more and more sporadic throughout the summer in the Sea.