Back in Time.....crossing the Nullarbor

We left Esperance and continued east, heading for the vast expanse of emptiness otherwise known as the Nullarbor Plains.  The region encompasses over 200,000 sq. km. (77,000 sq. miles).  But like most "blank slate" desert type landscapes, the Nullarbor offered some fascinating bits, including a great deal of Australian history from the days when rugged characters did their best to carve a life in this inhospitable region of the country.


But before hitting the Nullarbor, we headed over to Cape La Grande National Park on the coast.  Known for it's beaches, some of the best in Australia, as well as the friendly kangaroos, we had to check it out.  And it didn't disappoint!  Though the weather was a bit stormy at first, the beaches were indeed spectacular, and the roos, well, check 'em out..... 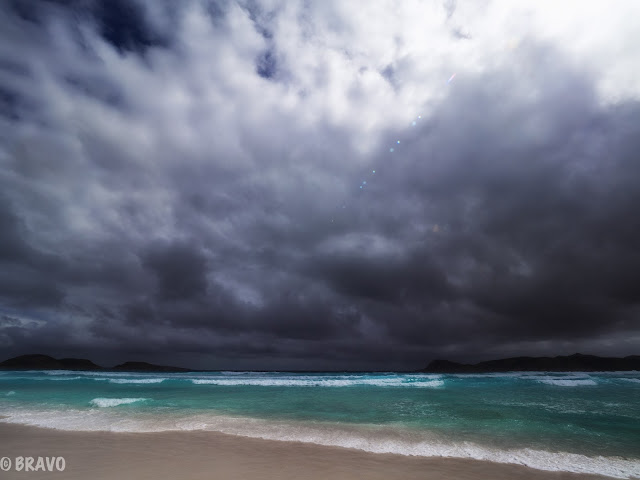 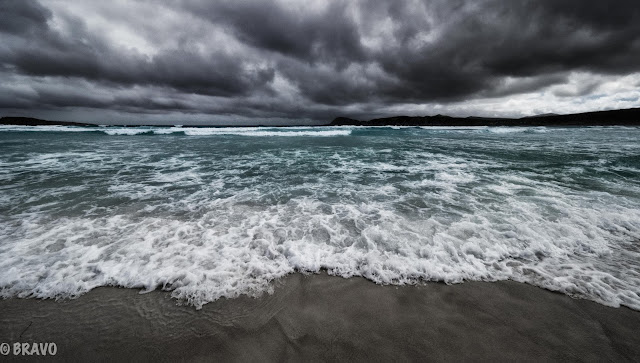 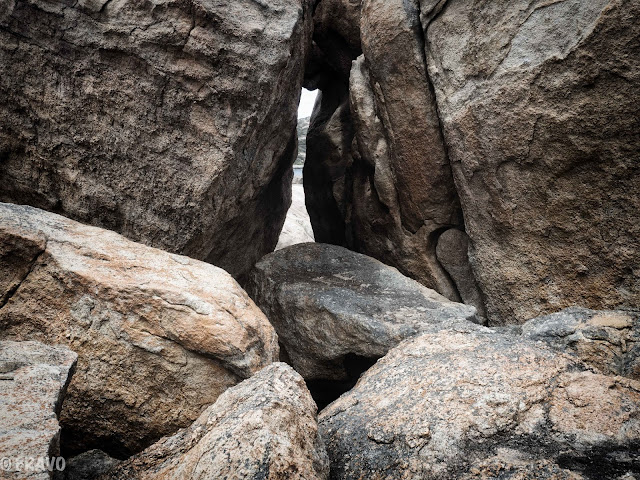 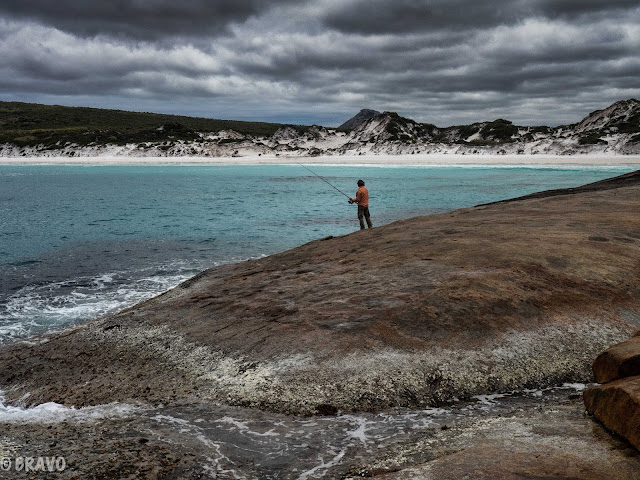 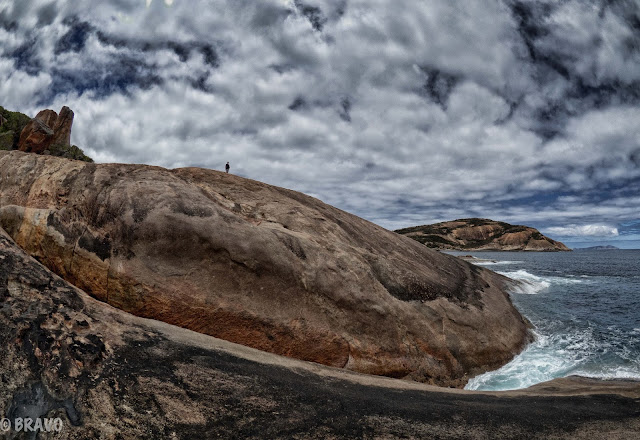 The sun finally appeared, and the beach became a roo side show.  These rascals obviously had been interacting with two legged beach goers for a long time.  And the mostly European crowd loved it! 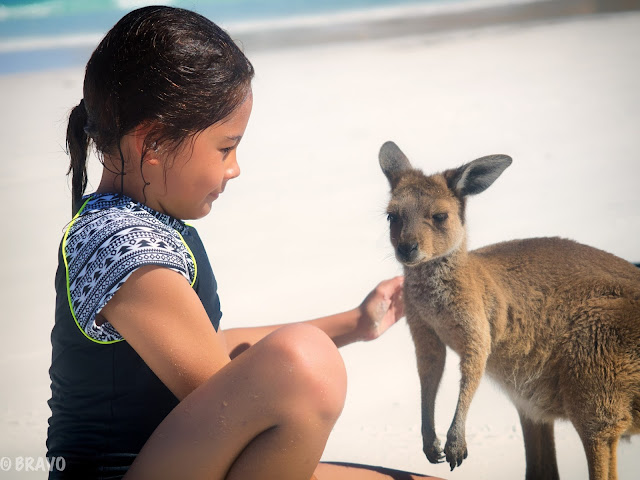 These cheeky characters found a lunch, complete with tasty bananas, left unguarded by some unwary swimmers.  Left quite a few little round business cards to let the swimmers know who had been there!!! 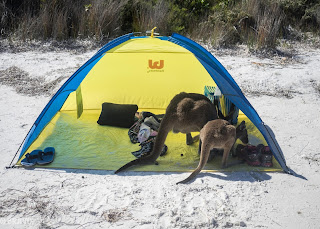 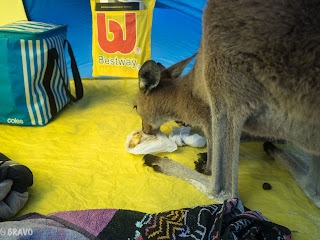 After soaking up some rays, hiking, and camping in the park for a few days we headed off for the Nullarbor.  But first, a quick hike up Frenchman's Peak for terrific views of the area. 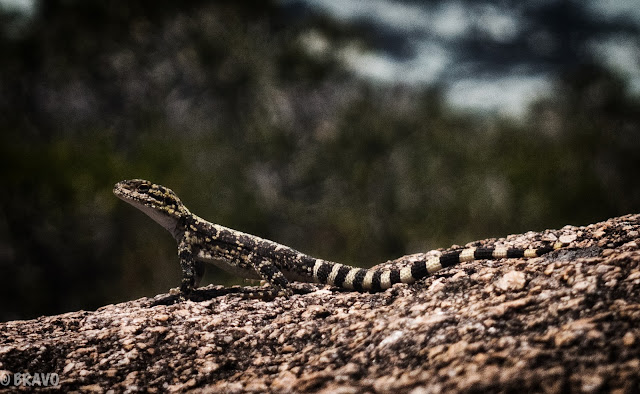 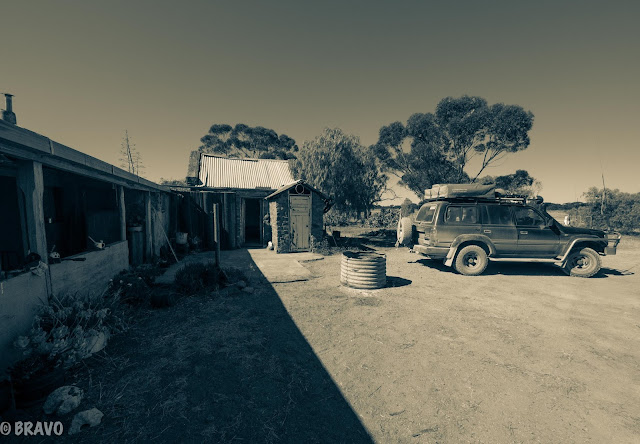 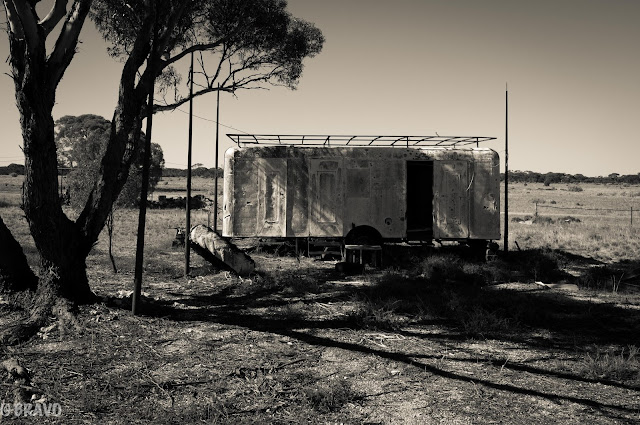 Went through this whacky farm gate which somehow had become a shrine of overland explorers over the years...lots of underwear, motorcycle parts, and other bits and bobs. 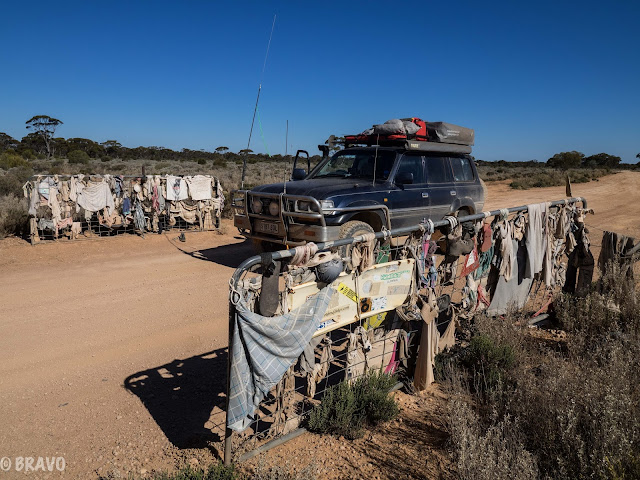 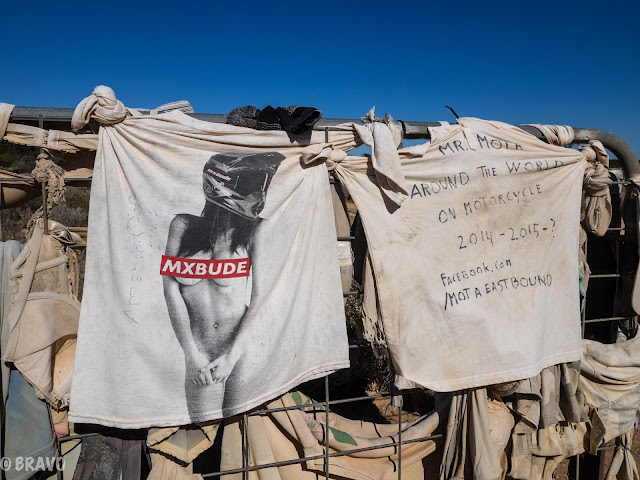 Crossing the Nullarbor (Null=no, arbor=tree.......you got it, "no trees") has always been a hurdle facing travelers in traversing the southern part of Australia.  The old Eyre highway used to be a tough ribbon of dirt, though the newer version is well paved.  Food and fuel are limited to "roadhouses", sort of pub/gas station/motels that appear on the horizon every few hundred clicks on the odometer.  On first inspection, there's just not much else.

But the geology of the region is quite amazing.  Made up of a thin crust of limestone "karst" overlying the soil (it's the largest such single exposure of limestone bedrock in the world) there are cave systems below the surface which go on for several kilometers.  One cave, known as "The Old Homestead Cave", is made up of 34 km of tunnels and chambers on four levels.  We had our headlamps out, and would have loved to explore, but the entry was locked to those without a permit, requiring proper equipment!!!


One quirky roadside attraction in the Nullarbor is the Skylab Museum at the Belladonia Roadhouse.  Back in 1979, the Skylab space station crashed into earth here.  The shire (like a county) sent the US a $400 bill for littering.  Jimmy Carter sent a letter of apology, which is on display in the museum, along with lots of pieces of the debris.  The word is, though, that the fine was never paid!!!

We got off the main, paved road several times to drive on the old dirt highway.  Great sense of history as we found a few old homesteads.  It really gave a feel for the isolation and harshness of life out here in the Nullarbor, which John Edward Eyre, the first European to cross it, called it "the sort of place one gets into in bad dreams"!!! 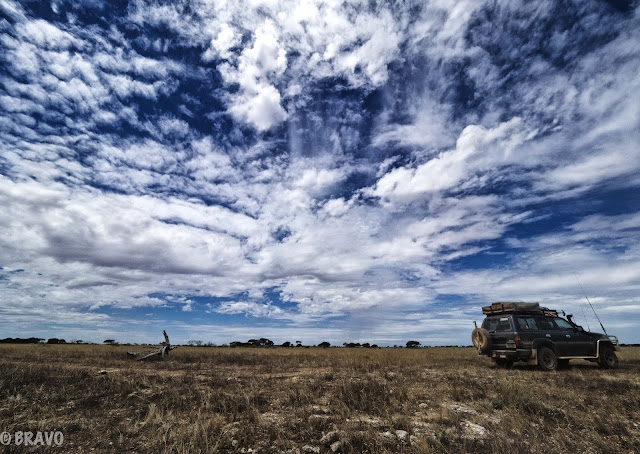 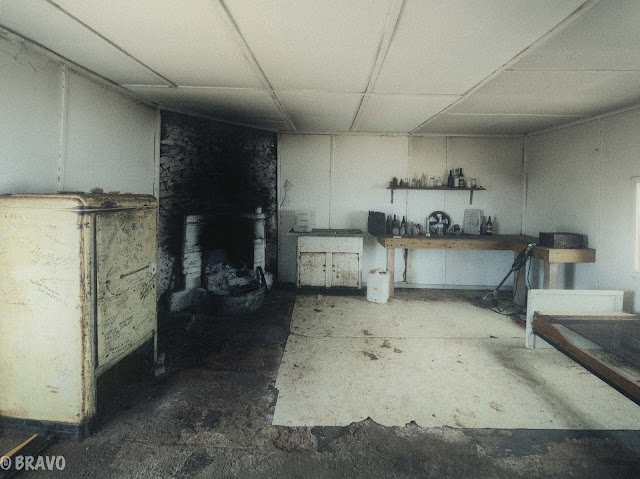 Toward the end of the Nullarbor crossing we crossed back into South Australia from Western Australia, where we've spent the past several months.  As we had some time before our scheduled ferry crossing to Tasmania, we decided to hit a couple of great national parks.


First up was the Gawler Ranges.  Somewhat remote, and completely empty at this time of year due to the summer heat, the park is a 4wd heaven, with most of the park requiring a 4x4 to really explore.  We literally had the entire park to ourselves, and went from campground to campground without seeing another person!!!  Eerie, and beautiful!!! 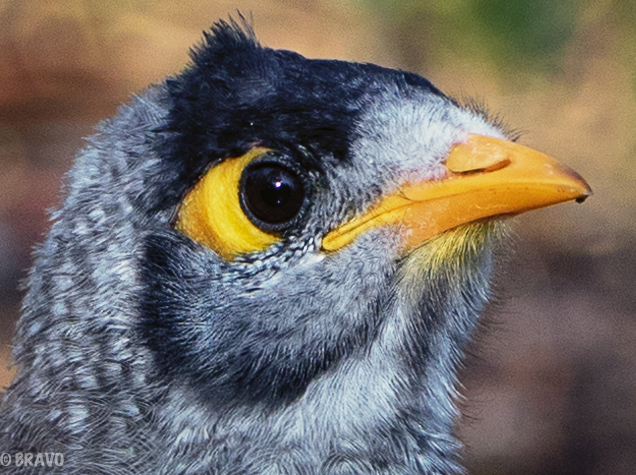 The Flinders Ranges was a terrific park.  Like Gawler, it was mostly deserted due to the heat.....and it was H-O-T.  Temps were hitting 43C (110F) in the heat of the day.  One ranger told us that if we wanted to hike, we needed to hit the trail really early, "before the sun boils the piss outta ya!!"  He had that right!  We hit the trail by about 6:30 for a climb to a beautiful lookout.  Really great views rewarded us for the effort....."Valle la pena" as our Spanish speaking friends would say....."worth it"! 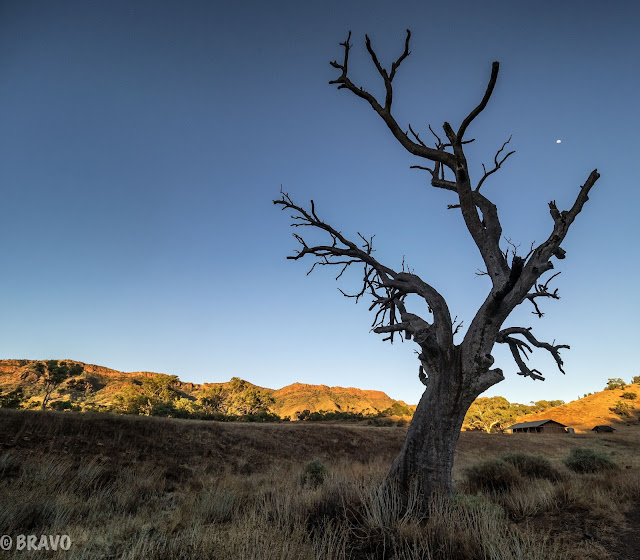 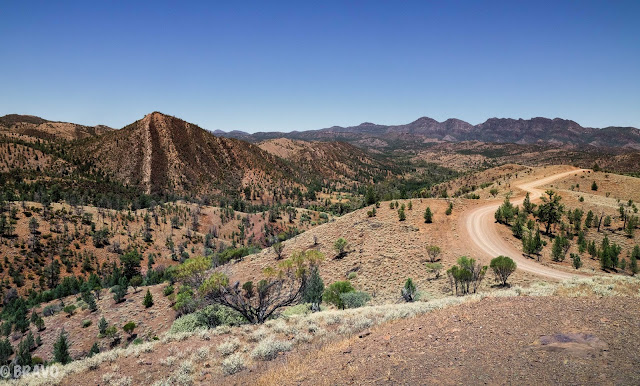 A dramatic lightning storm hit us one evening.  Kind of a PITA when you're sleeping in a tent, but it did provide some fantastic clouds! 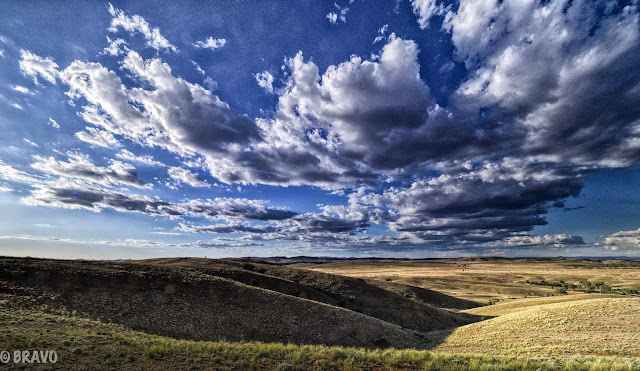 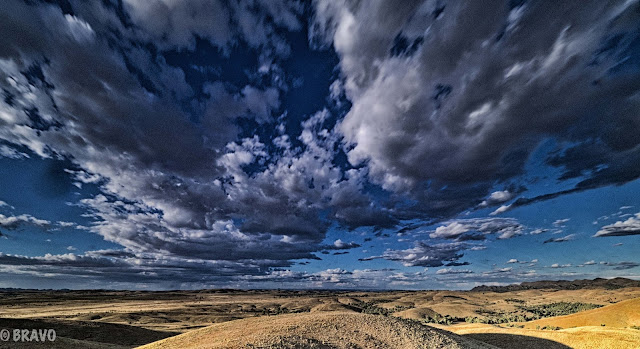 Adam got a bad ankle sprain on one of our Flinders hikes.....x-rays at a local hospital confirmed it was not broken, but looking at the images, the doc remarked, "wow, this foot has had a hard life"!!!!   Well, yeah, I guess!!!  Hopefully the ankle heals quickly.

We finally arrived in Melbourne, where we started this Australian odyssey.  (7 months on the road so far).  We were welcomed by our good cruising mates Don and Deb (s/v 'Buena Vista'), and took the train downtown for Australia Day celebrations.  Good fun, with a multi-cultural parade highlighting the city's ethnic diversity.

Also took in a fantastic David Hockney exhibit at the National Gallery of Victoria, displaying over 700 works from the last decade.  The artist has long been a favorite of Adam's, and his current work, drawn primarily on the iPad and iPhone, showed this creative master still at the top of his game at 79, embracing the new digital media as few others have. 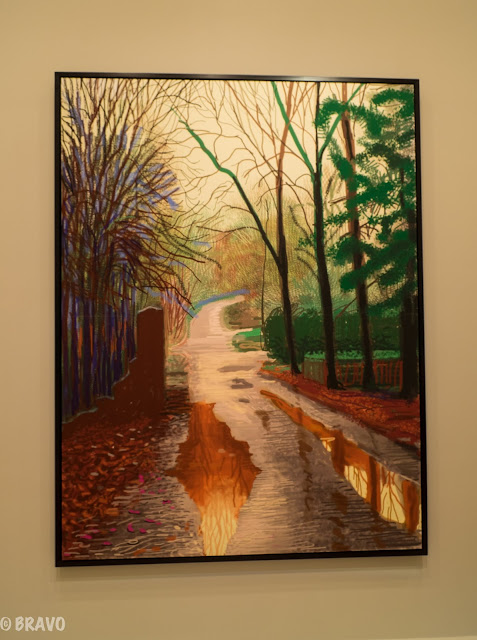 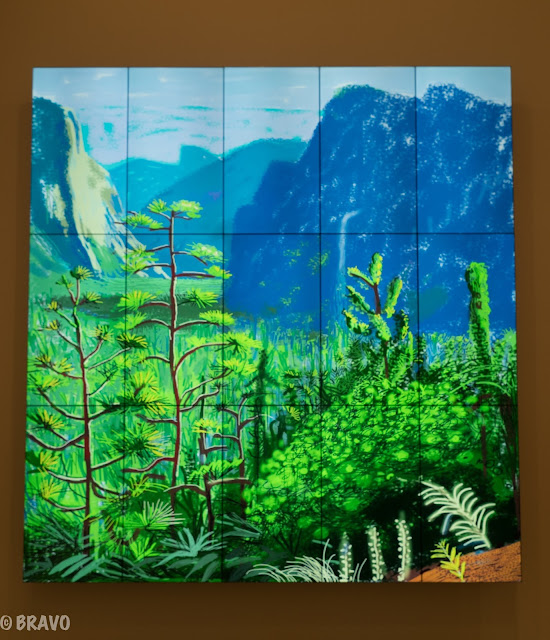 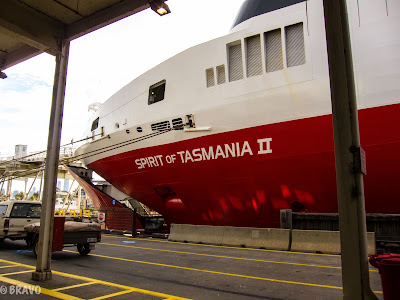 Now on the ferry to Tasmania.  Will rendevous with Don and Deb who have rented a camper van, and head out in search of Tasmanian devils.....adventures await!!!