Well,  more than a few miles have passed under the keel since our last blog post two months ago.  For that, loyal readers (if we still have any!!!), we apologize.  Now in Australia, we've been traveling by planes, trains, automobiles, buses, and, of course, boats.  We'll do a quick catchup of the last few months.


Our last report from Vanuatu was from Espiritu Santo, where we did quite a bit of diving on the reefs and wrecks.  But we still had time for a few more adventures before departing for Chesterfield Reef and Australia.  It was a good place for socializing, and after a fun few weeks exploring the eastern shore of Santo with friends Rich and Cyndi on Legacy, and Matt and Elizabeth on Rubicon, we headed east for a long daysail east to Maewo Island.  We made landfall at a rather open roadstead anchorage near the north end. 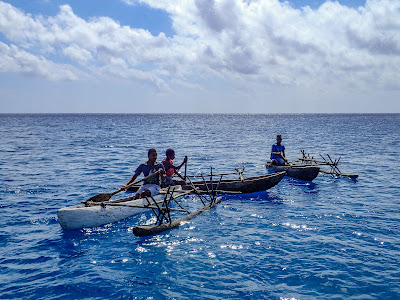 The morning after dropping anchor, we awoke to a steady stream of curious visitors in their dugout canoes.  It seems that few visitors stop here (we were just the 3rd boat this year), and all were eager for some trading opportunities. 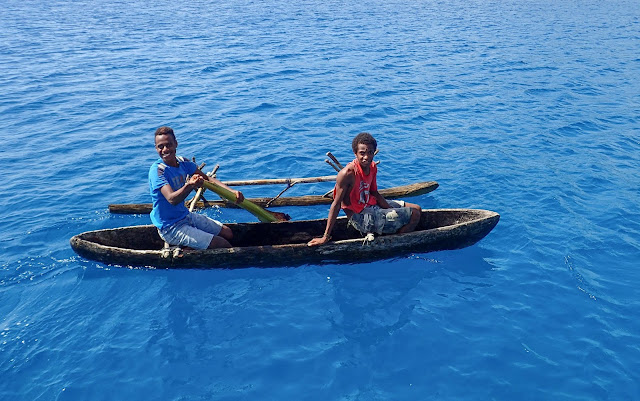 Men, women, and kids all wanted to tour Bravo, none had ever been on a boat larger than a canoe.  We had a great day visiting, and were sad to have to head south to beat a bit of squally weather in the forecast. 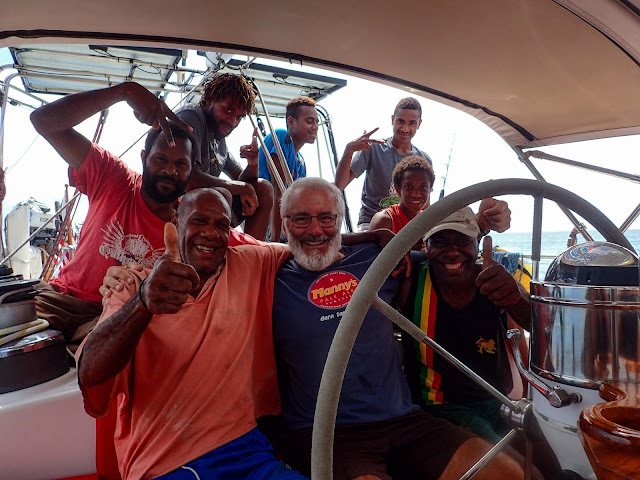 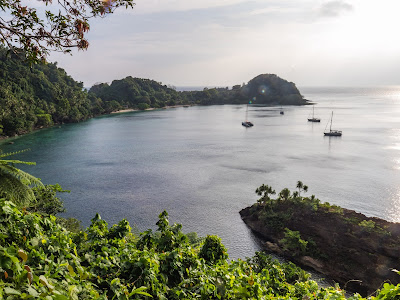 We enjoyed the sheltered anchorage at Asanvari, at the southern tip of Maewo. 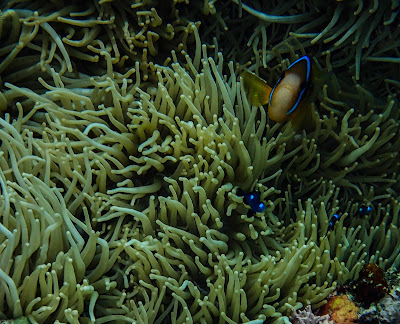 The diving at the point was excellent, and the bay and surrounding landscape was beautiful. 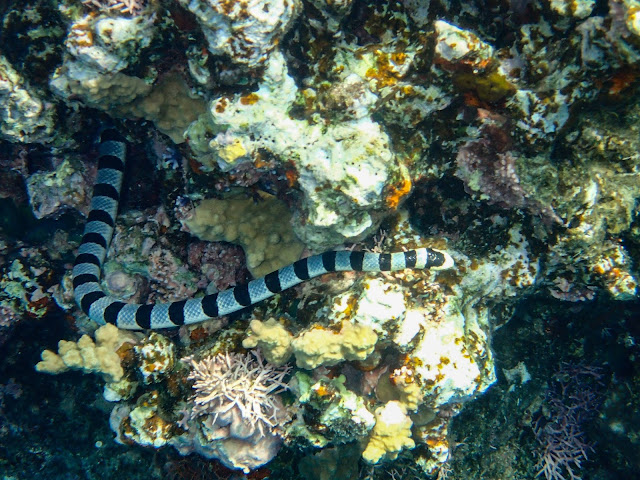 Unfortunately, due to it's near perfect anchorage status, the village is rather inundated by yachts.  The locals were demanding of large gifts and seemed to just want to see how much they could get from us.  We felt a bit used, especially compared to our other interactions in Vanuatu.  I guess you can't blame them, but nonetheless we were quite ready to head south after a few days of exploring the waterfalls and pretty village. 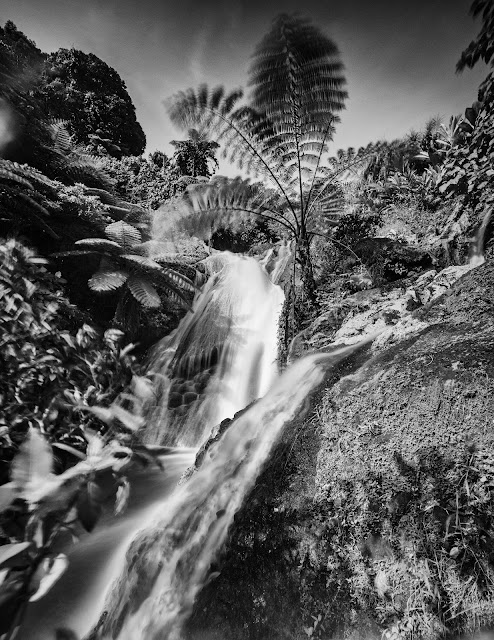 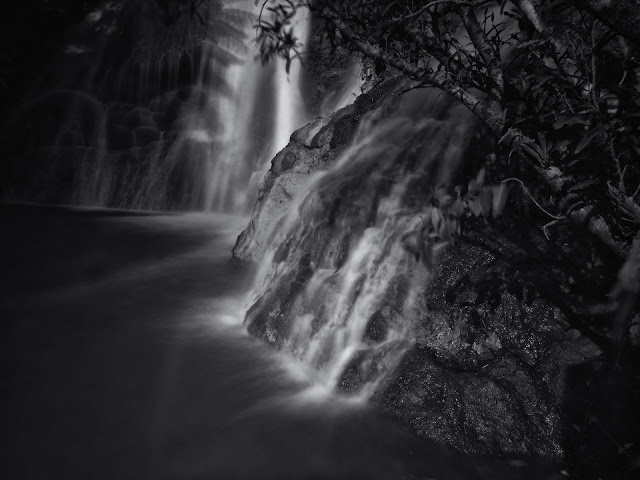 As we were weighing anchor one morning in Asanvari to prepare for a quick sail south, we heard an enormous explosive BOOM!!!  We looked up, and just a few miles to our west, the large volcanic cone on neighboring island Ambae was erupting!!!  The threat level had been raised to "3" a couple of weeks prior, so it was not completely unexpected, but the eruption was spectacular, sending smoke and ash high in the air.  It was to continue erupting (considered level "4") for several more weeks. 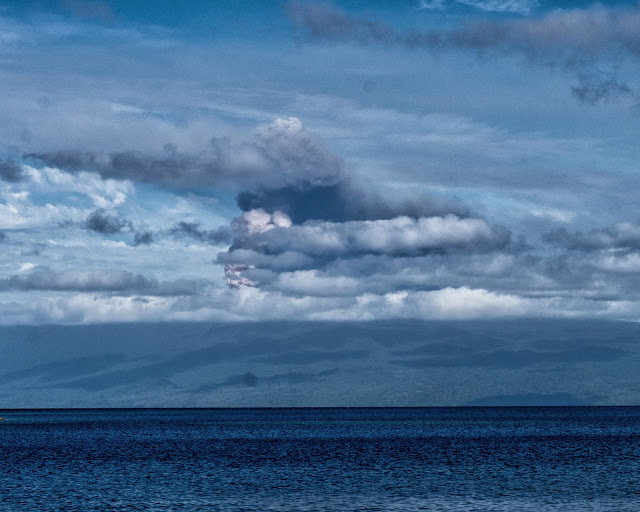 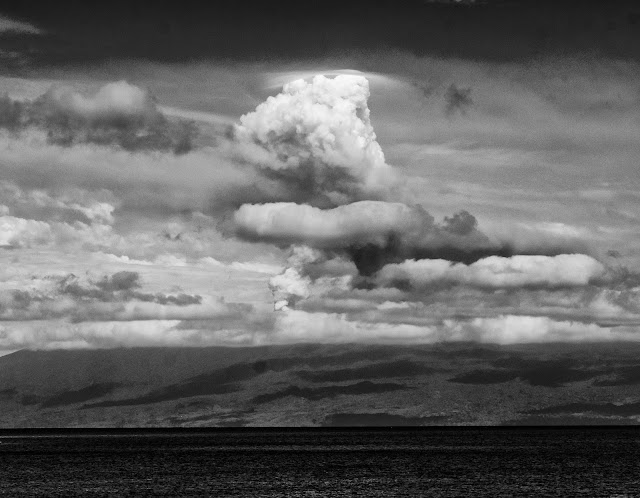 Sadly, the eruption necessitated the evacuation of all 11,500 villagers on the island to neighboring islands.  The people fled with very little more than the clothes on their bodies, and when they were finally allowed to return to their villages weeks later, they found their crops largely destroyed by the acid rain caused by the eruption, their animals dead or dying, and, in some cases, their villages looted.  Our hearts go out to the people of Ambae, and hopefully the recovery from yet another natural disaster (the island was hit hard by Cyclone Pam, a bit over 2 years ago).


As the Ambae eruption began, we got underway for the north end of Pentecost Island, just about 10 miles away.  When we arrived at this beautiful bay, we found the villagers all sitting on the beach, spellbound, watching and listening to the eruption developing on neighboring Ambae.  Most had never seen an eruption before, so this was obviously a big event.  And the speculation was, of course, about what caused the island to erupt, and what might it mean for their island of Pentecost. 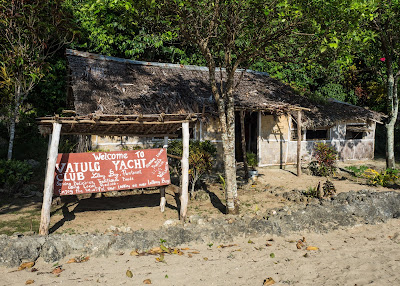 On the beach at the head of Loltong bay we met Mathew and his wife Mary, the proprietors of their local yacht club.  They welcomed us like family, and proceeded to give us a great tour of the village.  We had heard about their hospitality and tasting dinners of local Nivan cuisine, and we arranged for their 10 course (!!!) dinner for the following evening.  Wow!  Mary is a fantastic cook, and their 3 kids took their job of serving us very seriously.  We had a great time with them, and Mathew offered to take us to their garden area the next day, to show us where they grow all of the food up on the mountain behind the house.


Their gardens are about a 30 minute walk up the side of the hill.  We left early to avoid the worst heat of the day, but the temp and humidity were tough on us flat landers!  Finally we all made it, and we first checked out their new garden, just being carved out of the bush and planted with cuttings from the old farm.

We headed over there next, to get the cuttings of tarot, kava, manioc, yams, and island cabbage to transplant.

On the way, we passed through another village near the top of the hill, and Mathew remembered that there was to be a fund raiser in the village that evening.  The chief had the only vehicle on the north end of the island, a nice pickup truck, that all used to bring their crops, especially the bundles of kava, down to the shore to sell to the island trading boats.  They held these fund raisers to raise money to give to the chief to cover his costs to run the truck.  We heard that the bash would begin later that afternoon, and 500 Vatu (about $5.00 USD) would get you a bit of dinner and all the kava you could drink!!!  We already knew that Vanuatu kava was the best in the Pacific, and the kava of Pentecost was reputed to the be best of the Vanuatu swill.....how could we say no??? 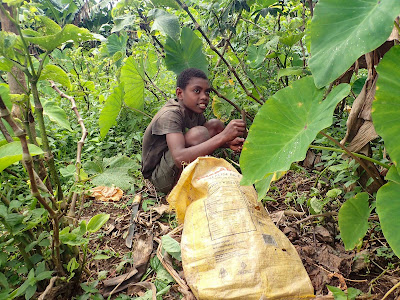 With our load of cuttings we headed back to the new garden plots to get the sprigs, and some seeds in the ground before lunch.  The kids worked the field with us, especially their son, who had been given his own plot to grow kava as a cash crop.  Though primary school is free in Vanuatu, families need to pay for secondary education for their kids.  The boy wanted to go to high school when he gets old enough, about 3 years away.  Kava takes about 3 years to mature for market, so he was planting his garden now to have it ready to sell when he graduates primary school.  We were impressed!!! 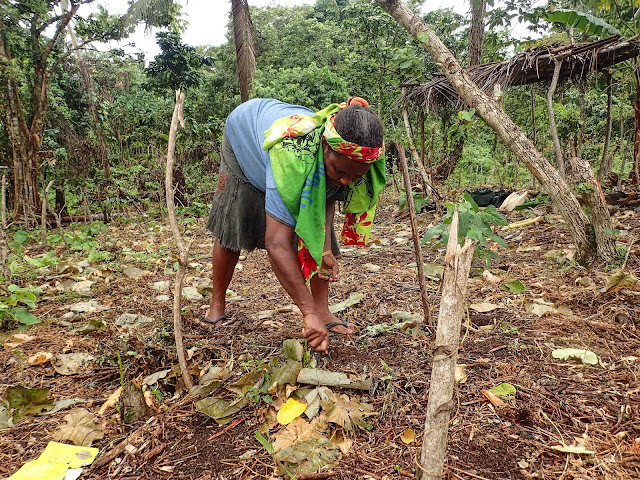 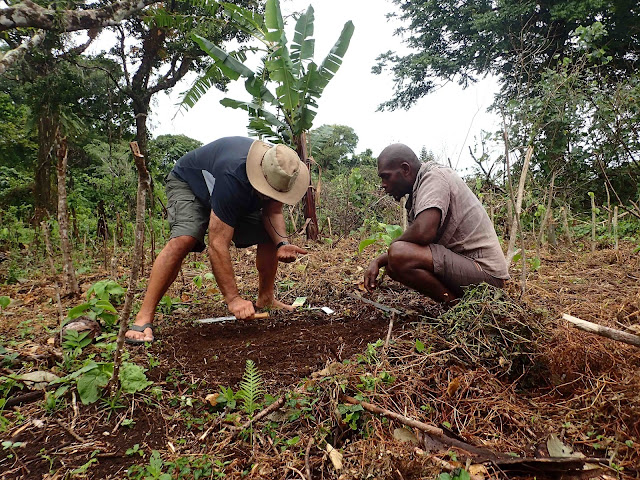 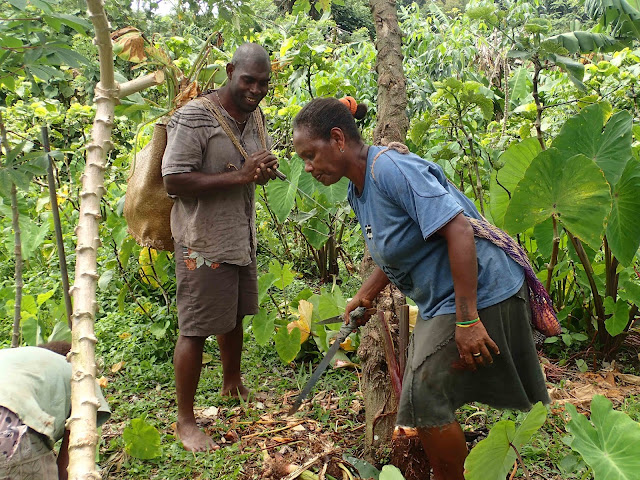 When it was time for lunch, the kids went out and found some yams, taro, plantains, "bush spinach" and coconut.  Mathew built a fire, and they cooked their typical daily meal.  It was great, and we had a terrific time playing farmer for the day. 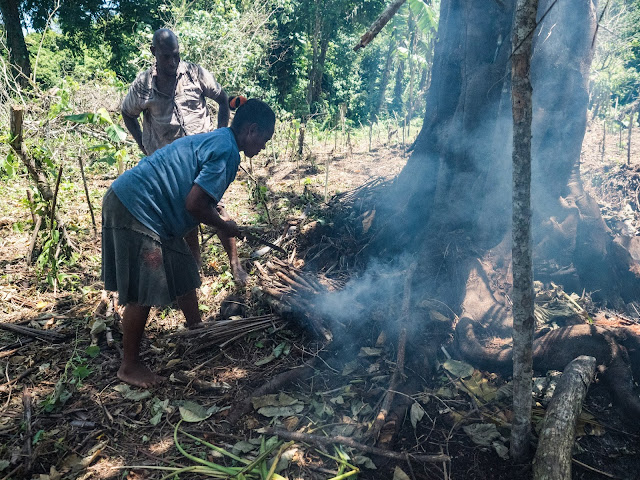 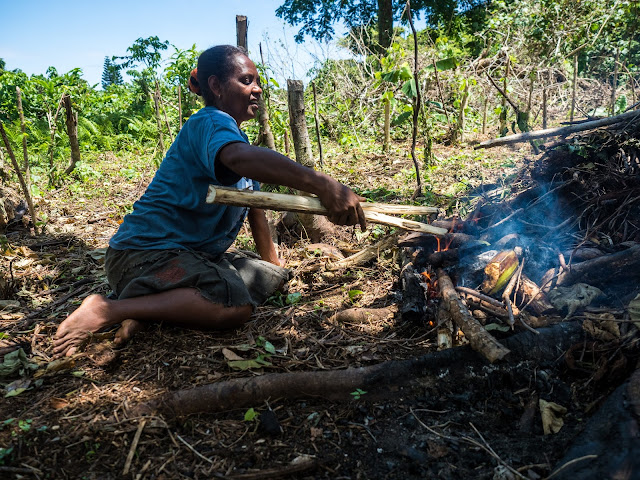 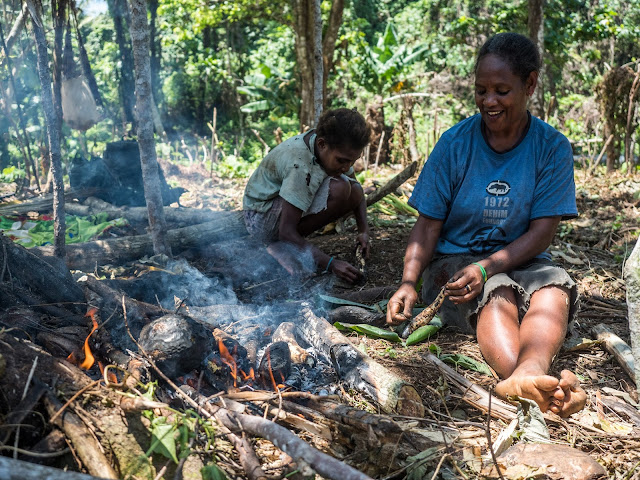 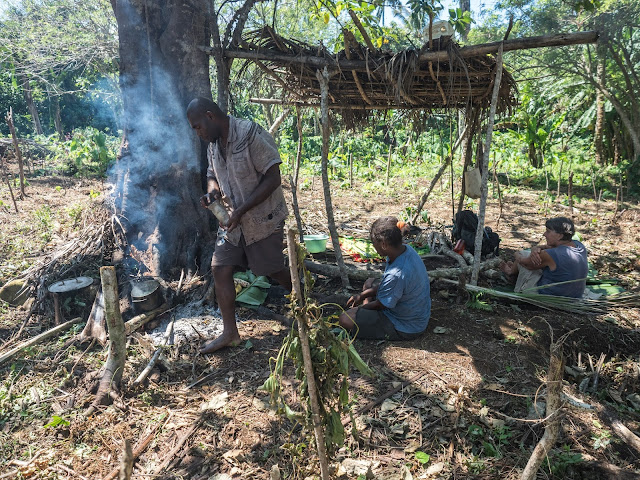 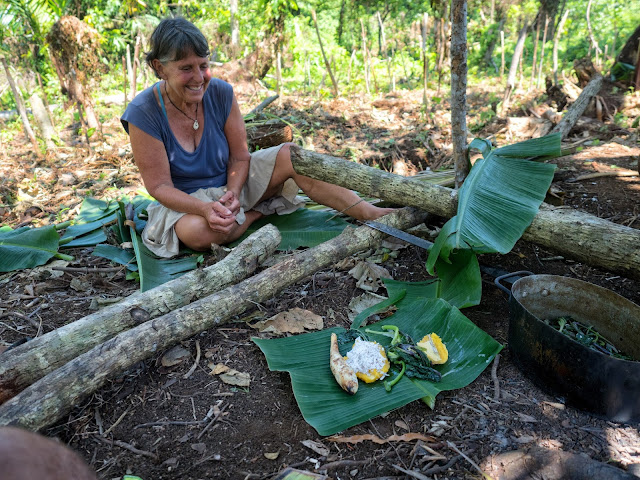 Meanwhile, back at the nakamal, the women of the village were preparing the meal for the fundraiser.  It would cook all day in the open earth ovens. 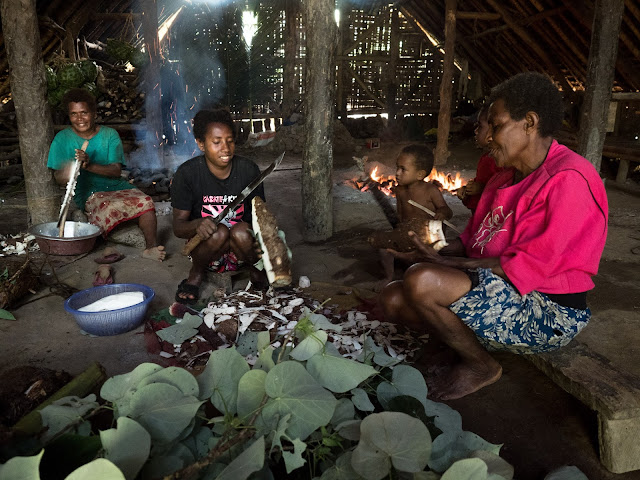 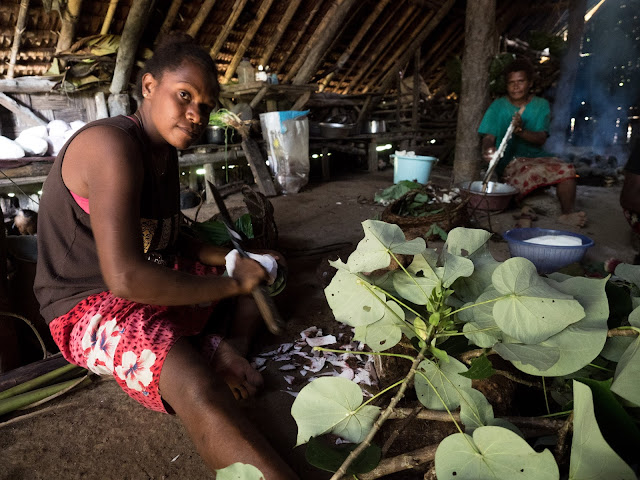 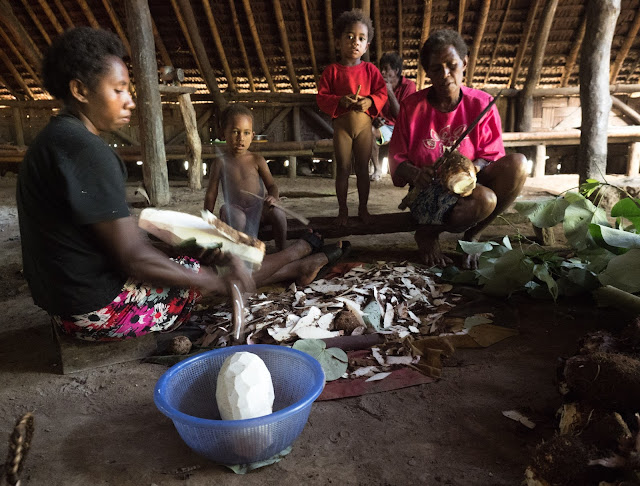 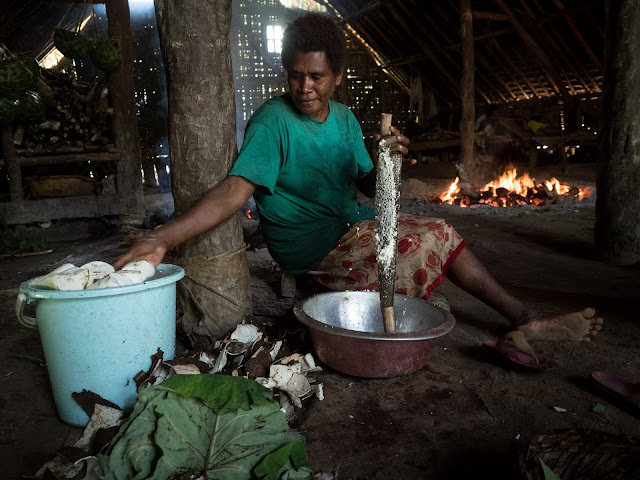 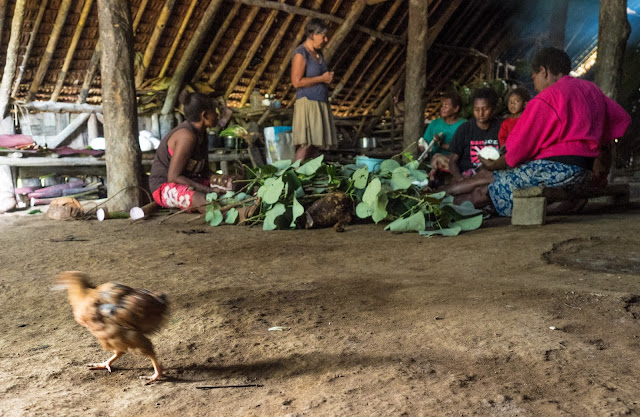 After a bit more planting, it was time to head over to the nakamal, or community long house for the fund raiser.  The men were already at work making vats of kava, and the women had been cooking all day over the open fires in the building.

Cindi had blown out a flip flop in the field, and one old boy was determined to fix it.  He worked his magic using a bush knife and bits of plastic shopping bag twisted into a string for the thong.  He chuckled, "white man makes the shoe, black man fixes"!!!  The repair held for several weeks!!! 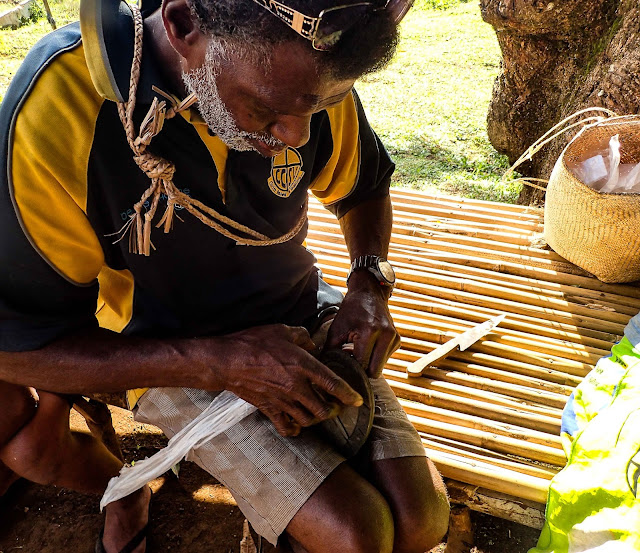 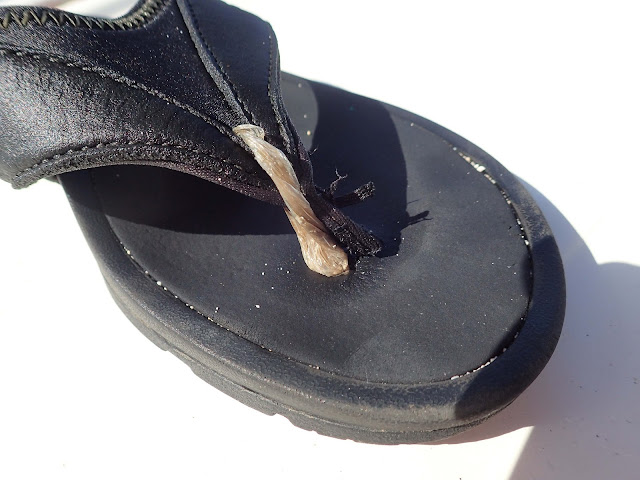 Finally, it was time for kava! 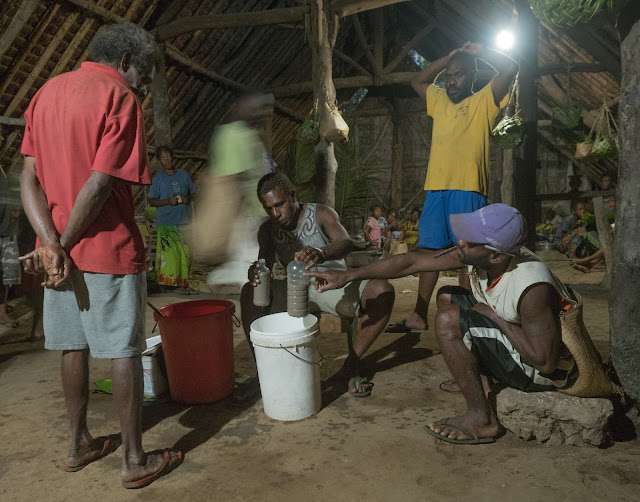 We spent a long evening with the gang, drinking LOTS of grog, and getting to know a bit more about local village life.  A few of them were curious about the US, and seemed especially concerned with whether the US was about to go to war with North Korea!!!  Amazing how bits of news make it into the smallest corners of the world.

Finally the truck showed up at around 10 to give about 20 of us a ride back down the mountain to the lower village in Loltong Bay.  A good day all around!

This wraps up our 4 months of cruising in Vanuatu.  The country is not without its problems, to be sure, but the people could not be friendlier and more welcoming.  We eagerly look forward to our next chance to visit again one day.

Next up, photos of Chesterfield Reef, enroute to Australia.