At our last post, we were anchored in Chamela following Japan's devastating earthquake and the subsequent tsunami which we felt over 7,000 miles away.
We spent nearly a week in Chamela.  Cindi signed up with a local dive shop to get her scuba open water certification.  The instructor was great, and she was the only student in the class!  They did the classroom sessions (and tests) on the front porch of the shop facing the dirt road.  Pool sessions were at a small local hotel.  The four dives were in the island group near the anchorage, reached by local panga.  Lots of wildlife were spotted, including rays, lobster, scorpion fish, nudibranchs, and the myriad of colorful reef fish.  And the best part....of course she passed, and is now a certified diver!!!  We're looking forward to diving as we continue our journey both in Mexico and beyond.
It was interesting anchoring in Chamela this time as compared to our previous visit a couple of months ago on our trip south.  Very few boats remained, with most already heading back north, or south to the South Pacific.  One night there was only one other boat in the large anchorage, whereas at times earlier there had been as many as 20.

We watched the weather closely, and left Chamela one evening for the 100 mile passage past Cabo Corrientes to Banderas Bay / La Cruz.  We left with Ponderosa, a Valiant 47 from Seattle, and had a great sail/motor trip north through the night, arriving in Banderas Bay at dawn.
As we settled into the last leg of the passage, from the Cape to La Cruz, we fired up the watermaker to fill our tanks, as the water in La Cruz is, well, let's just say we weren't wild about drinking it!  After it ran for a few minutes, we heard an engine alarm indicating water in the fuel filter.  Opening the engine compartment, we found that the prefilter intake manifold for the watermaker had sprung a bad leak, and was spraying saltwater all over the engine!!!  A bad thing indeed!!!  So, we shut everything down, cleaned up the mess, changed the fuel filter, and were underway again a couple of hours later, but without the watermaker.  Another project for "the list"!!!
Ah, "the list".....  We arrived in La Cruz to a very different atmosphere than when we were last here in January.  The docks at the marina are full, and an incredible bee hive of activity.  This is a major jumping off point for the "Puddle Jump"...boats leaving the west coast for the South Pacific, typically the Marquesas.  It's also a place where all of the boats who have been cruising Mexico for the past several months are ducking in to refurbish, refit, and repair...cruising full time is indeed hard on gear, and everyone, it seems, is up to their eyeballs in projects of all sorts.  Rigging, engine, bottom, running gear, systems, electronics.....it goes on and on.  It's kind of like a naval fleet coming into port and drydock for needed repairs.  That, coupled with the crossroads of boats with stories to share and old friends to meet up with makes for a great sense of comraderie at the bar....How many stories can start with: "So there we were...." 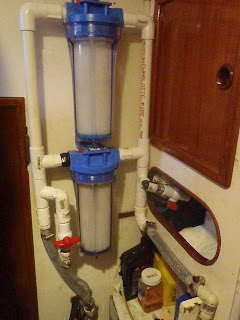 One major project for Bravo was to fix the broken watermaker.  The prefilters are fairly standard items (so we thought).  A factory replacement of the broken manifold was over $400, and we figured we could make our own filter manifold for a few Home Depot water filters and a bunch of pipe fittings.  All good so far....Home Depot is about 1 hour by bus, so the trip somehow takes most of a day!!!  Back with the gear, the second day saw it nearly finished.  Day three, Adam goes to put in the old filters (remember, they're "standard", right???)  Wrong!  The cannisters at Home Depot hold a proprietary filter which is 3/8 inch too short!!!!!  The whole damn thing needed to be started over!  We ended up finding the right filter housings at a pool supply store, and another day, and whole Rube Goldberg contraption is working like a charm, complete with a new fresh water flush system!!!  Success...

While here we had a surprise email from a former coworker of Cindi's, Steve and his wife Laura, vacationing here in Puerto Vallarta for a few days of sun.  They braved the busses to get out to La Cruz, and we had a nice evening together with them at Ana Banana's, listening to a good local blues band.
So here we are at La Cruz, a really great spot to spend time.  Bravo's been getting a thorough cleaning and waxing from the local "boat boys".  We've enjoyed spending time with friends both here and in P.V., and seeing others off on their journey across the Pacific.  A few boats are leaving daily.  Soon it will be our time to depart as well, as we make our way up into the Sea of Cortez for spring.  It looks like we'll have a good weather window to head north up to Mazatlan early next week.  We'll be sorry to leave La Cruz behind, but are really looking to exploring Baja....and know that we'll be back here in the fall as we turn our sights southward....
Posted by Adam at 10:29 AM No comments:

Hola amigos
Yesterday was an interesting day, to be sure.  Being around time to join the migration of northbound boats, we decided to leave Santiago Bay yesterday morning at dawn, to make it up to Chamela by dark, around 60 miles.  We heard about the quake and tsunami on the radio shortly after getting underway.  We were already out to sea at that point, and were, of course, fine.  There were still several hours to go till any tsunami hit down here, and we monitored our radios, both local VHF and long range ham and maritime frequencies.  The next big anchorage up the coast from us was Barra de Navidad.  The lagoon there is very shallow, and has many boats anchored.  They were all on the radio, trying to figure out what to do, and in conversation with the local port capitan.  As the morning unfolded, many, I'm not sure of #'s or %'s, headed out of the anchorage...we were sailing by, around 5 miles offshore at the time, and we saw sails all around and radar blips spilling out of the lagoon, it looked like a major regatta!!!  ....most boats were playing it safe, going out to sea to hang out till the tsunami passed.  Prediction was for 1 to 2 meters.  Someone in the lagoon made a mark on a piling and said it went down 6" and up 11", though this was the first surge, and my understanding is that the next was somewhat larger.  A Mexican navy patrol boat was keeping the beaches cleared, and they eventually closed the lagoon for any entering boats, just allowing boats to leave.  We hear that it remained closed all night.  But then this morning there was a report of a 12" fresh water pipe that goes from the mainland to a small island in Barra that had come loose from the bottom due to currents in the channel, and it is blocking the entrance to the lagoon, trapping the 7 boats that remain.  Yuchhhh.....at least it's a fresh water pipe!!!

We sailed and motored north all day.  Saw a lot of wildlife on the trip, with sea turtles, jumping rays, and dolphins.  Had our closest whale encounter ever, just before anchoring, with two humpback whales feeding no more than 50 feet from the boat.  Truly an amazing sight, if a bit close for comfort!!!  Fishing proved unproductive for fish, but we did catch a brown booby (the bird!!).  The hook had caught him through the webbing in his foot.  We circled back and were able to free him.  It was a real relief to see him flap his wings and take off, perhaps embarrassed to have been fooled by a rubber squid, but hopefully none worse for the experience.  We continued on with light winds, but at least the southerly had us flying the spinnaker much of the afternoon.  Lots of radio chatter as you can imagine.  We finally got to Paraiso, a pretty little anchorage around 8 miles from Chamela (see earlier blog post for description of this tight little spot) and decided to anchor for the night.  For the first time, we couldn't get the anchor, a 90 lb Rocna, to hold, in very wierd, swirly currents.  Another boat next to us was having the same trouble, and both of us (the only 2 in the little bay) decided to head to Chamela, a big bay w/ plenty of swing room.  We anchored here, and wow, the currents were sure strange, turning boats in all different directions, in spite of a steady 10 knot wind.  Small whirlpools everywhere...not dangerous, just unusual, and it made figuring out the anchoring a bit of a crap shoot.

Got the hook set, and settled into a prawn dinner and a movie to relax after a most unusual day.
Backtrack to Santiago and Las Hadas.....
With all of this tsunami chatter, we nearly forgot an update on our Santiago Bay and Las Hadas experiences.  Both Santiago, and the resort around the corner, Las Hadas, were great places to hang out for a few weeks.  Very different vibe in each, but fun experiences to be had at both.  So here are some more photos from the past few weeks..... 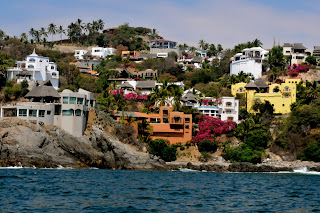 We spent a total of around one week anchored off Las Hadas, enjoying the pools and visiting with friends.  There was quite a contingent of Seattle boats, and we enjoyed seeing 3 other boats from Shilshole marina back home, Ponderosa, Odessa, and Panta Rhei. 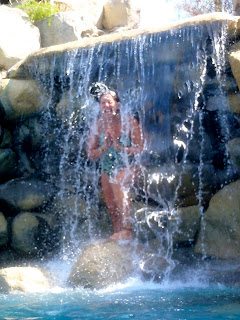 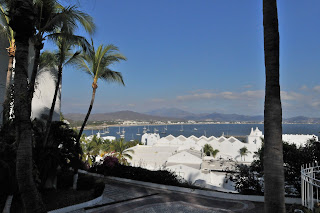 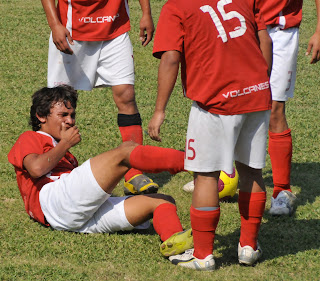 All's going great down here, as we work our way back north.  Cindi is getting her scuba diving certification starting Monday here in Chamela.  The plan is to then head back up to Puerto Vallarta, around 100 miles north, and then up to Mazatlan, where we'll fly home for a week of business and visiting in early April.
Posted by Adam at 11:32 AM No comments: